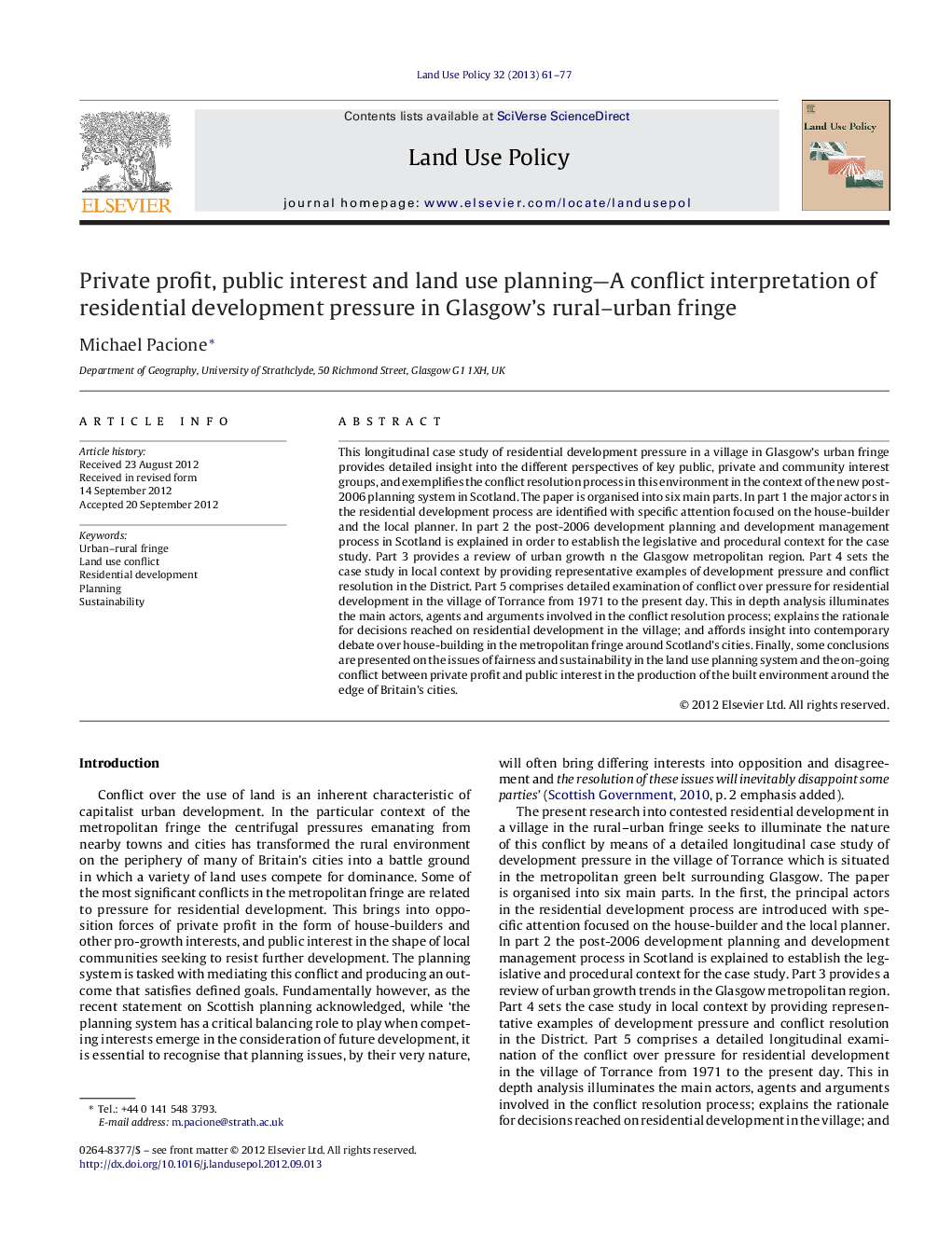 This longitudinal case study of residential development pressure in a village in Glasgow's urban fringe provides detailed insight into the different perspectives of key public, private and community interest groups, and exemplifies the conflict resolution process in this environment in the context of the new post-2006 planning system in Scotland. The paper is organised into six main parts. In part 1 the major actors in the residential development process are identified with specific attention focused on the house-builder and the local planner. In part 2 the post-2006 development planning and development management process in Scotland is explained in order to establish the legislative and procedural context for the case study. Part 3 provides a review of urban growth n the Glasgow metropolitan region. Part 4 sets the case study in local context by providing representative examples of development pressure and conflict resolution in the District. Part 5 comprises detailed examination of conflict over pressure for residential development in the village of Torrance from 1971 to the present day. This in depth analysis illuminates the main actors, agents and arguments involved in the conflict resolution process; explains the rationale for decisions reached on residential development in the village; and affords insight into contemporary debate over house-building in the metropolitan fringe around Scotland's cities. Finally, some conclusions are presented on the issues of fairness and sustainability in the land use planning system and the on-going conflict between private profit and public interest in the production of the built environment around the edge of Britain's cities.

► We identify the main agents and motives in the residential development process in the metropolitan fringe with particular reference to private house-builders and planners.
► We explain the significance of the post-2006 changes in the Scottish development planning system for the balance of power between local communities and housing developers.
► We discuss recent population and urban growth trends in the Glasgow metropolitan region.
► We illustrate the conflictual relationships among developers, planners and local communities in a pressured rural village in the metropolitan greenbelt.
► We present two in-depth case studies of conflict over housing development in Glasgow's rural–urban fringe.
► We provide a number of general conclusions in relation to issues of fairness and sustainability in the Scottish land use planning system, and the ongoing conflict between private profit and public interest in the production of the built environment around the edge of Scotland's cities.