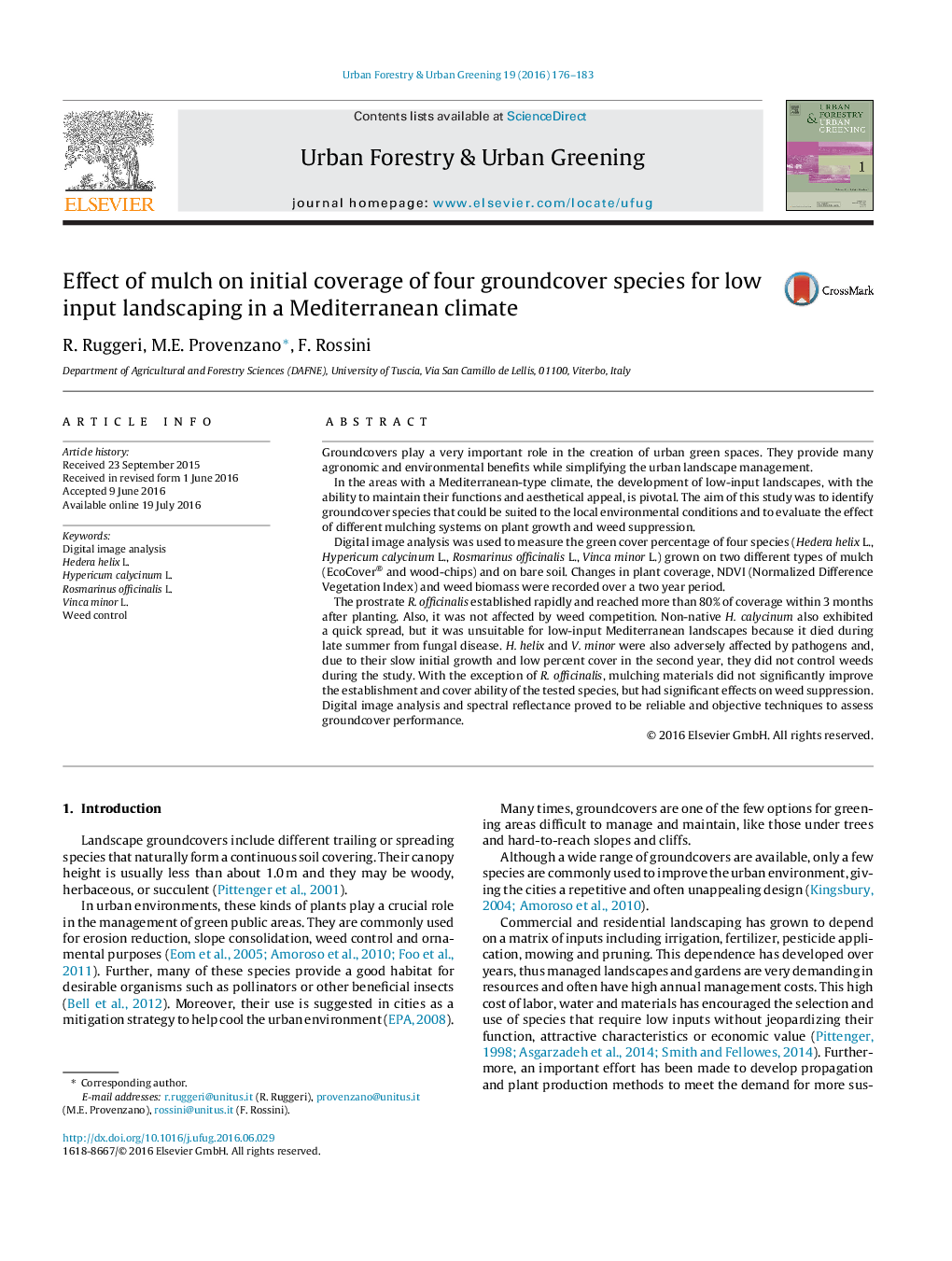 • Rosmarinus officinalis var. ‘prostratus’ could be a useful planting candidate for urban landscaping in Mediterranean climates.
• The presence of mulch significantly affected weed growth and wood-chip was more effective than EcoCover® for controlling weeds.
• NDVI was found to be highly correlated to percent cover of all species tested.
• Spectral reflectance proved to be a reliable technique to assess groundcovers performance especially during the establishment phase.

Groundcovers play a very important role in the creation of urban green spaces. They provide many agronomic and environmental benefits while simplifying the urban landscape management.In the areas with a Mediterranean-type climate, the development of low-input landscapes, with the ability to maintain their functions and aesthetical appeal, is pivotal. The aim of this study was to identify groundcover species that could be suited to the local environmental conditions and to evaluate the effect of different mulching systems on plant growth and weed suppression.Digital image analysis was used to measure the green cover percentage of four species (Hedera helix L., Hypericum calycinum L., Rosmarinus officinalis L., Vinca minor L.) grown on two different types of mulch (EcoCover® and wood-chips) and on bare soil. Changes in plant coverage, NDVI (Normalized Difference Vegetation Index) and weed biomass were recorded over a two year period.The prostrate R. officinalis established rapidly and reached more than 80% of coverage within 3 months after planting. Also, it was not affected by weed competition. Non-native H. calycinum also exhibited a quick spread, but it was unsuitable for low-input Mediterranean landscapes because it died during late summer from fungal disease. H. helix and V. minor were also adversely affected by pathogens and, due to their slow initial growth and low percent cover in the second year, they did not control weeds during the study. With the exception of R. officinalis, mulching materials did not significantly improve the establishment and cover ability of the tested species, but had significant effects on weed suppression. Digital image analysis and spectral reflectance proved to be reliable and objective techniques to assess groundcover performance.