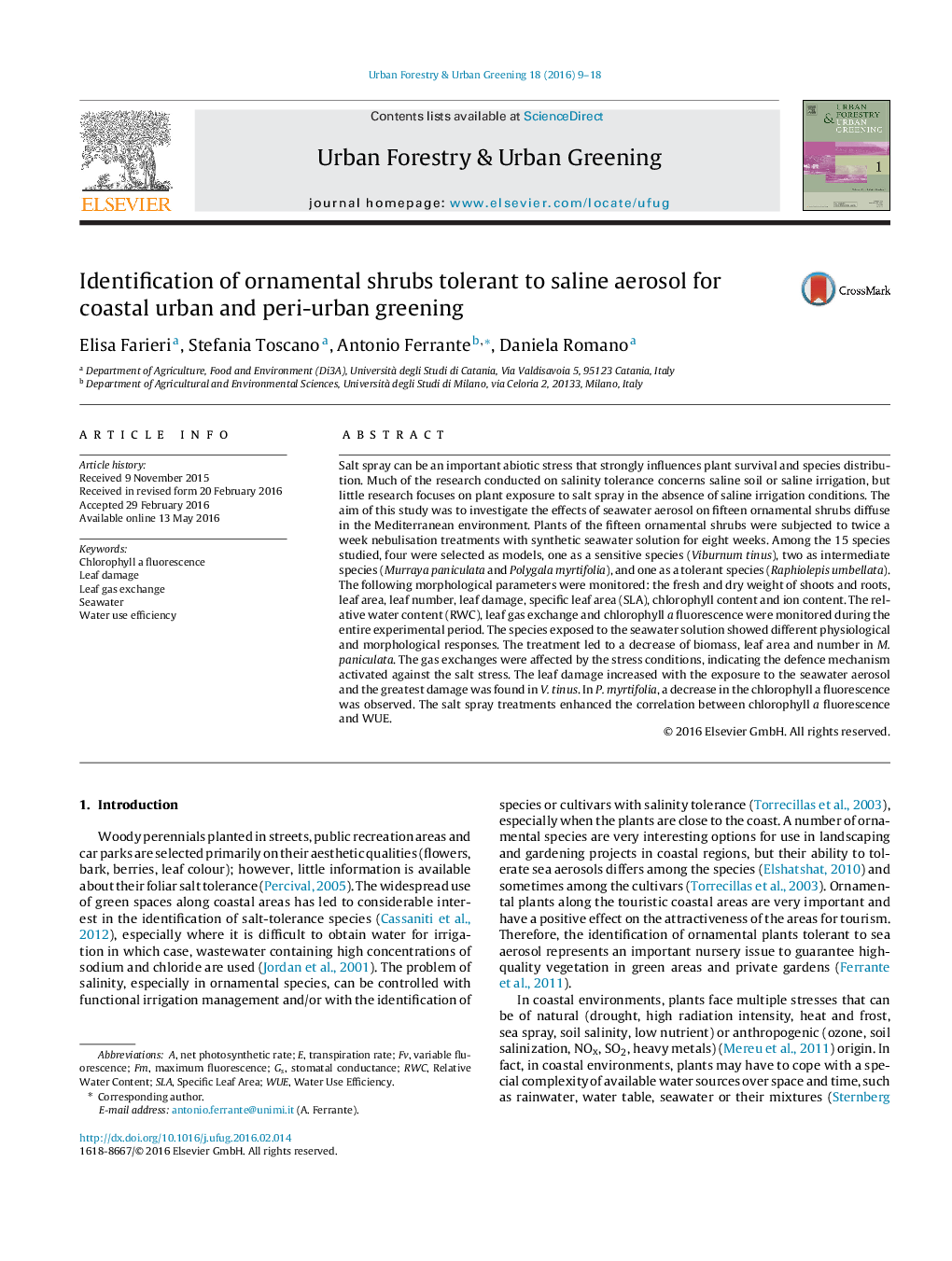 • Fifteen ornamental shrubs subject for 8 weeks to salt sprays were analysed.
• One tolerant, two intermediate and one sensitive species were deeply analysed.
• The species showed different morphological and physiological responses to the salt spray.
• Salt spray treatments enhanced the correlation among chlorophyll a fluorescence and WUE.
• The variability among species in salt spray response showed the relevance of species choice.

Salt spray can be an important abiotic stress that strongly influences plant survival and species distribution. Much of the research conducted on salinity tolerance concerns saline soil or saline irrigation, but little research focuses on plant exposure to salt spray in the absence of saline irrigation conditions. The aim of this study was to investigate the effects of seawater aerosol on fifteen ornamental shrubs diffuse in the Mediterranean environment. Plants of the fifteen ornamental shrubs were subjected to twice a week nebulisation treatments with synthetic seawater solution for eight weeks. Among the 15 species studied, four were selected as models, one as a sensitive species (Viburnum tinus), two as intermediate species (Murraya paniculata and Polygala myrtifolia), and one as a tolerant species (Raphiolepis umbellata). The following morphological parameters were monitored: the fresh and dry weight of shoots and roots, leaf area, leaf number, leaf damage, specific leaf area (SLA), chlorophyll content and ion content. The relative water content (RWC), leaf gas exchange and chlorophyll a fluorescence were monitored during the entire experimental period. The species exposed to the seawater solution showed different physiological and morphological responses. The treatment led to a decrease of biomass, leaf area and number in M. paniculata. The gas exchanges were affected by the stress conditions, indicating the defence mechanism activated against the salt stress. The leaf damage increased with the exposure to the seawater aerosol and the greatest damage was found in V. tinus. In P. myrtifolia, a decrease in the chlorophyll a fluorescence was observed. The salt spray treatments enhanced the correlation between chlorophyll a fluorescence and WUE.