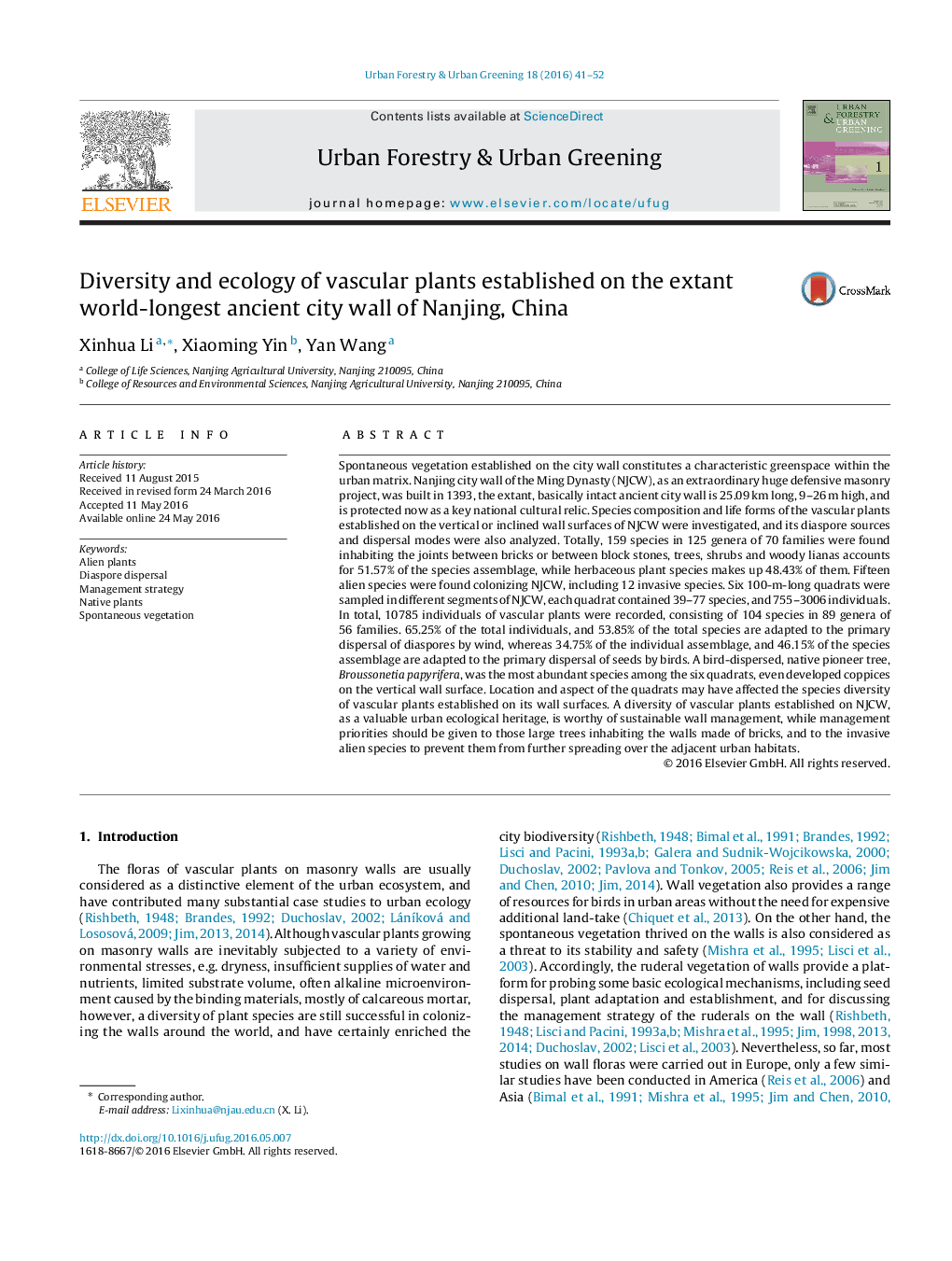 • Spontaneous vascular plants established on the vertical wall surface were surveyed.
• 159 species of vascular plants were found inhabiting the wall surface.
• 15 alien species including 12 invasive species colonize the city wall.
• Birds and wind act as primary dispersal agents of the seeds, fruits or spores.
• Management strategy of the ruderal vegetation on the city wall is suggested.

Spontaneous vegetation established on the city wall constitutes a characteristic greenspace within the urban matrix. Nanjing city wall of the Ming Dynasty (NJCW), as an extraordinary huge defensive masonry project, was built in 1393, the extant, basically intact ancient city wall is 25.09 km long, 9–26 m high, and is protected now as a key national cultural relic. Species composition and life forms of the vascular plants established on the vertical or inclined wall surfaces of NJCW were investigated, and its diaspore sources and dispersal modes were also analyzed. Totally, 159 species in 125 genera of 70 families were found inhabiting the joints between bricks or between block stones, trees, shrubs and woody lianas accounts for 51.57% of the species assemblage, while herbaceous plant species makes up 48.43% of them. Fifteen alien species were found colonizing NJCW, including 12 invasive species. Six 100-m-long quadrats were sampled in different segments of NJCW, each quadrat contained 39–77 species, and 755–3006 individuals. In total, 10785 individuals of vascular plants were recorded, consisting of 104 species in 89 genera of 56 families. 65.25% of the total individuals, and 53.85% of the total species are adapted to the primary dispersal of diaspores by wind, whereas 34.75% of the individual assemblage, and 46.15% of the species assemblage are adapted to the primary dispersal of seeds by birds. A bird-dispersed, native pioneer tree, Broussonetia papyrifera, was the most abundant species among the six quadrats, even developed coppices on the vertical wall surface. Location and aspect of the quadrats may have affected the species diversity of vascular plants established on its wall surfaces. A diversity of vascular plants established on NJCW, as a valuable urban ecological heritage, is worthy of sustainable wall management, while management priorities should be given to those large trees inhabiting the walls made of bricks, and to the invasive alien species to prevent them from further spreading over the adjacent urban habitats.