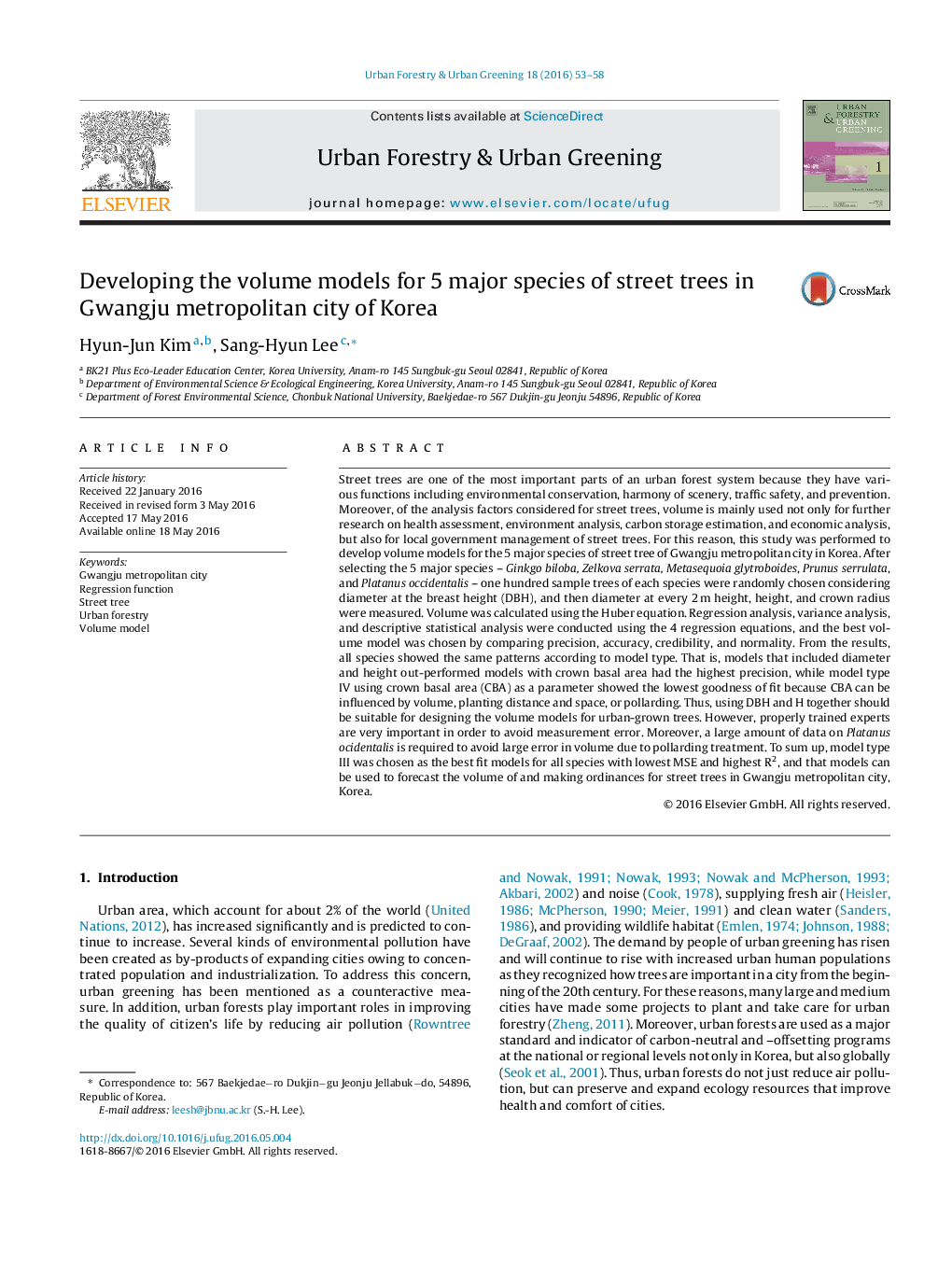 • If DBH and H are used as independent variables, the accuracy and precision of the model were increased.
• Using DBH or H to develop growth models for street trees might be more rational than using CBA.
• Height can be different and variable under artificial control like pollarding even if DBH is the same.

Street trees are one of the most important parts of an urban forest system because they have various functions including environmental conservation, harmony of scenery, traffic safety, and prevention. Moreover, of the analysis factors considered for street trees, volume is mainly used not only for further research on health assessment, environment analysis, carbon storage estimation, and economic analysis, but also for local government management of street trees. For this reason, this study was performed to develop volume models for the 5 major species of street tree of Gwangju metropolitan city in Korea. After selecting the 5 major species – Ginkgo biloba, Zelkova serrata, Metasequoia glytroboides, Prunus serrulata, and Platanus occidentalis – one hundred sample trees of each species were randomly chosen considering diameter at the breast height (DBH), and then diameter at every 2 m height, height, and crown radius were measured. Volume was calculated using the Huber equation. Regression analysis, variance analysis, and descriptive statistical analysis were conducted using the 4 regression equations, and the best volume model was chosen by comparing precision, accuracy, credibility, and normality. From the results, all species showed the same patterns according to model type. That is, models that included diameter and height out-performed models with crown basal area had the highest precision, while model type IV using crown basal area (CBA) as a parameter showed the lowest goodness of fit because CBA can be influenced by volume, planting distance and space, or pollarding. Thus, using DBH and H together should be suitable for designing the volume models for urban-grown trees. However, properly trained experts are very important in order to avoid measurement error. Moreover, a large amount of data on Platanus ocidentalis is required to avoid large error in volume due to pollarding treatment. To sum up, model type III was chosen as the best fit models for all species with lowest MSE and highest R2, and that models can be used to forecast the volume of and making ordinances for street trees in Gwangju metropolitan city, Korea.