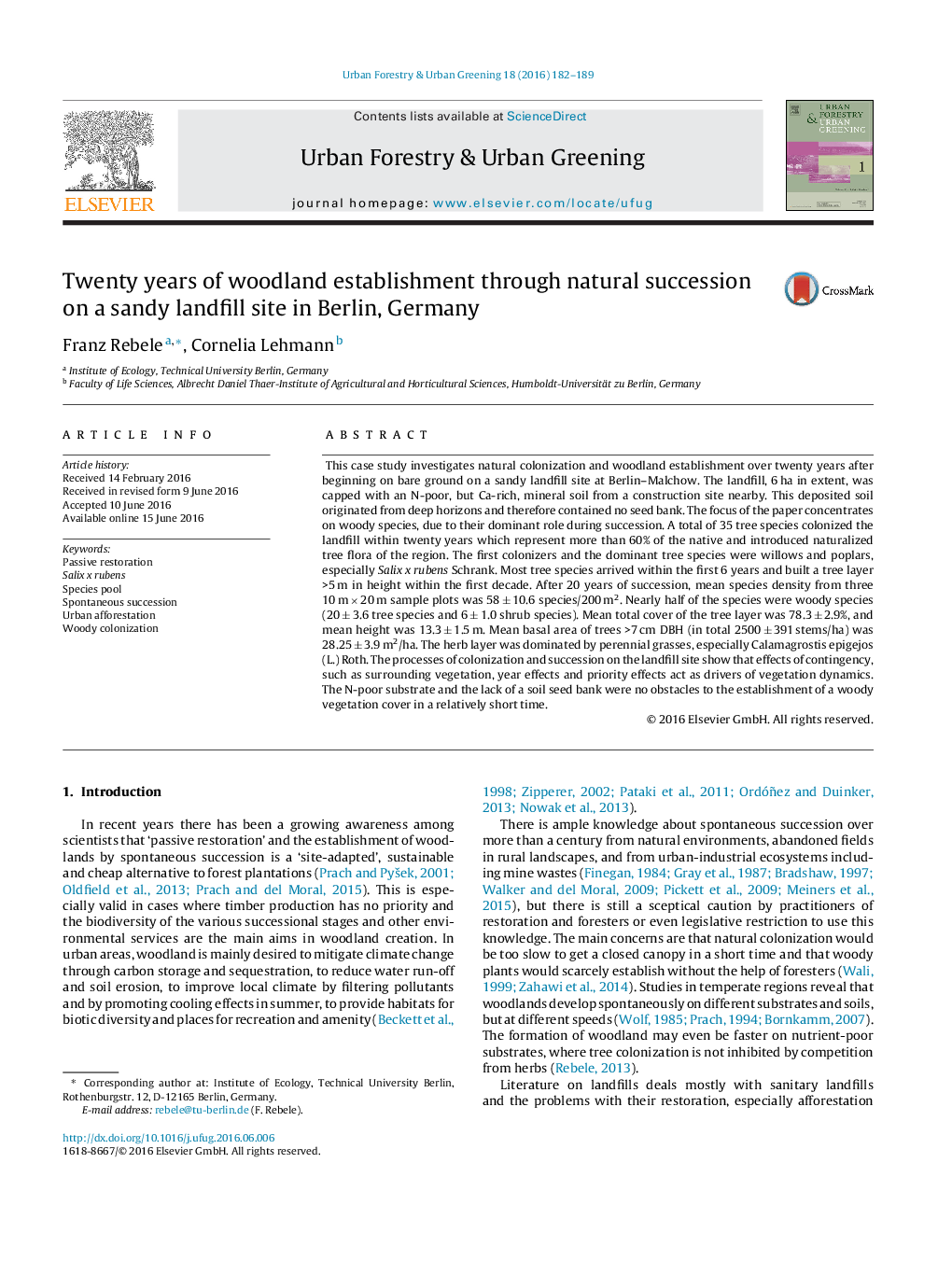 • We report a rare long-term study of woody colonization on nutrient-poor soil.
• Woodland establishment and succession starting on raw soil was very rapid.
• A former landfill bordering on wetland is part of a nature reserve.
• We demonstrate a successful approach to urban afforestation.
• Contingency and the surrounding landscape played an important role.

This case study investigates natural colonization and woodland establishment over twenty years after beginning on bare ground on a sandy landfill site at Berlin–Malchow. The landfill, 6 ha in extent, was capped with an N-poor, but Ca-rich, mineral soil from a construction site nearby. This deposited soil originated from deep horizons and therefore contained no seed bank. The focus of the paper concentrates on woody species, due to their dominant role during succession. A total of 35 tree species colonized the landfill within twenty years which represent more than 60% of the native and introduced naturalized tree flora of the region. The first colonizers and the dominant tree species were willows and poplars, especially Salix x rubens Schrank. Most tree species arrived within the first 6 years and built a tree layer >5 m in height within the first decade. After 20 years of succession, mean species density from three 10 m × 20 m sample plots was 58 ± 10.6 species/200 m2. Nearly half of the species were woody species (20 ± 3.6 tree species and 6 ± 1.0 shrub species). Mean total cover of the tree layer was 78.3 ± 2.9%, and mean height was 13.3 ± 1.5 m. Mean basal area of trees >7 cm DBH (in total 2500 ± 391 stems/ha) was 28.25 ± 3.9 m2/ha. The herb layer was dominated by perennial grasses, especially Calamagrostis epigejos (L.) Roth. The processes of colonization and succession on the landfill site show that effects of contingency, such as surrounding vegetation, year effects and priority effects act as drivers of vegetation dynamics. The N-poor substrate and the lack of a soil seed bank were no obstacles to the establishment of a woody vegetation cover in a relatively short time.