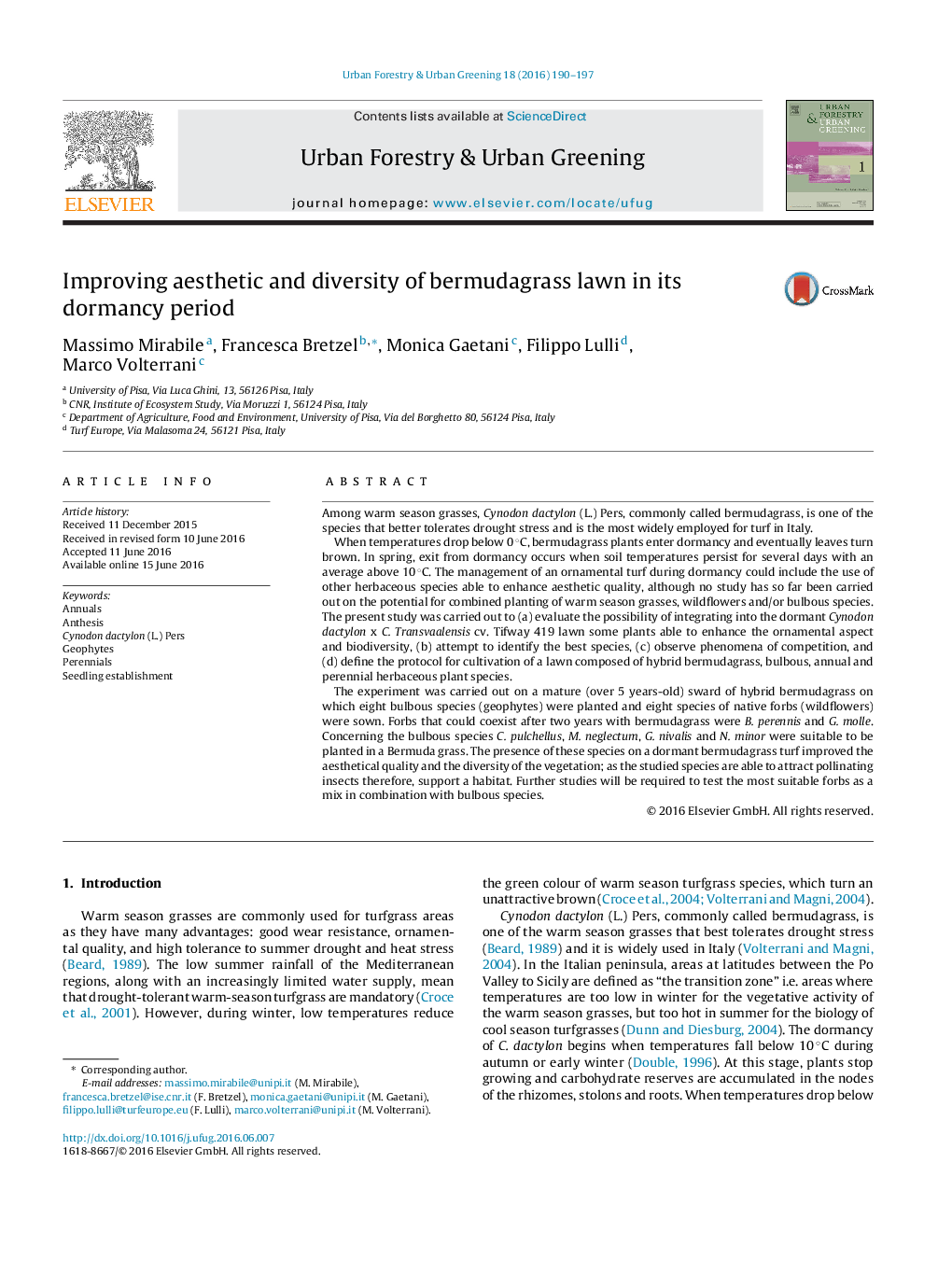 • Forbs species could coexist after two years with bermudagrass mowing regimes.
• B. perennis, L. tuberosus and G. molle are promising for adding flowering to turf.
• Bulbs flowered and greatly improved the aesthetic value and biodiversity of turf.
• Promising practical implications for use in ornamental turf.
• Further research should focus on the self-sustainability of the species in a mix over time.

Among warm season grasses, Cynodon dactylon (L.) Pers, commonly called bermudagrass, is one of the species that better tolerates drought stress and is the most widely employed for turf in Italy.When temperatures drop below 0 °C, bermudagrass plants enter dormancy and eventually leaves turn brown. In spring, exit from dormancy occurs when soil temperatures persist for several days with an average above 10 °C. The management of an ornamental turf during dormancy could include the use of other herbaceous species able to enhance aesthetic quality, although no study has so far been carried out on the potential for combined planting of warm season grasses, wildflowers and/or bulbous species. The present study was carried out to (a) evaluate the possibility of integrating into the dormant Cynodon dactylon x C. Transvaalensis cv. Tifway 419 lawn some plants able to enhance the ornamental aspect and biodiversity, (b) attempt to identify the best species, (c) observe phenomena of competition, and (d) define the protocol for cultivation of a lawn composed of hybrid bermudagrass, bulbous, annual and perennial herbaceous plant species.The experiment was carried out on a mature (over 5 years-old) sward of hybrid bermudagrass on which eight bulbous species (geophytes) were planted and eight species of native forbs (wildflowers) were sown. Forbs that could coexist after two years with bermudagrass were B. perennis and G. molle. Concerning the bulbous species C. pulchellus, M. neglectum, G. nivalis and N. minor were suitable to be planted in a Bermuda grass. The presence of these species on a dormant bermudagrass turf improved the aesthetical quality and the diversity of the vegetation; as the studied species are able to attract pollinating insects therefore, support a habitat. Further studies will be required to test the most suitable forbs as a mix in combination with bulbous species.