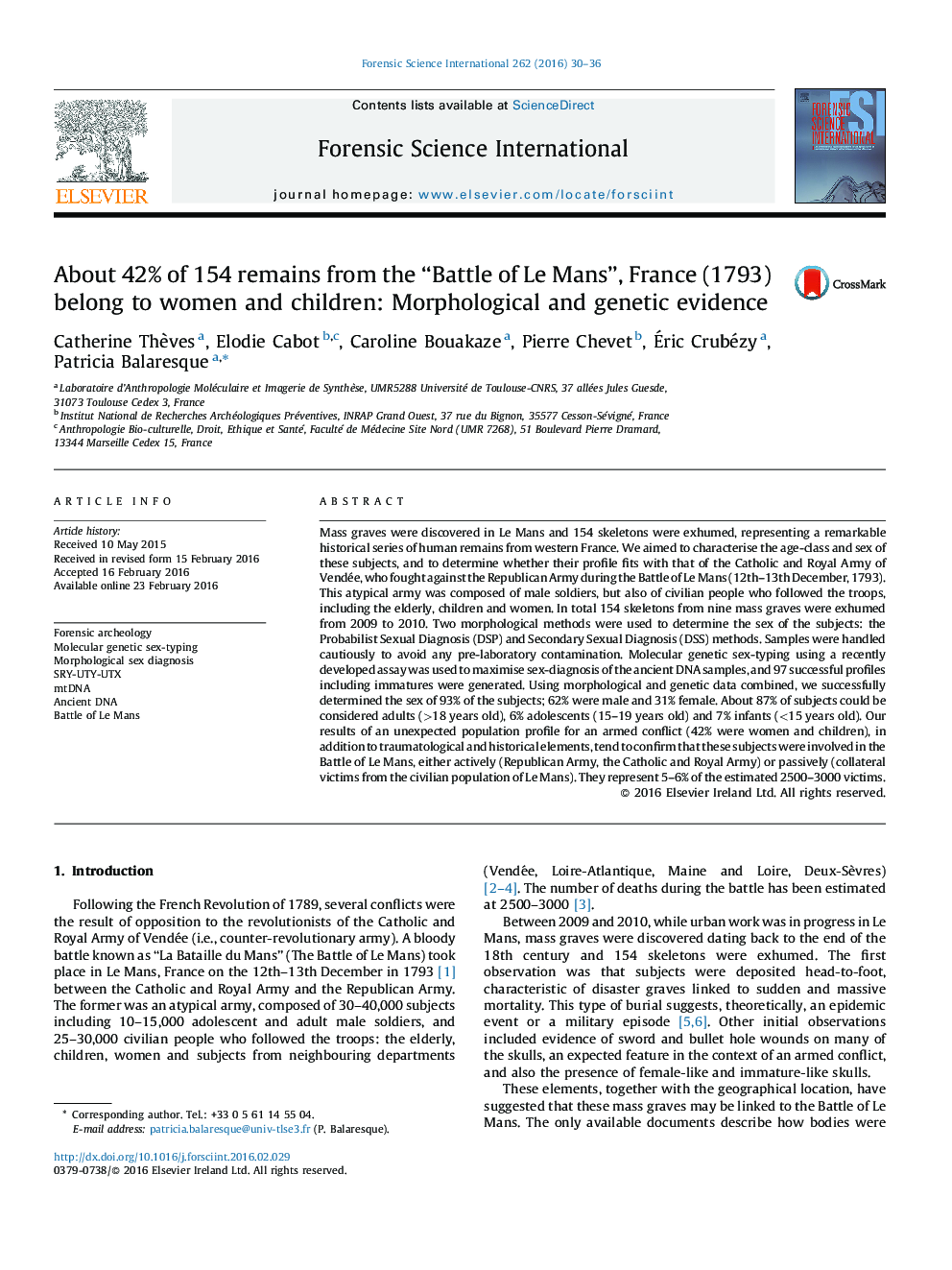 • Mass graves were discovered in Le Mans, 154 skeletons exhumed.
• Are age-class and sex profiles the ones of the Catholic and Royal Army of Vendée?
• Morphological and genetic data confirm 2/3 of subjects were males, 1/3 females.
• 87% of subjects were considered adults, 6% adolescents, 7% infants.
• Unexpected population profile for an armed conflict: subjects were very likely involved in the Battle of Le Mans.

Mass graves were discovered in Le Mans and 154 skeletons were exhumed, representing a remarkable historical series of human remains from western France. We aimed to characterise the age-class and sex of these subjects, and to determine whether their profile fits with that of the Catholic and Royal Army of Vendée, who fought against the Republican Army during the Battle of Le Mans (12th–13th December, 1793). This atypical army was composed of male soldiers, but also of civilian people who followed the troops, including the elderly, children and women. In total 154 skeletons from nine mass graves were exhumed from 2009 to 2010. Two morphological methods were used to determine the sex of the subjects: the Probabilist Sexual Diagnosis (DSP) and Secondary Sexual Diagnosis (DSS) methods. Samples were handled cautiously to avoid any pre-laboratory contamination. Molecular genetic sex-typing using a recently developed assay was used to maximise sex-diagnosis of the ancient DNA samples, and 97 successful profiles including immatures were generated. Using morphological and genetic data combined, we successfully determined the sex of 93% of the subjects; 62% were male and 31% female. About 87% of subjects could be considered adults (>18 years old), 6% adolescents (15–19 years old) and 7% infants (<15 years old). Our results of an unexpected population profile for an armed conflict (42% were women and children), in addition to traumatological and historical elements, tend to confirm that these subjects were involved in the Battle of Le Mans, either actively (Republican Army, the Catholic and Royal Army) or passively (collateral victims from the civilian population of Le Mans). They represent 5–6% of the estimated 2500–3000 victims.