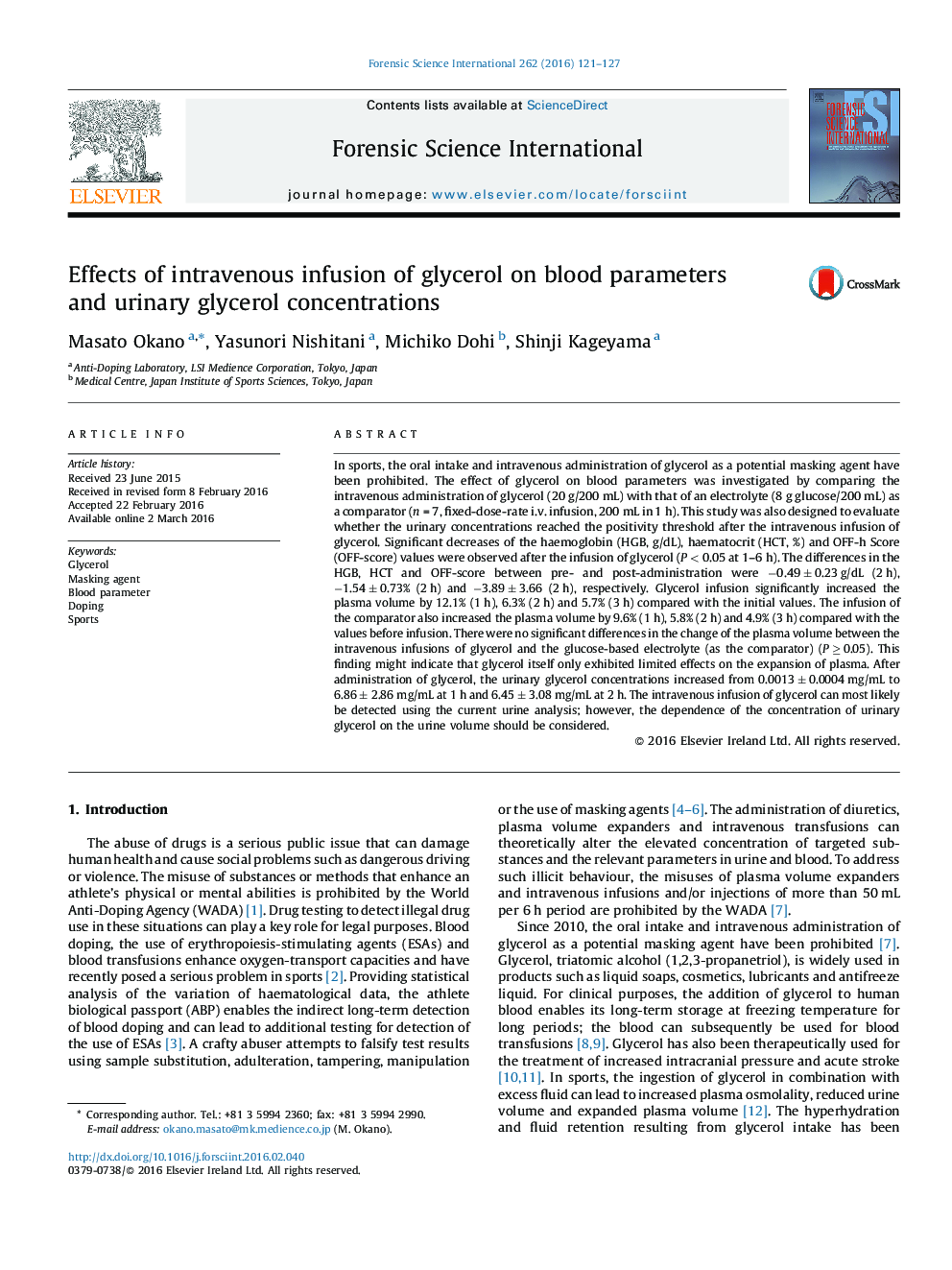 In sports, the oral intake and intravenous administration of glycerol as a potential masking agent have been prohibited. The effect of glycerol on blood parameters was investigated by comparing the intravenous administration of glycerol (20 g/200 mL) with that of an electrolyte (8 g glucose/200 mL) as a comparator (n = 7, fixed-dose-rate i.v. infusion, 200 mL in 1 h). This study was also designed to evaluate whether the urinary concentrations reached the positivity threshold after the intravenous infusion of glycerol. Significant decreases of the haemoglobin (HGB, g/dL), haematocrit (HCT, %) and OFF-h Score (OFF-score) values were observed after the infusion of glycerol (P < 0.05 at 1–6 h). The differences in the HGB, HCT and OFF-score between pre- and post-administration were −0.49 ± 0.23 g/dL (2 h), −1.54 ± 0.73% (2 h) and −3.89 ± 3.66 (2 h), respectively. Glycerol infusion significantly increased the plasma volume by 12.1% (1 h), 6.3% (2 h) and 5.7% (3 h) compared with the initial values. The infusion of the comparator also increased the plasma volume by 9.6% (1 h), 5.8% (2 h) and 4.9% (3 h) compared with the values before infusion. There were no significant differences in the change of the plasma volume between the intravenous infusions of glycerol and the glucose-based electrolyte (as the comparator) (P ≥ 0.05). This finding might indicate that glycerol itself only exhibited limited effects on the expansion of plasma. After administration of glycerol, the urinary glycerol concentrations increased from 0.0013 ± 0.0004 mg/mL to 6.86 ± 2.86 mg/mL at 1 h and 6.45 ± 3.08 mg/mL at 2 h. The intravenous infusion of glycerol can most likely be detected using the current urine analysis; however, the dependence of the concentration of urinary glycerol on the urine volume should be considered.