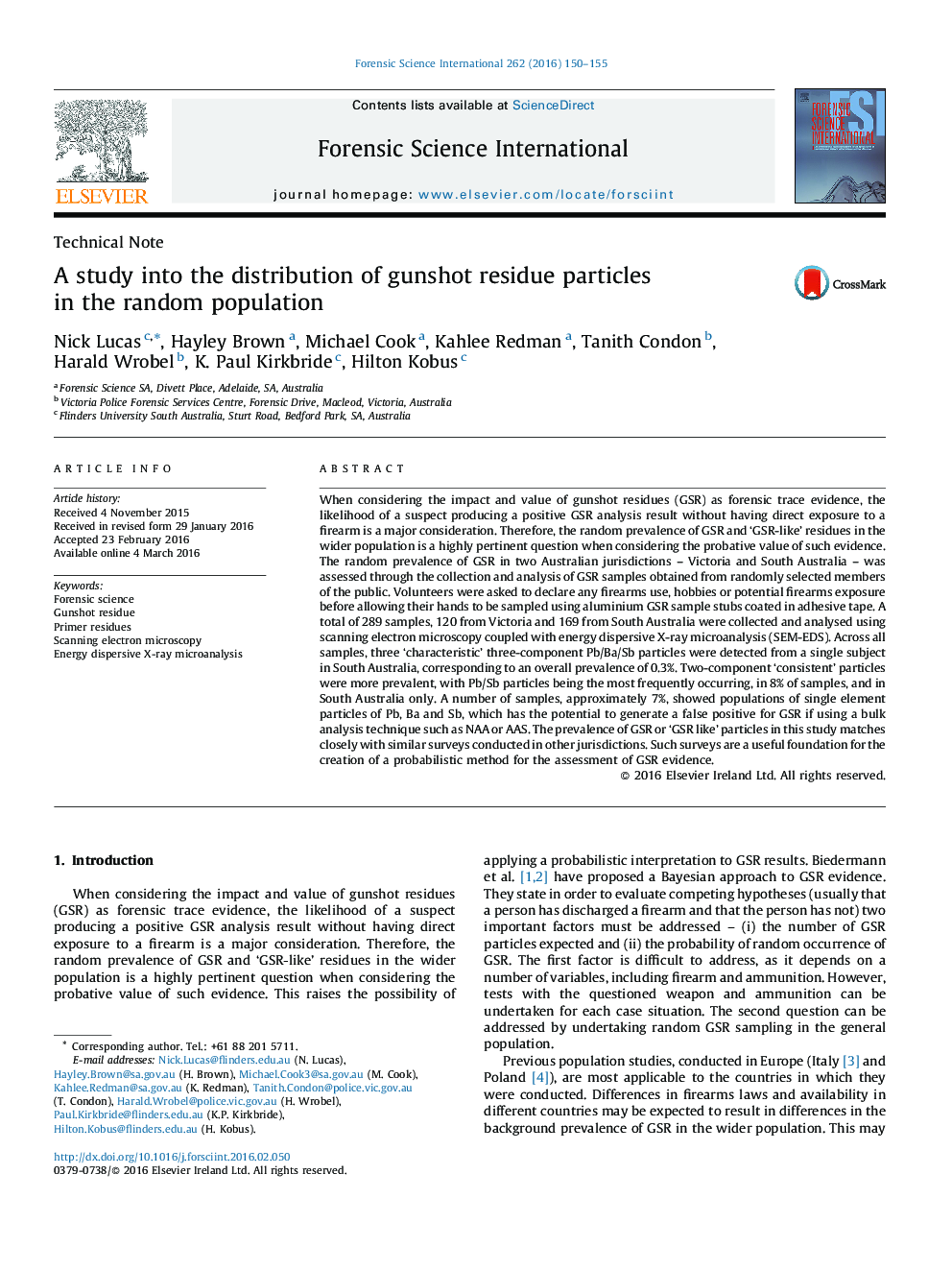 • 289 samples were collected from members of the public and examined for GSR.
• The frequency of three-component GSR-like particles was less than 0.3%.
• No characteristic or indicative GSR was found on any subjects in Victoria.
• Three-component GSR was found on a single participant in South Australia.
• No correlation between firearm hobbies or use and GSR on hands was found.

When considering the impact and value of gunshot residues (GSR) as forensic trace evidence, the likelihood of a suspect producing a positive GSR analysis result without having direct exposure to a firearm is a major consideration. Therefore, the random prevalence of GSR and ‘GSR-like’ residues in the wider population is a highly pertinent question when considering the probative value of such evidence. The random prevalence of GSR in two Australian jurisdictions – Victoria and South Australia – was assessed through the collection and analysis of GSR samples obtained from randomly selected members of the public. Volunteers were asked to declare any firearms use, hobbies or potential firearms exposure before allowing their hands to be sampled using aluminium GSR sample stubs coated in adhesive tape. A total of 289 samples, 120 from Victoria and 169 from South Australia were collected and analysed using scanning electron microscopy coupled with energy dispersive X-ray microanalysis (SEM-EDS). Across all samples, three ‘characteristic’ three-component Pb/Ba/Sb particles were detected from a single subject in South Australia, corresponding to an overall prevalence of 0.3%. Two-component ‘consistent’ particles were more prevalent, with Pb/Sb particles being the most frequently occurring, in 8% of samples, and in South Australia only. A number of samples, approximately 7%, showed populations of single element particles of Pb, Ba and Sb, which has the potential to generate a false positive for GSR if using a bulk analysis technique such as NAA or AAS. The prevalence of GSR or ‘GSR like’ particles in this study matches closely with similar surveys conducted in other jurisdictions. Such surveys are a useful foundation for the creation of a probabilistic method for the assessment of GSR evidence.