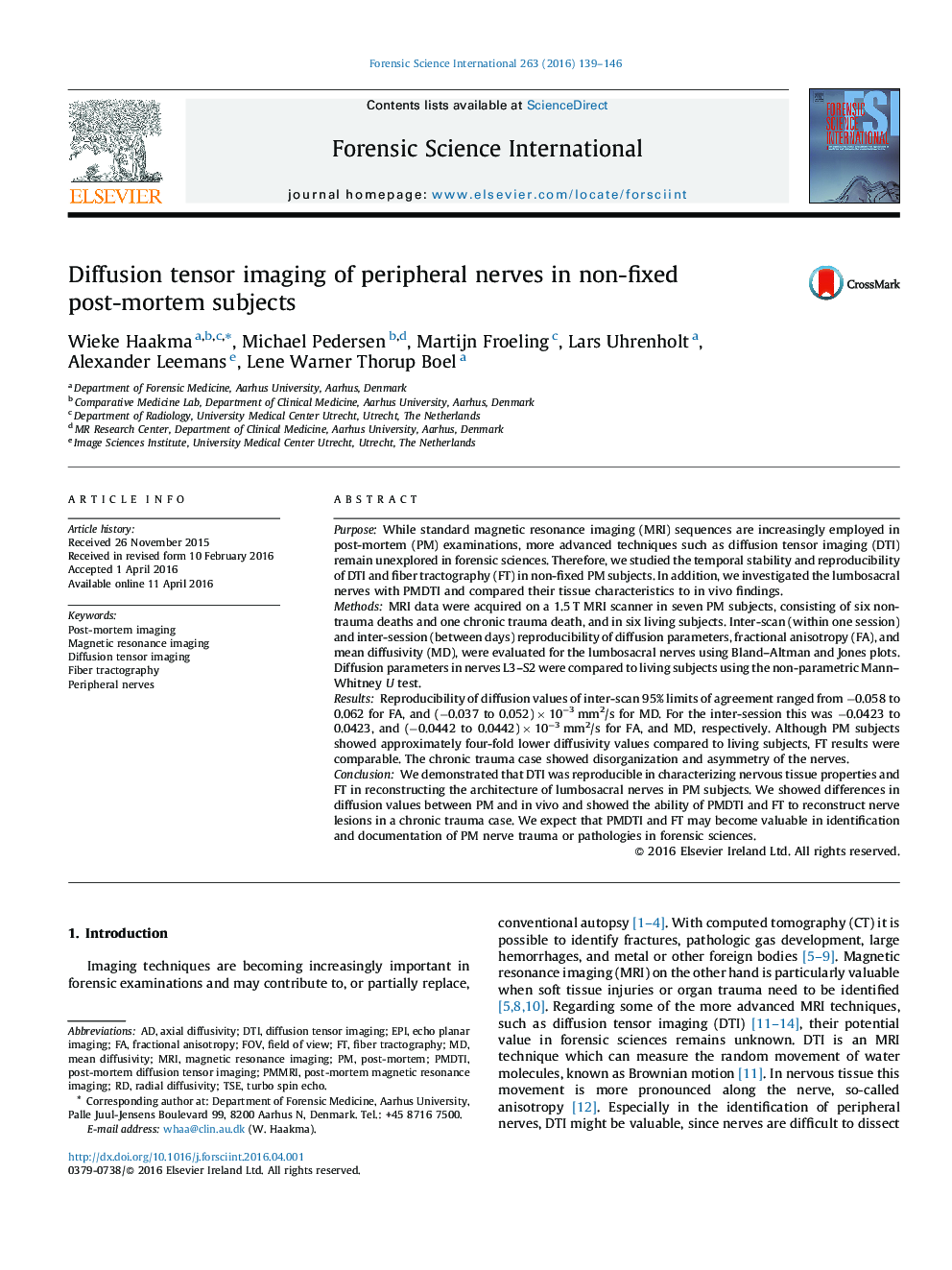 • Nerves are reconstructed using post-mortem (PM) diffusion tensor imaging (DTI).
• PMDTI and fiber tractography (FT) are reproducible within session and over days.
• Architectural configuration of the FT results is not different between PM and in vivo.
• It is possible to identify nerve injuries in one trauma case with chronic lesions of nervous tissue using PMDTI and FT.

PurposeWhile standard magnetic resonance imaging (MRI) sequences are increasingly employed in post-mortem (PM) examinations, more advanced techniques such as diffusion tensor imaging (DTI) remain unexplored in forensic sciences. Therefore, we studied the temporal stability and reproducibility of DTI and fiber tractography (FT) in non-fixed PM subjects. In addition, we investigated the lumbosacral nerves with PMDTI and compared their tissue characteristics to in vivo findings.MethodsMRI data were acquired on a 1.5 T MRI scanner in seven PM subjects, consisting of six non-trauma deaths and one chronic trauma death, and in six living subjects. Inter-scan (within one session) and inter-session (between days) reproducibility of diffusion parameters, fractional anisotropy (FA), and mean diffusivity (MD), were evaluated for the lumbosacral nerves using Bland–Altman and Jones plots. Diffusion parameters in nerves L3–S2 were compared to living subjects using the non-parametric Mann–Whitney U test.ResultsReproducibility of diffusion values of inter-scan 95% limits of agreement ranged from −0.058 to 0.062 for FA, and (−0.037 to 0.052) × 10−3 mm2/s for MD. For the inter-session this was −0.0423 to 0.0423, and (−0.0442 to 0.0442) × 10−3 mm2/s for FA, and MD, respectively. Although PM subjects showed approximately four-fold lower diffusivity values compared to living subjects, FT results were comparable. The chronic trauma case showed disorganization and asymmetry of the nerves.ConclusionWe demonstrated that DTI was reproducible in characterizing nervous tissue properties and FT in reconstructing the architecture of lumbosacral nerves in PM subjects. We showed differences in diffusion values between PM and in vivo and showed the ability of PMDTI and FT to reconstruct nerve lesions in a chronic trauma case. We expect that PMDTI and FT may become valuable in identification and documentation of PM nerve trauma or pathologies in forensic sciences.