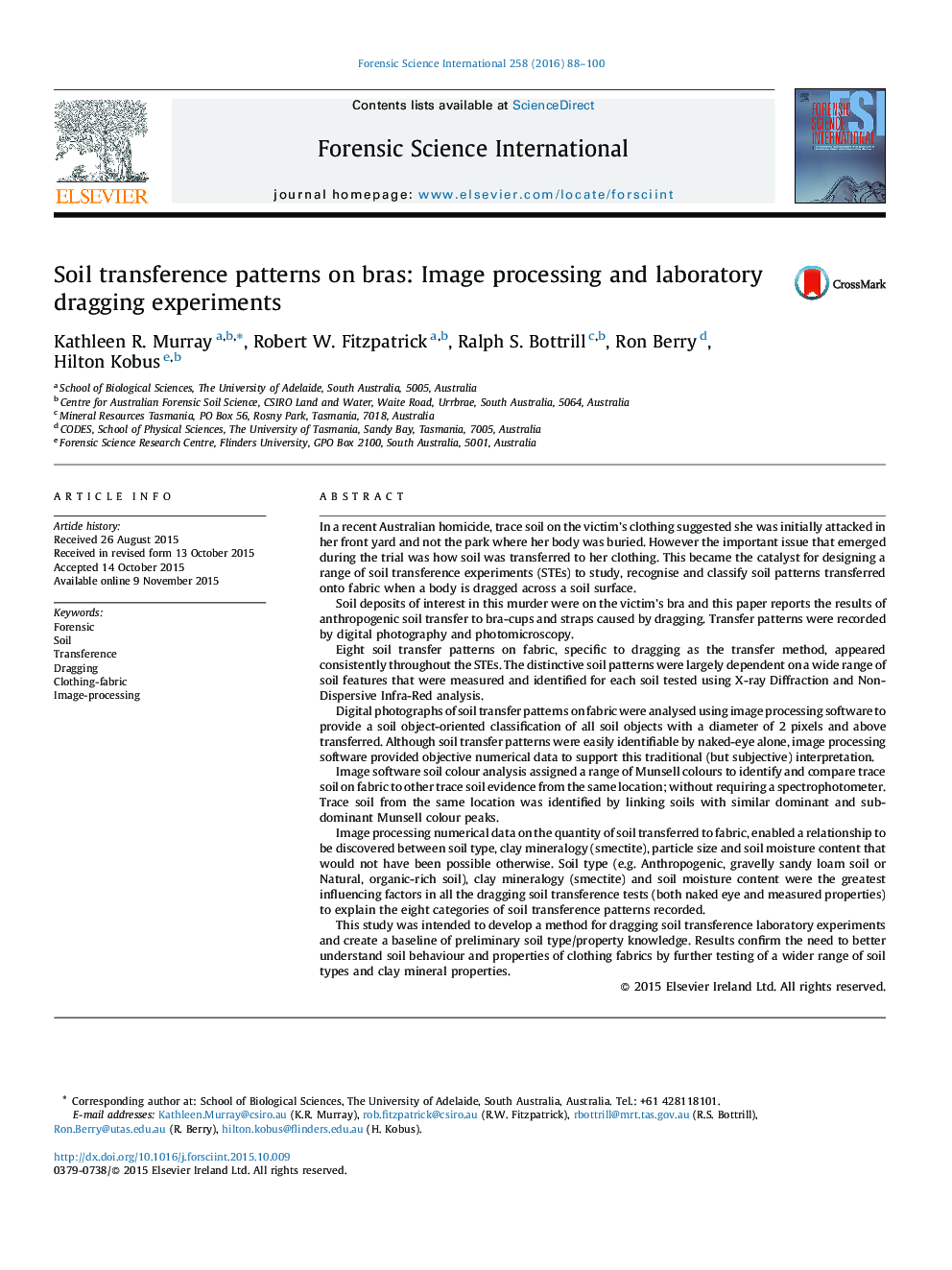 In a recent Australian homicide, trace soil on the victim's clothing suggested she was initially attacked in her front yard and not the park where her body was buried. However the important issue that emerged during the trial was how soil was transferred to her clothing. This became the catalyst for designing a range of soil transference experiments (STEs) to study, recognise and classify soil patterns transferred onto fabric when a body is dragged across a soil surface.Soil deposits of interest in this murder were on the victim's bra and this paper reports the results of anthropogenic soil transfer to bra-cups and straps caused by dragging. Transfer patterns were recorded by digital photography and photomicroscopy.Eight soil transfer patterns on fabric, specific to dragging as the transfer method, appeared consistently throughout the STEs. The distinctive soil patterns were largely dependent on a wide range of soil features that were measured and identified for each soil tested using X-ray Diffraction and Non-Dispersive Infra-Red analysis.Digital photographs of soil transfer patterns on fabric were analysed using image processing software to provide a soil object-oriented classification of all soil objects with a diameter of 2 pixels and above transferred. Although soil transfer patterns were easily identifiable by naked-eye alone, image processing software provided objective numerical data to support this traditional (but subjective) interpretation.Image software soil colour analysis assigned a range of Munsell colours to identify and compare trace soil on fabric to other trace soil evidence from the same location; without requiring a spectrophotometer. Trace soil from the same location was identified by linking soils with similar dominant and sub-dominant Munsell colour peaks.Image processing numerical data on the quantity of soil transferred to fabric, enabled a relationship to be discovered between soil type, clay mineralogy (smectite), particle size and soil moisture content that would not have been possible otherwise. Soil type (e.g. Anthropogenic, gravelly sandy loam soil or Natural, organic-rich soil), clay mineralogy (smectite) and soil moisture content were the greatest influencing factors in all the dragging soil transference tests (both naked eye and measured properties) to explain the eight categories of soil transference patterns recorded.This study was intended to develop a method for dragging soil transference laboratory experiments and create a baseline of preliminary soil type/property knowledge. Results confirm the need to better understand soil behaviour and properties of clothing fabrics by further testing of a wider range of soil types and clay mineral properties.