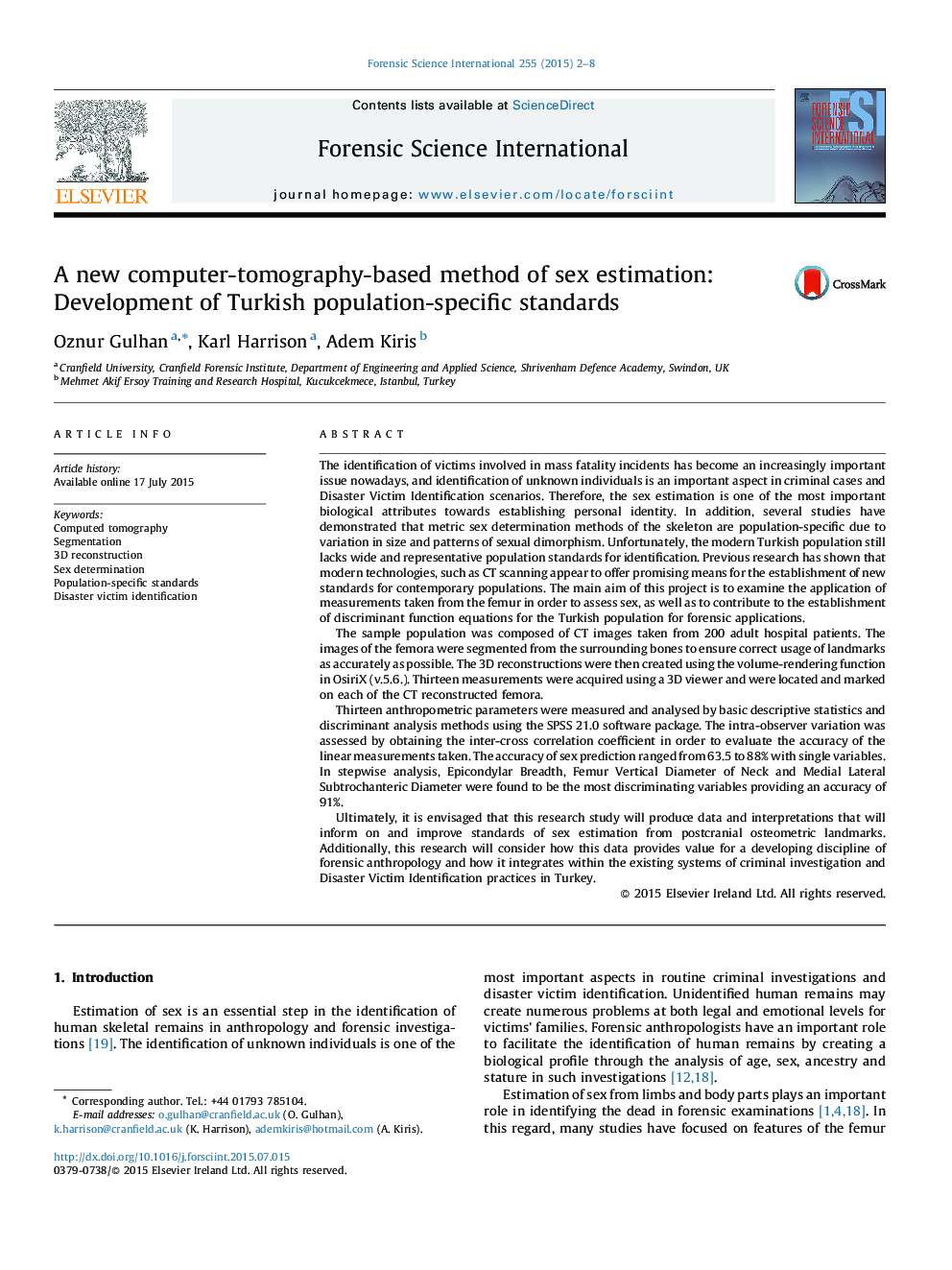 The identification of victims involved in mass fatality incidents has become an increasingly important issue nowadays, and identification of unknown individuals is an important aspect in criminal cases and Disaster Victim Identification scenarios. Therefore, the sex estimation is one of the most important biological attributes towards establishing personal identity. In addition, several studies have demonstrated that metric sex determination methods of the skeleton are population-specific due to variation in size and patterns of sexual dimorphism. Unfortunately, the modern Turkish population still lacks wide and representative population standards for identification. Previous research has shown that modern technologies, such as CT scanning appear to offer promising means for the establishment of new standards for contemporary populations. The main aim of this project is to examine the application of measurements taken from the femur in order to assess sex, as well as to contribute to the establishment of discriminant function equations for the Turkish population for forensic applications.The sample population was composed of CT images taken from 200 adult hospital patients. The images of the femora were segmented from the surrounding bones to ensure correct usage of landmarks as accurately as possible. The 3D reconstructions were then created using the volume-rendering function in OsiriX (v.5.6.). Thirteen measurements were acquired using a 3D viewer and were located and marked on each of the CT reconstructed femora.Thirteen anthropometric parameters were measured and analysed by basic descriptive statistics and discriminant analysis methods using the SPSS 21.0 software package. The intra-observer variation was assessed by obtaining the inter-cross correlation coefficient in order to evaluate the accuracy of the linear measurements taken. The accuracy of sex prediction ranged from 63.5 to 88% with single variables. In stepwise analysis, Epicondylar Breadth, Femur Vertical Diameter of Neck and Medial Lateral Subtrochanteric Diameter were found to be the most discriminating variables providing an accuracy of 91%.Ultimately, it is envisaged that this research study will produce data and interpretations that will inform on and improve standards of sex estimation from postcranial osteometric landmarks. Additionally, this research will consider how this data provides value for a developing discipline of forensic anthropology and how it integrates within the existing systems of criminal investigation and Disaster Victim Identification practices in Turkey.