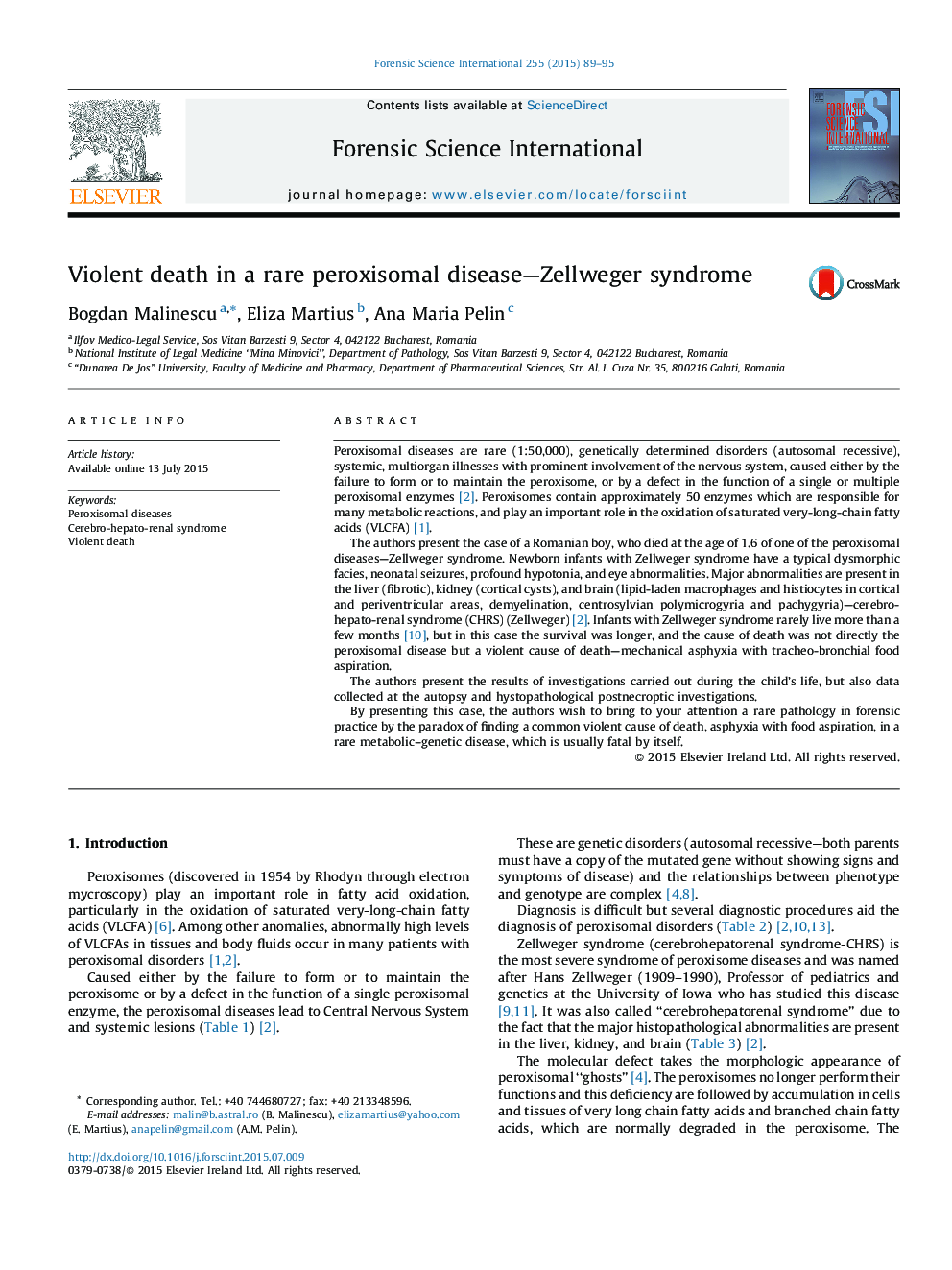 • Zellweger syndrome is a rare peroxisomal, genetically determined, multiorgan disease.
• Major histopathological abnormalities are present in the liver, kidney and brain.
• The most sensitive indicator is a highly pathological C26/C22 ratio.
• Death is usually due to progressive apnea or respiratory failure caused by infections.
• In our case tracheo-bronchial food aspiration was the cause of death.

Peroxisomal diseases are rare (1:50,000), genetically determined disorders (autosomal recessive), systemic, multiorgan illnesses with prominent involvement of the nervous system, caused either by the failure to form or to maintain the peroxisome, or by a defect in the function of a single or multiple peroxisomal enzymes [2]. Peroxisomes contain approximately 50 enzymes which are responsible for many metabolic reactions, and play an important role in the oxidation of saturated very-long-chain fatty acids (VLCFA) [1].The authors present the case of a Romanian boy, who died at the age of 1.6 of one of the peroxisomal diseases—Zellweger syndrome. Newborn infants with Zellweger syndrome have a typical dysmorphic facies, neonatal seizures, profound hypotonia, and eye abnormalities. Major abnormalities are present in the liver (fibrotic), kidney (cortical cysts), and brain (lipid-laden macrophages and histiocytes in cortical and periventricular areas, demyelination, centrosylvian polymicrogyria and pachygyria)—cerebro-hepato-renal syndrome (CHRS) (Zellweger) [2]. Infants with Zellweger syndrome rarely live more than a few months [10], but in this case the survival was longer, and the cause of death was not directly the peroxisomal disease but a violent cause of death—mechanical asphyxia with tracheo-bronchial food aspiration.The authors present the results of investigations carried out during the child's life, but also data collected at the autopsy and hystopathological postnecroptic investigations.By presenting this case, the authors wish to bring to your attention a rare pathology in forensic practice by the paradox of finding a common violent cause of death, asphyxia with food aspiration, in a rare metabolic–genetic disease, which is usually fatal by itself.