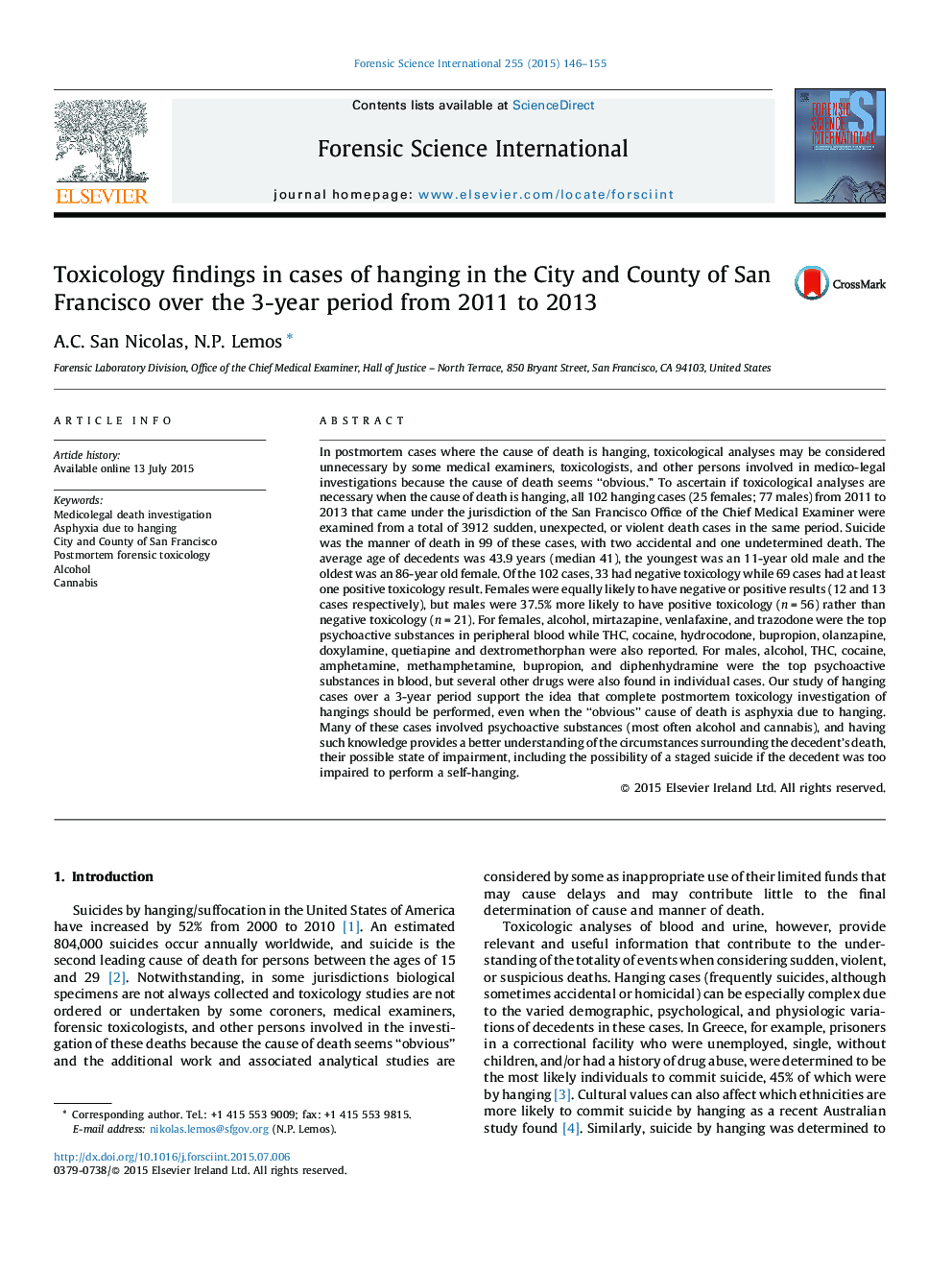 In postmortem cases where the cause of death is hanging, toxicological analyses may be considered unnecessary by some medical examiners, toxicologists, and other persons involved in medico-legal investigations because the cause of death seems “obvious.” To ascertain if toxicological analyses are necessary when the cause of death is hanging, all 102 hanging cases (25 females; 77 males) from 2011 to 2013 that came under the jurisdiction of the San Francisco Office of the Chief Medical Examiner were examined from a total of 3912 sudden, unexpected, or violent death cases in the same period. Suicide was the manner of death in 99 of these cases, with two accidental and one undetermined death. The average age of decedents was 43.9 years (median 41), the youngest was an 11-year old male and the oldest was an 86-year old female. Of the 102 cases, 33 had negative toxicology while 69 cases had at least one positive toxicology result. Females were equally likely to have negative or positive results (12 and 13 cases respectively), but males were 37.5% more likely to have positive toxicology (n = 56) rather than negative toxicology (n = 21). For females, alcohol, mirtazapine, venlafaxine, and trazodone were the top psychoactive substances in peripheral blood while THC, cocaine, hydrocodone, bupropion, olanzapine, doxylamine, quetiapine and dextromethorphan were also reported. For males, alcohol, THC, cocaine, amphetamine, methamphetamine, bupropion, and diphenhydramine were the top psychoactive substances in blood, but several other drugs were also found in individual cases. Our study of hanging cases over a 3-year period support the idea that complete postmortem toxicology investigation of hangings should be performed, even when the “obvious” cause of death is asphyxia due to hanging. Many of these cases involved psychoactive substances (most often alcohol and cannabis), and having such knowledge provides a better understanding of the circumstances surrounding the decedent's death, their possible state of impairment, including the possibility of a staged suicide if the decedent was too impaired to perform a self-hanging.