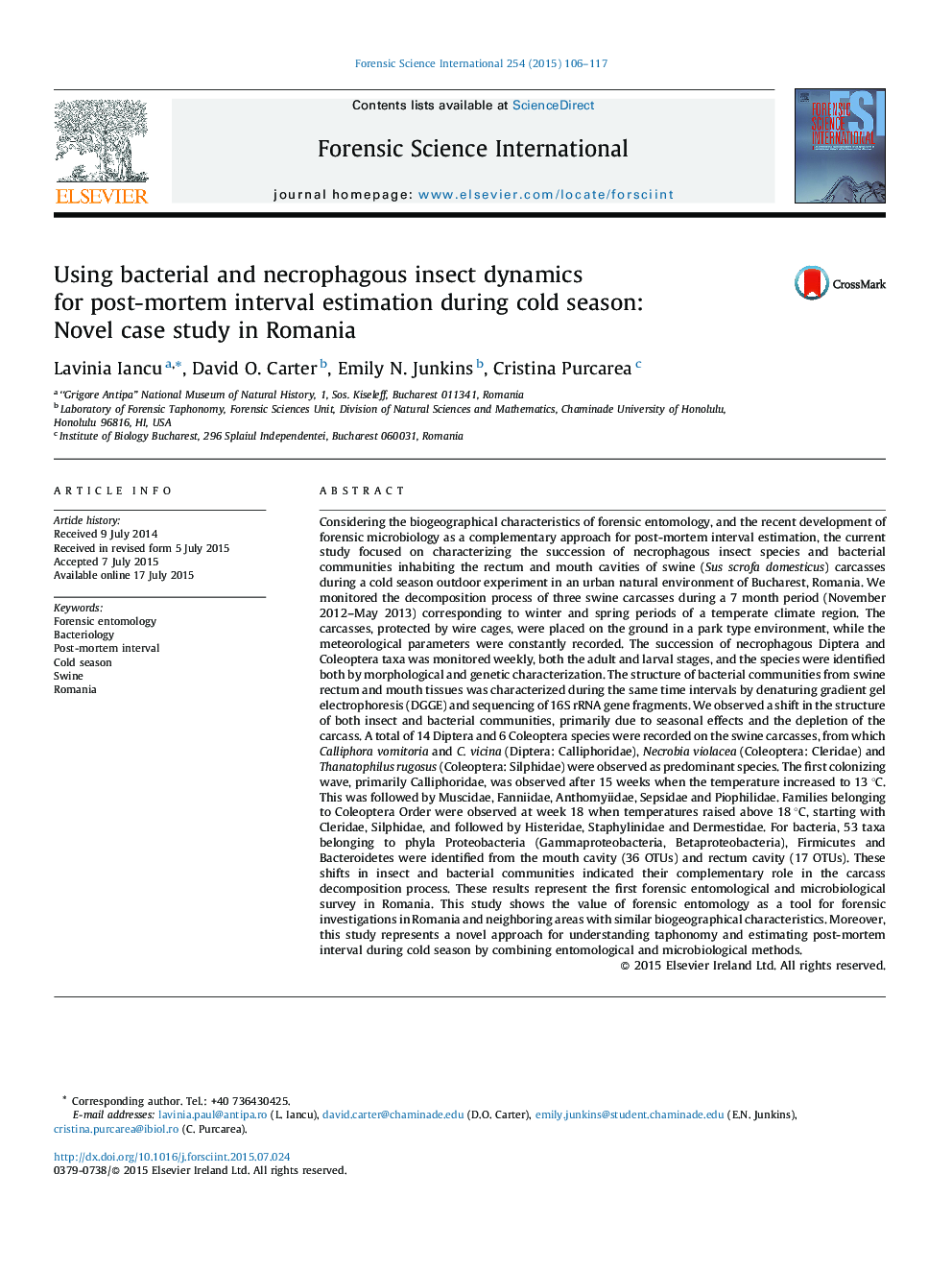 Considering the biogeographical characteristics of forensic entomology, and the recent development of forensic microbiology as a complementary approach for post-mortem interval estimation, the current study focused on characterizing the succession of necrophagous insect species and bacterial communities inhabiting the rectum and mouth cavities of swine (Sus scrofa domesticus) carcasses during a cold season outdoor experiment in an urban natural environment of Bucharest, Romania. We monitored the decomposition process of three swine carcasses during a 7 month period (November 2012–May 2013) corresponding to winter and spring periods of a temperate climate region. The carcasses, protected by wire cages, were placed on the ground in a park type environment, while the meteorological parameters were constantly recorded. The succession of necrophagous Diptera and Coleoptera taxa was monitored weekly, both the adult and larval stages, and the species were identified both by morphological and genetic characterization. The structure of bacterial communities from swine rectum and mouth tissues was characterized during the same time intervals by denaturing gradient gel electrophoresis (DGGE) and sequencing of 16S rRNA gene fragments. We observed a shift in the structure of both insect and bacterial communities, primarily due to seasonal effects and the depletion of the carcass. A total of 14 Diptera and 6 Coleoptera species were recorded on the swine carcasses, from which Calliphora vomitoria and C. vicina (Diptera: Calliphoridae), Necrobia violacea (Coleoptera: Cleridae) and Thanatophilus rugosus (Coleoptera: Silphidae) were observed as predominant species. The first colonizing wave, primarily Calliphoridae, was observed after 15 weeks when the temperature increased to 13 °C. This was followed by Muscidae, Fanniidae, Anthomyiidae, Sepsidae and Piophilidae. Families belonging to Coleoptera Order were observed at week 18 when temperatures raised above 18 °C, starting with Cleridae, Silphidae, and followed by Histeridae, Staphylinidae and Dermestidae. For bacteria, 53 taxa belonging to phyla Proteobacteria (Gammaproteobacteria, Betaproteobacteria), Firmicutes and Bacteroidetes were identified from the mouth cavity (36 OTUs) and rectum cavity (17 OTUs). These shifts in insect and bacterial communities indicated their complementary role in the carcass decomposition process. These results represent the first forensic entomological and microbiological survey in Romania. This study shows the value of forensic entomology as a tool for forensic investigations in Romania and neighboring areas with similar biogeographical characteristics. Moreover, this study represents a novel approach for understanding taphonomy and estimating post-mortem interval during cold season by combining entomological and microbiological methods.