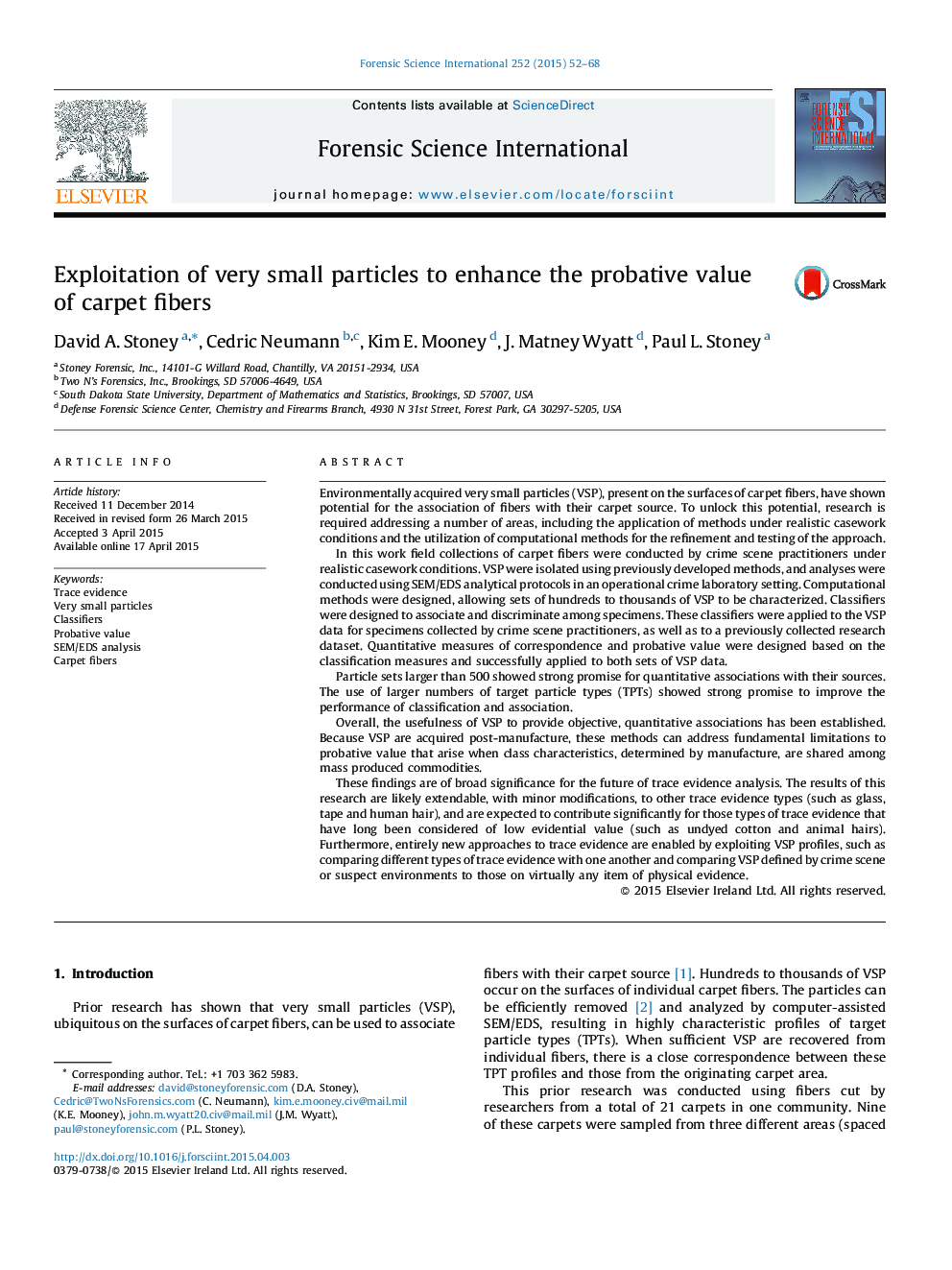 • It is practical to collect and analyze very small particles (VSP) on carpet fibers.
• Computational methods allow complex VSP profiles to be characterized.
• VSP on carpet fibers, acquired post-manufacture, can enhance class associations.
• VSP are useful to provide objective, quantitative associations.
• The findings are of broad significance for the future of trace evidence analysis.

Environmentally acquired very small particles (VSP), present on the surfaces of carpet fibers, have shown potential for the association of fibers with their carpet source. To unlock this potential, research is required addressing a number of areas, including the application of methods under realistic casework conditions and the utilization of computational methods for the refinement and testing of the approach.In this work field collections of carpet fibers were conducted by crime scene practitioners under realistic casework conditions. VSP were isolated using previously developed methods, and analyses were conducted using SEM/EDS analytical protocols in an operational crime laboratory setting. Computational methods were designed, allowing sets of hundreds to thousands of VSP to be characterized. Classifiers were designed to associate and discriminate among specimens. These classifiers were applied to the VSP data for specimens collected by crime scene practitioners, as well as to a previously collected research dataset. Quantitative measures of correspondence and probative value were designed based on the classification measures and successfully applied to both sets of VSP data.Particle sets larger than 500 showed strong promise for quantitative associations with their sources. The use of larger numbers of target particle types (TPTs) showed strong promise to improve the performance of classification and association.Overall, the usefulness of VSP to provide objective, quantitative associations has been established. Because VSP are acquired post-manufacture, these methods can address fundamental limitations to probative value that arise when class characteristics, determined by manufacture, are shared among mass produced commodities.These findings are of broad significance for the future of trace evidence analysis. The results of this research are likely extendable, with minor modifications, to other trace evidence types (such as glass, tape and human hair), and are expected to contribute significantly for those types of trace evidence that have long been considered of low evidential value (such as undyed cotton and animal hairs). Furthermore, entirely new approaches to trace evidence are enabled by exploiting VSP profiles, such as comparing different types of trace evidence with one another and comparing VSP defined by crime scene or suspect environments to those on virtually any item of physical evidence.