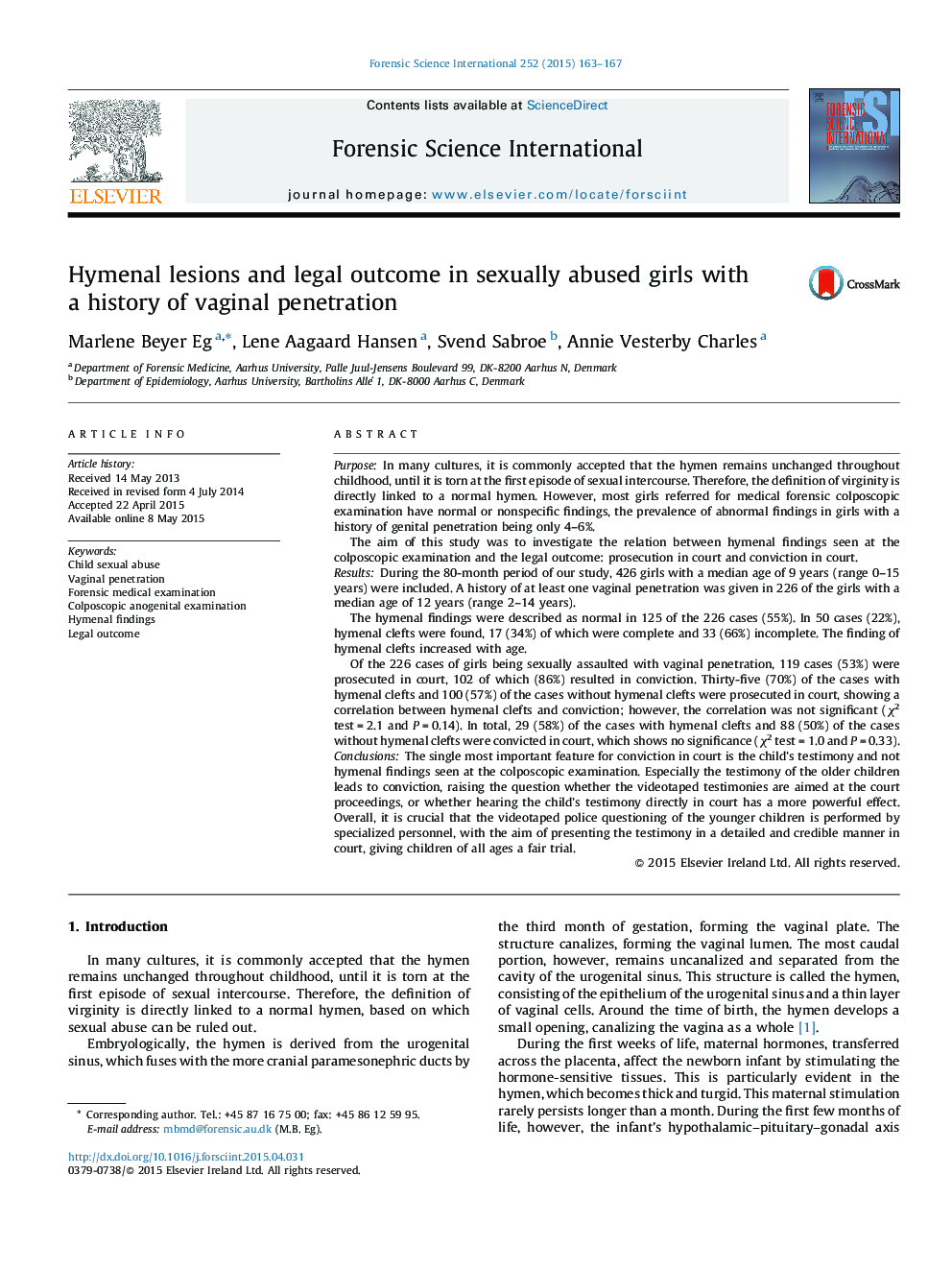 • A history of at least one vaginal penetration was given in 226 girls.
• In 50 cases (22%), hymenal clefts were found, 17 (34%) of which were complete.
• Of the cases with complete hymenal clefts, 63% were prosecuted and 50% convicted.
• The only significant parameter found in this study was age in relation to conviction.
• The single most important feature for conviction in court is the child's testimony.

PurposeIn many cultures, it is commonly accepted that the hymen remains unchanged throughout childhood, until it is torn at the first episode of sexual intercourse. Therefore, the definition of virginity is directly linked to a normal hymen. However, most girls referred for medical forensic colposcopic examination have normal or nonspecific findings, the prevalence of abnormal findings in girls with a history of genital penetration being only 4–6%.The aim of this study was to investigate the relation between hymenal findings seen at the colposcopic examination and the legal outcome: prosecution in court and conviction in court.ResultsDuring the 80-month period of our study, 426 girls with a median age of 9 years (range 0–15 years) were included. A history of at least one vaginal penetration was given in 226 of the girls with a median age of 12 years (range 2–14 years).The hymenal findings were described as normal in 125 of the 226 cases (55%). In 50 cases (22%), hymenal clefts were found, 17 (34%) of which were complete and 33 (66%) incomplete. The finding of hymenal clefts increased with age.Of the 226 cases of girls being sexually assaulted with vaginal penetration, 119 cases (53%) were prosecuted in court, 102 of which (86%) resulted in conviction. Thirty-five (70%) of the cases with hymenal clefts and 100 (57%) of the cases without hymenal clefts were prosecuted in court, showing a correlation between hymenal clefts and conviction; however, the correlation was not significant (χ2 test = 2.1 and P = 0.14). In total, 29 (58%) of the cases with hymenal clefts and 88 (50%) of the cases without hymenal clefts were convicted in court, which shows no significance (χ2 test = 1.0 and P = 0.33).ConclusionsThe single most important feature for conviction in court is the child's testimony and not hymenal findings seen at the colposcopic examination. Especially the testimony of the older children leads to conviction, raising the question whether the videotaped testimonies are aimed at the court proceedings, or whether hearing the child's testimony directly in court has a more powerful effect. Overall, it is crucial that the videotaped police questioning of the younger children is performed by specialized personnel, with the aim of presenting the testimony in a detailed and credible manner in court, giving children of all ages a fair trial.