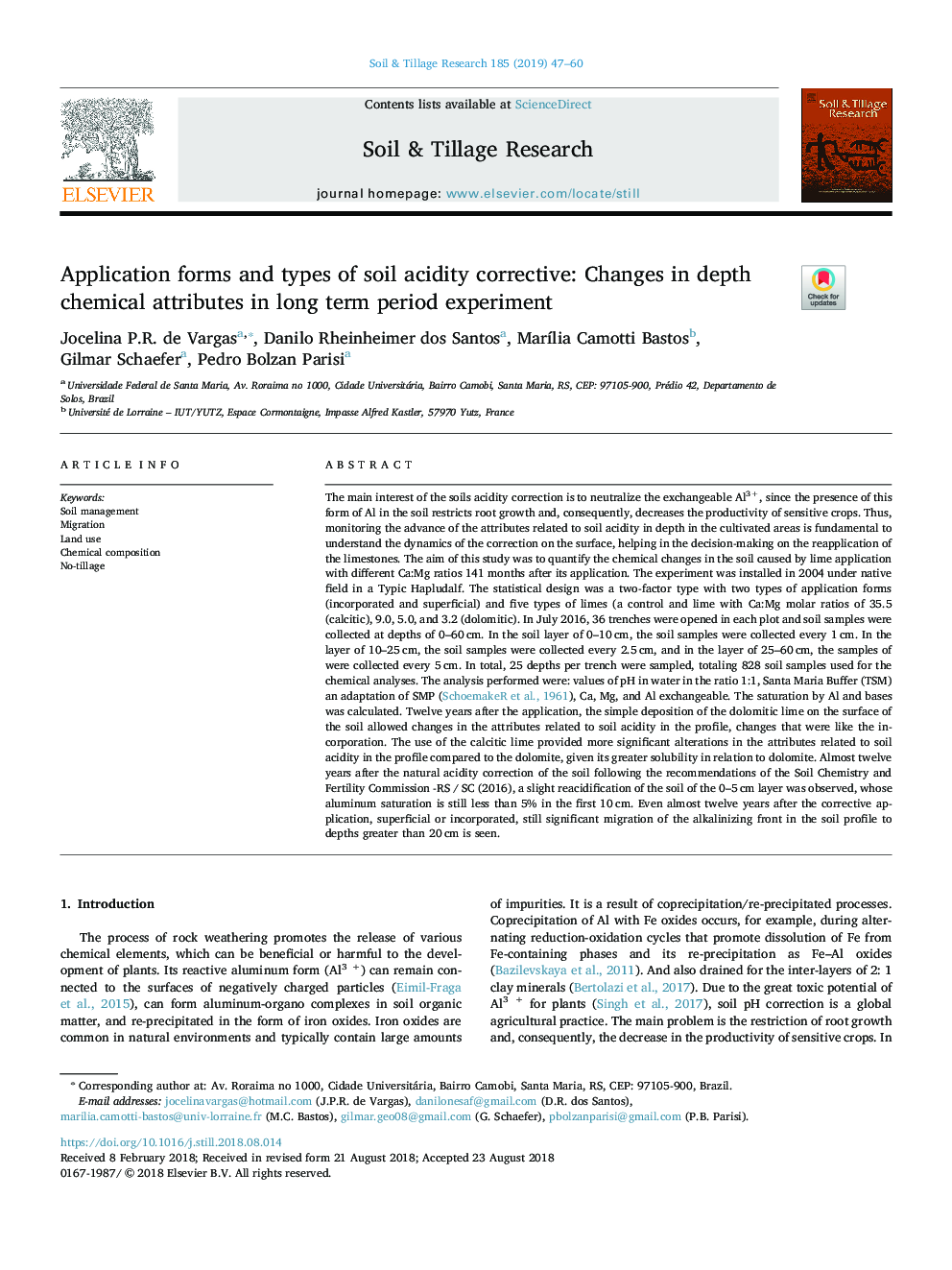 چکیده انگلیسی
The main interest of the soils acidity correction is to neutralize the exchangeable Al3+, since the presence of this form of Al in the soil restricts root growth and, consequently, decreases the productivity of sensitive crops. Thus, monitoring the advance of the attributes related to soil acidity in depth in the cultivated areas is fundamental to understand the dynamics of the correction on the surface, helping in the decision-making on the reapplication of the limestones. The aim of this study was to quantify the chemical changes in the soil caused by lime application with different Ca:Mg ratios 141 months after its application. The experiment was installed in 2004 under native field in a Typic Hapludalf. The statistical design was a two-factor type with two types of application forms (incorporated and superficial) and five types of limes (a control and lime with Ca:Mg molar ratios of 35.5 (calcitic), 9.0, 5.0, and 3.2 (dolomitic). In July 2016, 36 trenches were opened in each plot and soil samples were collected at depths of 0-60âcm. In the soil layer of 0-10âcm, the soil samples were collected every 1âcm. In the layer of 10-25âcm, the soil samples were collected every 2.5âcm, and in the layer of 25-60âcm, the samples of were collected every 5âcm. In total, 25 depths per trench were sampled, totaling 828 soil samples used for the chemical analyses. The analysis performed were: values of pH in water in the ratio 1:1, Santa Maria Buffer (TSM) an adaptation of SMP (SchoemakeR et al., 1961), Ca, Mg, and Al exchangeable. The saturation by Al and bases was calculated. Twelve years after the application, the simple deposition of the dolomitic lime on the surface of the soil allowed changes in the attributes related to soil acidity in the profile, changes that were like the incorporation. The use of the calcitic lime provided more significant alterations in the attributes related to soil acidity in the profile compared to the dolomite, given its greater solubility in relation to dolomite. Almost twelve years after the natural acidity correction of the soil following the recommendations of the Soil Chemistry and Fertility Commission -RS / SC (2016), a slight reacidification of the soil of the 0-5âcm layer was observed, whose aluminum saturation is still less than 5% in the first 10âcm. Even almost twelve years after the corrective application, superficial or incorporated, still significant migration of the alkalinizing front in the soil profile to depths greater than 20âcm is seen.
ناشر
Database: Elsevier - ScienceDirect (ساینس دایرکت)
Journal: Soil and Tillage Research - Volume 185, January 2019, Pages 47-60
نویسندگان
Jocelina P.R. de Vargas, Danilo Rheinheimer dos Santos, MarÃ­lia Camotti Bastos, Gilmar Schaefer, Pedro Bolzan Parisi,
دانلود مقاله + سفارش ترجمه
دانلود مقاله ISI انگلیسی
رایگان برای ایرانیان
سفارش ترجمه تخصصی
با تضمین قیمت و کیفیت
منتشر شده در