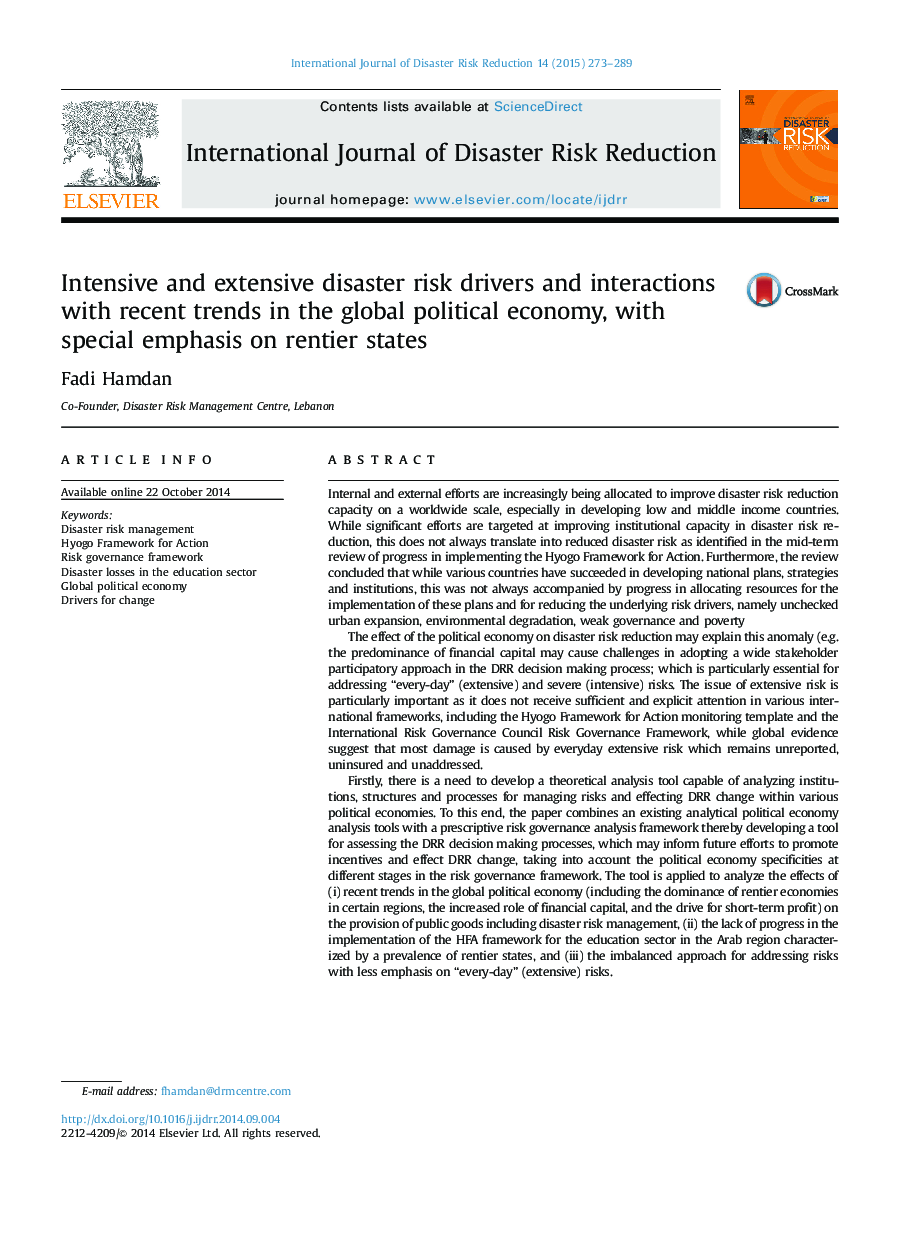 Internal and external efforts are increasingly being allocated to improve disaster risk reduction capacity on a worldwide scale, especially in developing low and middle income countries. While significant efforts are targeted at improving institutional capacity in disaster risk reduction, this does not always translate into reduced disaster risk as identified in the mid-term review of progress in implementing the Hyogo Framework for Action. Furthermore, the review concluded that while various countries have succeeded in developing national plans, strategies and institutions, this was not always accompanied by progress in allocating resources for the implementation of these plans and for reducing the underlying risk drivers, namely unchecked urban expansion, environmental degradation, weak governance and povertyThe effect of the political economy on disaster risk reduction may explain this anomaly (e.g. the predominance of financial capital may cause challenges in adopting a wide stakeholder participatory approach in the DRR decision making process; which is particularly essential for addressing “every-day” (extensive) and severe (intensive) risks. The issue of extensive risk is particularly important as it does not receive sufficient and explicit attention in various international frameworks, including the Hyogo Framework for Action monitoring template and the International Risk Governance Council Risk Governance Framework, while global evidence suggest that most damage is caused by everyday extensive risk which remains unreported, uninsured and unaddressed.Firstly, there is a need to develop a theoretical analysis tool capable of analyzing institutions, structures and processes for managing risks and effecting DRR change within various political economies. To this end, the paper combines an existing analytical political economy analysis tools with a prescriptive risk governance analysis framework thereby developing a tool for assessing the DRR decision making processes, which may inform future efforts to promote incentives and effect DRR change, taking into account the political economy specificities at different stages in the risk governance framework. The tool is applied to analyze the effects of (i) recent trends in the global political economy (including the dominance of rentier economies in certain regions, the increased role of financial capital, and the drive for short-term profit) on the provision of public goods including disaster risk management, (ii) the lack of progress in the implementation of the HFA framework for the education sector in the Arab region characterized by a prevalence of rentier states, and (iii) the imbalanced approach for addressing risks with less emphasis on “every-day” (extensive) risks.The above succinct applications demonstrate the effectiveness of the tool in identifying gaps and difficulties in the decision making process related to DRR. As such it allows for the development and assessment of various incentives aimed at addressing the identified gaps.