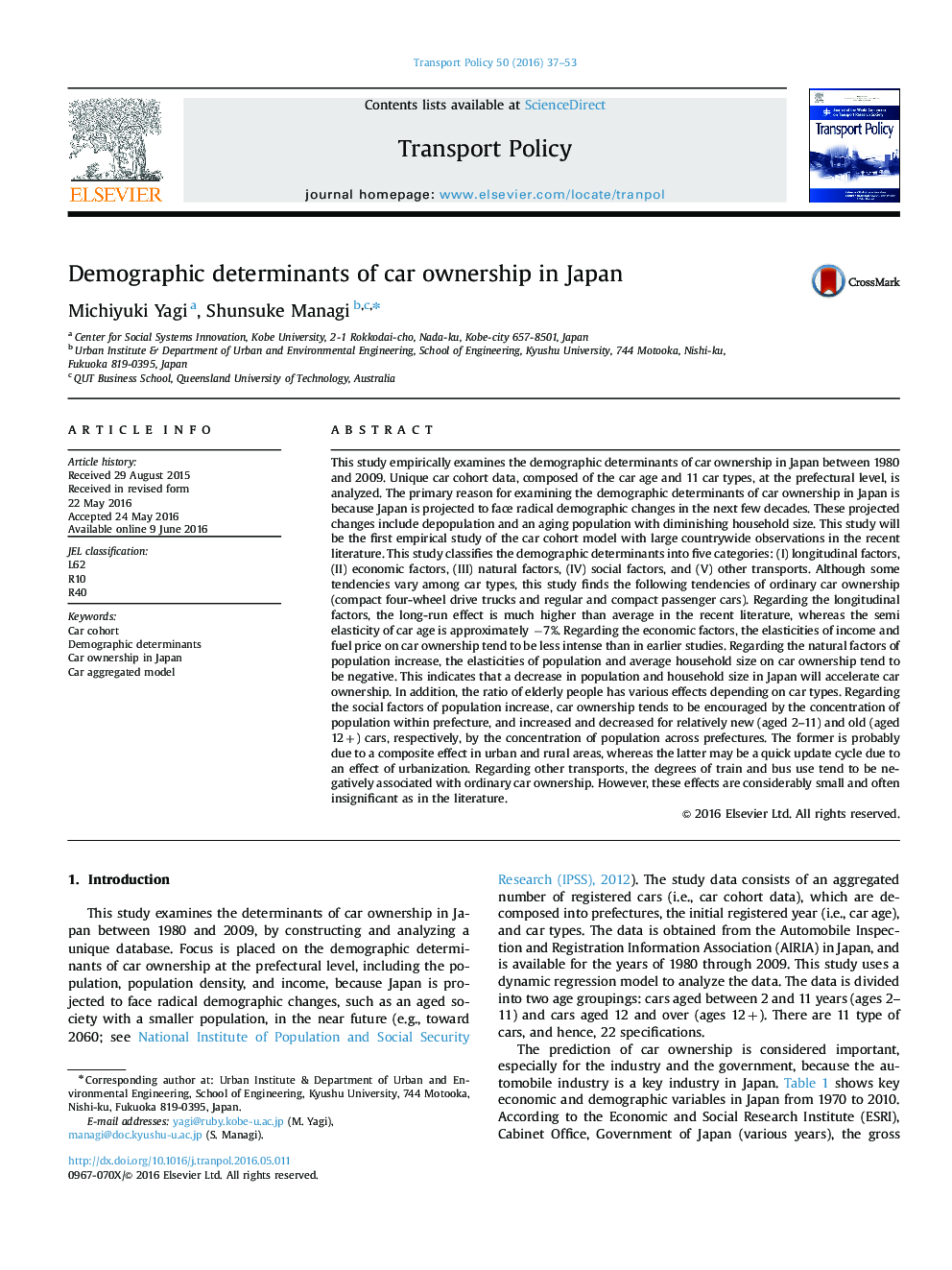 • We examine the demographic determinants of car ownership in Japan from 1980 to 2009.
• Unique cohort data, composed of car age and 11 car types, at prefectural level.
• Effects of longitudinal and economic factors are intense and weak, respectively.
• A smaller population and household size (natural factors) encourages car ownership.
• Effects of social factors and other transports are complex and weak, respectively.

This study empirically examines the demographic determinants of car ownership in Japan between 1980 and 2009. Unique car cohort data, composed of the car age and 11 car types, at the prefectural level, is analyzed. The primary reason for examining the demographic determinants of car ownership in Japan is because Japan is projected to face radical demographic changes in the next few decades. These projected changes include depopulation and an aging population with diminishing household size. This study will be the first empirical study of the car cohort model with large countrywide observations in the recent literature. This study classifies the demographic determinants into five categories: (I) longitudinal factors, (II) economic factors, (III) natural factors, (IV) social factors, and (V) other transports. Although some tendencies vary among car types, this study finds the following tendencies of ordinary car ownership (compact four-wheel drive trucks and regular and compact passenger cars). Regarding the longitudinal factors, the long-run effect is much higher than average in the recent literature, whereas the semi elasticity of car age is approximately −7%. Regarding the economic factors, the elasticities of income and fuel price on car ownership tend to be less intense than in earlier studies. Regarding the natural factors of population increase, the elasticities of population and average household size on car ownership tend to be negative. This indicates that a decrease in population and household size in Japan will accelerate car ownership. In addition, the ratio of elderly people has various effects depending on car types. Regarding the social factors of population increase, car ownership tends to be encouraged by the concentration of population within prefecture, and increased and decreased for relatively new (aged 2–11) and old (aged 12+) cars, respectively, by the concentration of population across prefectures. The former is probably due to a composite effect in urban and rural areas, whereas the latter may be a quick update cycle due to an effect of urbanization. Regarding other transports, the degrees of train and bus use tend to be negatively associated with ordinary car ownership. However, these effects are considerably small and often insignificant as in the literature.