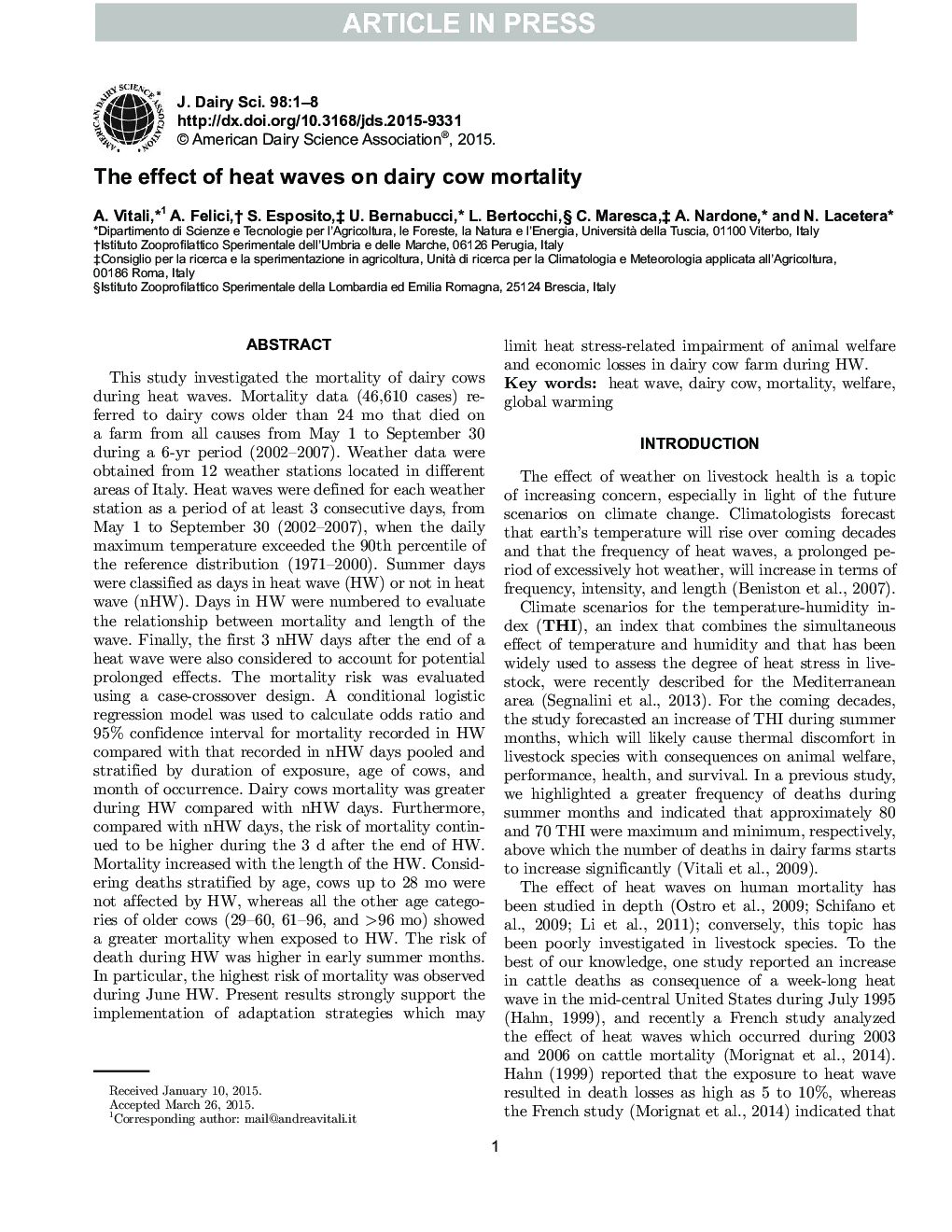 چکیده انگلیسی
This study investigated the mortality of dairy cows during heat waves. Mortality data (46,610 cases) referred to dairy cows older than 24Â mo that died on a farm from all causes from May 1 to September 30 during a 6-yr period (2002-2007). Weather data were obtained from 12 weather stations located in different areas of Italy. Heat waves were defined for each weather station as a period of at least 3 consecutive days, from May 1 to September 30 (2002-2007), when the daily maximum temperature exceeded the 90th percentile of the reference distribution (1971-2000). Summer days were classified as days in heat wave (HW) or not in heat wave (nHW). Days in HW were numbered to evaluate the relationship between mortality and length of the wave. Finally, the first 3 nHW days after the end of a heat wave were also considered to account for potential prolonged effects. The mortality risk was evaluated using a case-crossover design. A conditional logistic regression model was used to calculate odds ratio and 95% confidence interval for mortality recorded in HW compared with that recorded in nHW days pooled and stratified by duration of exposure, age of cows, and month of occurrence. Dairy cows mortality was greater during HW compared with nHW days. Furthermore, compared with nHW days, the risk of mortality continued to be higher during the 3 d after the end of HW. Mortality increased with the length of the HW. Considering deaths stratified by age, cows up to 28Â mo were not affected by HW, whereas all the other age categories of older cows (29-60, 61-96, and >96Â mo) showed a greater mortality when exposed to HW. The risk of death during HW was higher in early summer months. In particular, the highest risk of mortality was observed during June HW. Present results strongly support the implementation of adaptation strategies which may limit heat stress-related impairment of animal welfare and economic losses in dairy cow farm during HW.
ناشر
Database: Elsevier - ScienceDirect (ساینس دایرکت)
Journal: Journal of Dairy Science - Volume 98, Issue 7, July 2015, Pages 4572-4579
نویسندگان
A. Vitali, A. Felici, S. Esposito, U. Bernabucci, L. Bertocchi, C. Maresca, A. Nardone, N. Lacetera,
دانلود مقاله + سفارش ترجمه
دانلود مقاله ISI انگلیسی
رایگان برای ایرانیان
سفارش ترجمه تخصصی
با تضمین قیمت و کیفیت
منتشر شده در