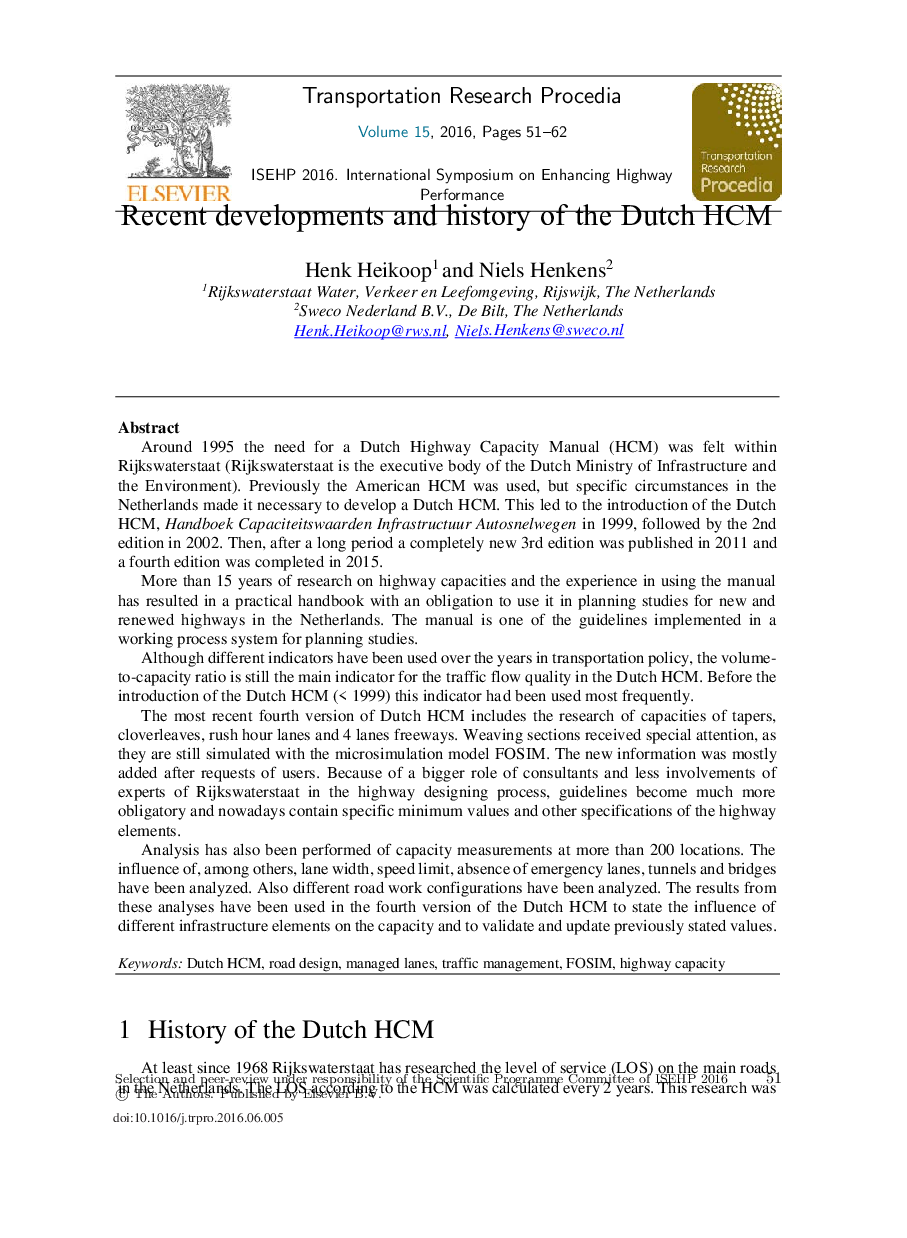 Around 1995 the need for a Dutch Highway Capacity Manual (HCM) was felt within Rijkswaterstaat (Rijkswaterstaat is the executive body of the Dutch Ministry of Infrastructure and the Environment). Previously the American HCM was used, but specific circumstances in the Netherlands made it necessary to develop a Dutch HCM. This led to the introduction of the Dutch HCM, Handboek Capaciteitswaarden Infrastructuur Autosnelwegen in 1999, followed by the 2nd edition in 2002. Then, after a long period a completely new 3rd edition was published in 2011 and a fourth edition was completed in 2015. More than 15 years of research on highway capacities and the experience in using the manual has resulted in a practical handbook with an obligation to use it in planning studies for new and renewed highways in the Netherlands. The manual is one of the guidelines implemented in a working process system for planning studies. Although different indicators have been used over the years in transportation policy, the volume-to-capacity ratio is still the main indicator for the traffic flow quality in the Dutch HCM. Before the introduction of the Dutch HCM (< 1999) this indicator had been used most frequently. The most recent fourth version of Dutch HCM includes the research of capacities of tapers, cloverleaves, rush hour lanes and 4 lanes freeways. Weaving sections received special attention, as they are still simulated with the microsimulation model FOSIM. The new information was mostly added after requests of users. Because of a bigger role of consultants and less involvements of experts of Rijkswaterstaat in the highway designing process, guidelines become much more obligatory and nowadays contain specific minimum values and other specifications of the highway elements. Analysis has also been performed of capacity measurements at more than 200 locations. The influence of, among others, lane width, speed limit, absence of emergency lanes, tunnels and bridges have been analyzed. Also different road work configurations have been analyzed. The results from these analyses have been used in the fourth version of the Dutch HCM to state the influence of different infrastructure elements on the capacity and to validate and update previously stated values.