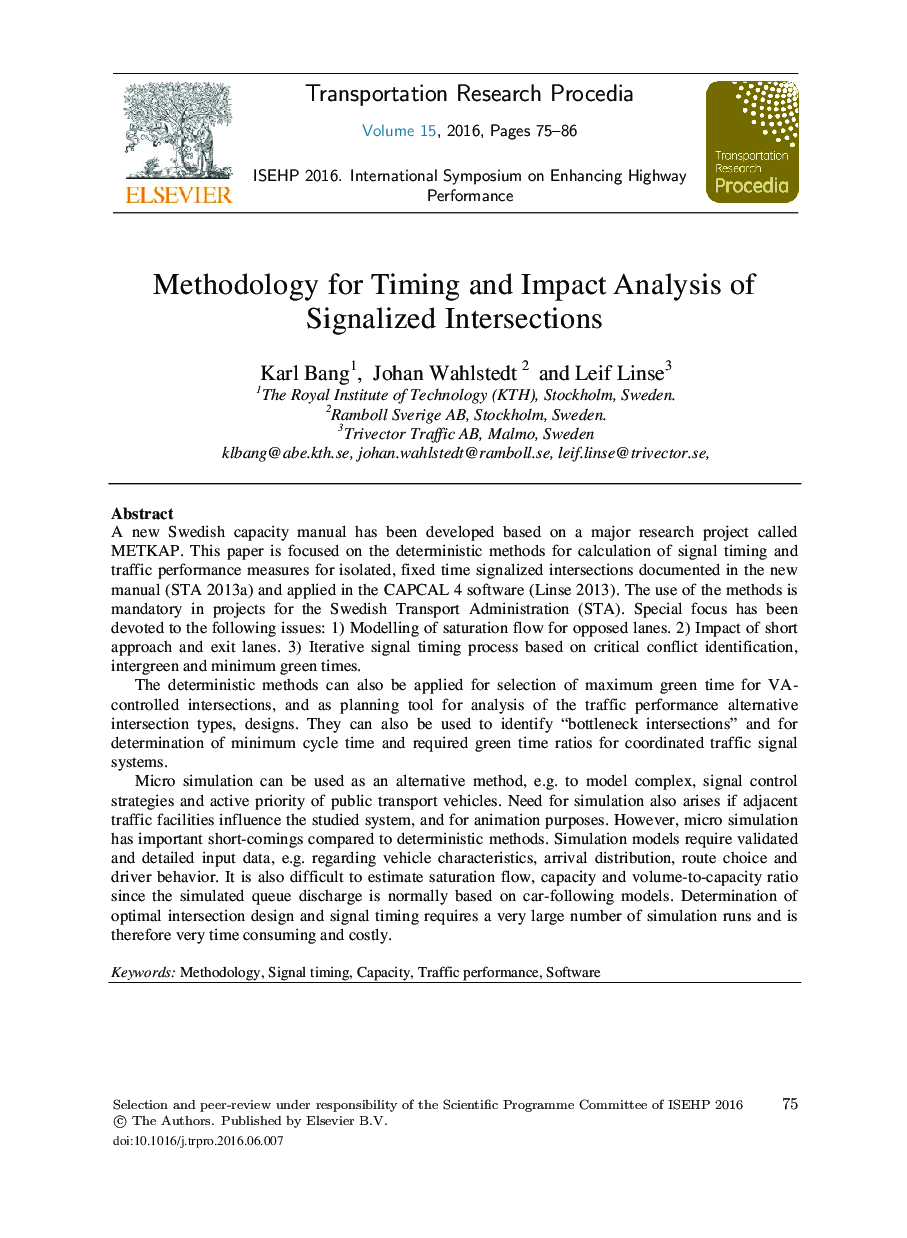 A detailed procedure for capacity analysis of signalized intersections was first produced in 1976 and presented at the TRB Annual meeting (Bang, Hansson, Peterson 1978). In the eighties computer aids (named CAPCAL) based on this methodology were developed including traffic as well as safety and emission performance measures for different types of at-grade intersections. Capcal has been continuously updated since then, the last version CAPCAL 4.1 was based on a major Swedish HCM project called METKAP 2009 – 2013. The theoretical basis for the calculation procedures as well as the software are still subject to revisions based on user inputs. National base parameters and other variables are also included in these updates. CAPCAL 4 also adds improved capabilities to visualize calculation results. The use of CAPCAL is mandatory in projects for the Swedish National Road Authority, and it is also commonly used by local authorities, consultants and universities in Sweden.The computational methodology for signalized intersections is based on an iterative process including the following functions for each calculation cycle:Determination of saturation flow for all types of unopposed or opposed discharge. Traffic flow distribution between lanes in the same sub-approach.Identification of the critical conflict point for traffic streams that are served by different main signal phases (Min∑_1^n▒q/s).Signal timing for minimum total delay or other object function.Determination of traffic performance at normal and oversaturated conditionsSpecial consideration has been devoted to development of the following sub modules: Automatic calculation of inter-green times and minimum green periods which give instant feedback of geometry changes Short lane utilization and contribution to approach bottleneck capacity. Procedure for identification of the critical conflict point for complex intersection configurations and phase schemes including extra or alternative phases for efficient discharge of turning movements.Optimal signal timing including considerations to minimum green and lost time restraints Consideration of exit capacity Calculation of delay and other traffic performance variables for forcasted traffic flows including improved handling of oversaturation Linking of capacity model to existing modules for calculating impact on environment, costs and traffic safety.The method is limited to isolated intersections, and based on fixed timed signals. Impacts of Traffic Actuated signal control is approximated by signal timing corrections (max green, green time extension intervals) based on traffic simulation results for different types of control strategies. In further work those corrections will be enhanced and also include the impacts of bus priority in vehicle actuated signal control using a more complex probability based model.