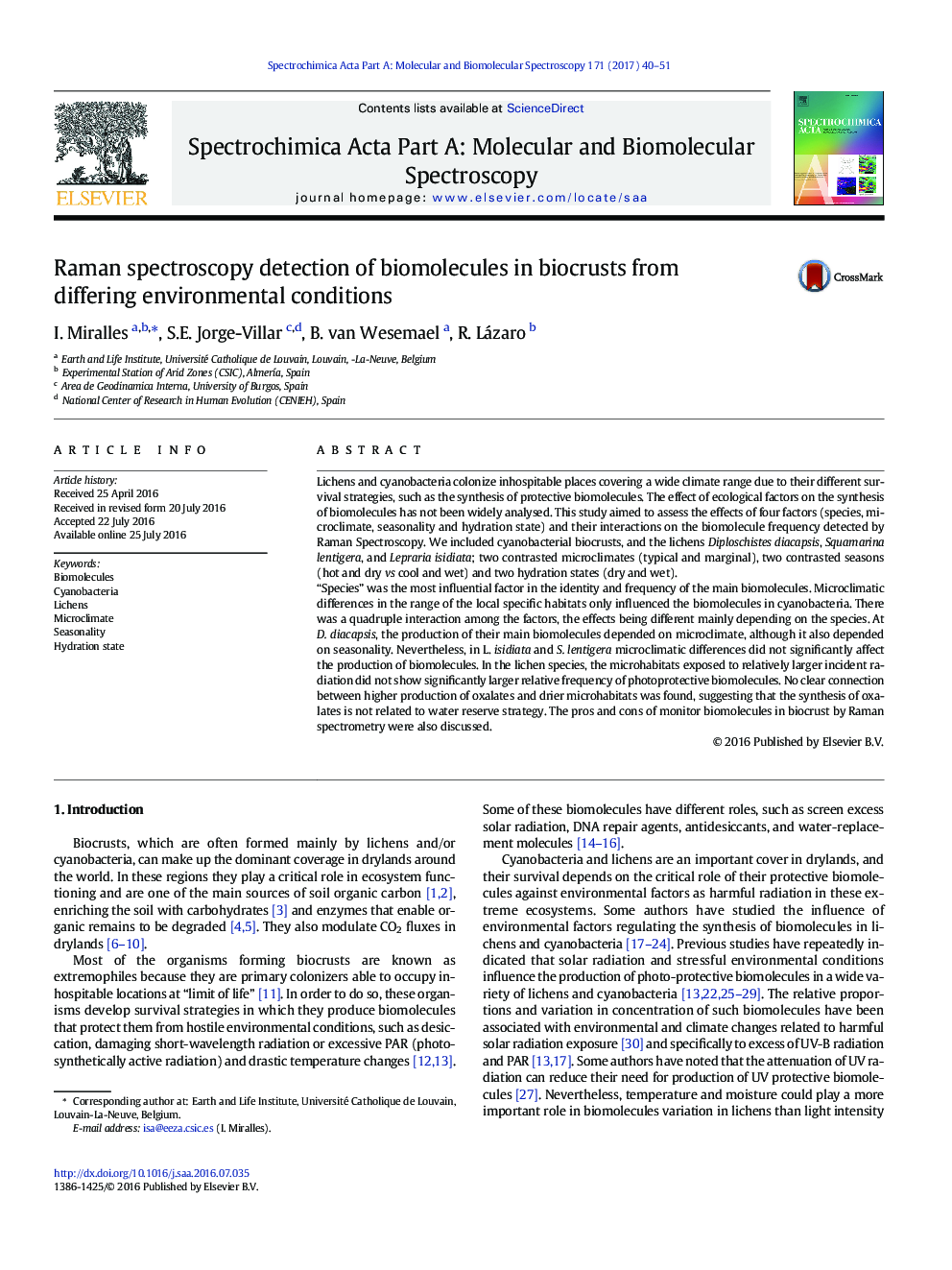 • We studied four biocrusts to connect biomolecule synthesis and ecological factors.
• We use Raman Spectroscopy for nondestructive biomolecular characterization.
• Photoprotectors resulted linked to microclimate in cyanobacteria, but not in lichens.
• Water storage or photo-protectors role of the calcium oxalates is not supported.
• Hydration state affects biomolecules detection by Raman spectroscopy.

Lichens and cyanobacteria colonize inhospitable places covering a wide climate range due to their different survival strategies, such as the synthesis of protective biomolecules. The effect of ecological factors on the synthesis of biomolecules has not been widely analysed. This study aimed to assess the effects of four factors (species, microclimate, seasonality and hydration state) and their interactions on the biomolecule frequency detected by Raman Spectroscopy. We included cyanobacterial biocrusts, and the lichens Diploschistes diacapsis, Squamarina lentigera, and Lepraria isidiata; two contrasted microclimates (typical and marginal), two contrasted seasons (hot and dry vs cool and wet) and two hydration states (dry and wet).“Species” was the most influential factor in the identity and frequency of the main biomolecules. Microclimatic differences in the range of the local specific habitats only influenced the biomolecules in cyanobacteria. There was a quadruple interaction among the factors, the effects being different mainly depending on the species. At D. diacapsis, the production of their main biomolecules depended on microclimate, although it also depended on seasonality. Nevertheless, in L. isidiata and S. lentigera microclimatic differences did not significantly affect the production of biomolecules. In the lichen species, the microhabitats exposed to relatively larger incident radiation did not show significantly larger relative frequency of photoprotective biomolecules. No clear connection between higher production of oxalates and drier microhabitats was found, suggesting that the synthesis of oxalates is not related to water reserve strategy. The pros and cons of monitor biomolecules in biocrust by Raman spectrometry were also discussed.