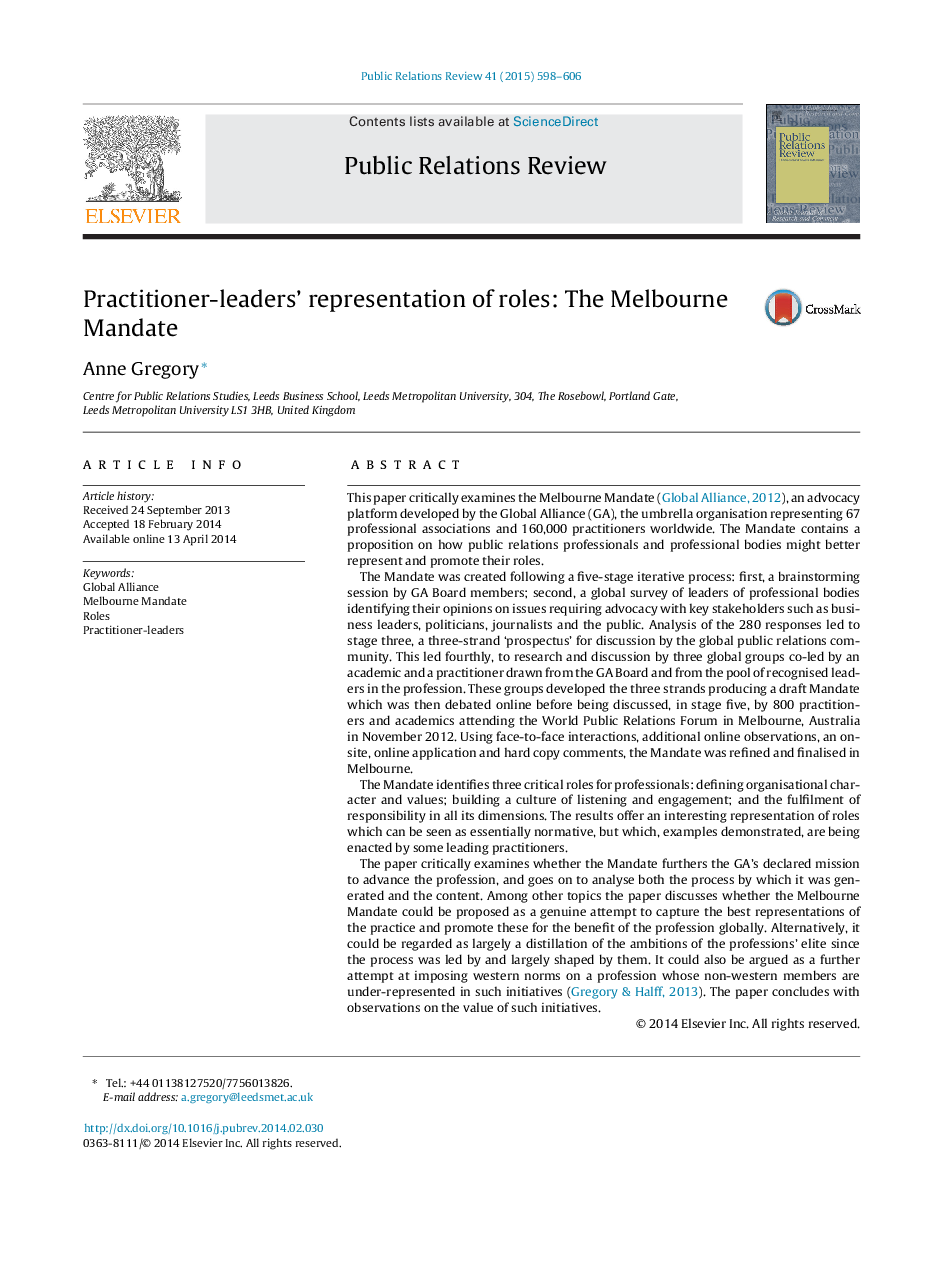 This paper critically examines the Melbourne Mandate (Global Alliance, 2012), an advocacy platform developed by the Global Alliance (GA), the umbrella organisation representing 67 professional associations and 160,000 practitioners worldwide. The Mandate contains a proposition on how public relations professionals and professional bodies might better represent and promote their roles.The Mandate was created following a five-stage iterative process: first, a brainstorming session by GA Board members; second, a global survey of leaders of professional bodies identifying their opinions on issues requiring advocacy with key stakeholders such as business leaders, politicians, journalists and the public. Analysis of the 280 responses led to stage three, a three-strand ‘prospectus’ for discussion by the global public relations community. This led fourthly, to research and discussion by three global groups co-led by an academic and a practitioner drawn from the GA Board and from the pool of recognised leaders in the profession. These groups developed the three strands producing a draft Mandate which was then debated online before being discussed, in stage five, by 800 practitioners and academics attending the World Public Relations Forum in Melbourne, Australia in November 2012. Using face-to-face interactions, additional online observations, an on-site, online application and hard copy comments, the Mandate was refined and finalised in Melbourne.The Mandate identifies three critical roles for professionals: defining organisational character and values; building a culture of listening and engagement; and the fulfilment of responsibility in all its dimensions. The results offer an interesting representation of roles which can be seen as essentially normative, but which, examples demonstrated, are being enacted by some leading practitioners.The paper critically examines whether the Mandate furthers the GA's declared mission to advance the profession, and goes on to analyse both the process by which it was generated and the content. Among other topics the paper discusses whether the Melbourne Mandate could be proposed as a genuine attempt to capture the best representations of the practice and promote these for the benefit of the profession globally. Alternatively, it could be regarded as largely a distillation of the ambitions of the professions’ elite since the process was led by and largely shaped by them. It could also be argued as a further attempt at imposing western norms on a profession whose non-western members are under-represented in such initiatives (Gregory & Halff, 2013). The paper concludes with observations on the value of such initiatives.