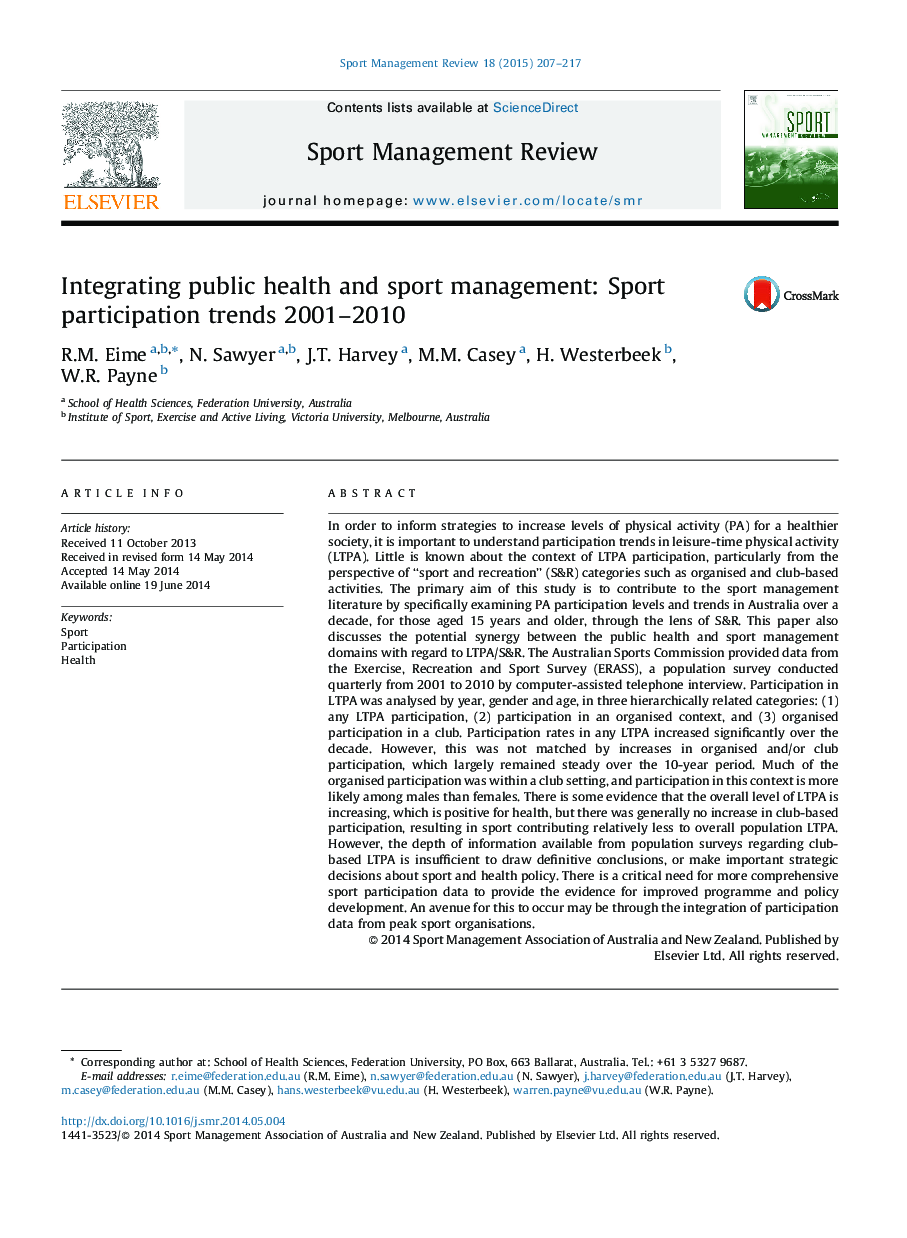 • We examine ten year sport and recreation participation levels and trends.
• Participation in general levels of leisure time physical activity increased.
• Organised and/or club based participation remained steady over the decade.
• There is a need for improved sport participation data to inform policy development.

In order to inform strategies to increase levels of physical activity (PA) for a healthier society, it is important to understand participation trends in leisure-time physical activity (LTPA). Little is known about the context of LTPA participation, particularly from the perspective of “sport and recreation” (S&R) categories such as organised and club-based activities. The primary aim of this study is to contribute to the sport management literature by specifically examining PA participation levels and trends in Australia over a decade, for those aged 15 years and older, through the lens of S&R. This paper also discusses the potential synergy between the public health and sport management domains with regard to LTPA/S&R. The Australian Sports Commission provided data from the Exercise, Recreation and Sport Survey (ERASS), a population survey conducted quarterly from 2001 to 2010 by computer-assisted telephone interview. Participation in LTPA was analysed by year, gender and age, in three hierarchically related categories: (1) any LTPA participation, (2) participation in an organised context, and (3) organised participation in a club. Participation rates in any LTPA increased significantly over the decade. However, this was not matched by increases in organised and/or club participation, which largely remained steady over the 10-year period. Much of the organised participation was within a club setting, and participation in this context is more likely among males than females. There is some evidence that the overall level of LTPA is increasing, which is positive for health, but there was generally no increase in club-based participation, resulting in sport contributing relatively less to overall population LTPA. However, the depth of information available from population surveys regarding club-based LTPA is insufficient to draw definitive conclusions, or make important strategic decisions about sport and health policy. There is a critical need for more comprehensive sport participation data to provide the evidence for improved programme and policy development. An avenue for this to occur may be through the integration of participation data from peak sport organisations.