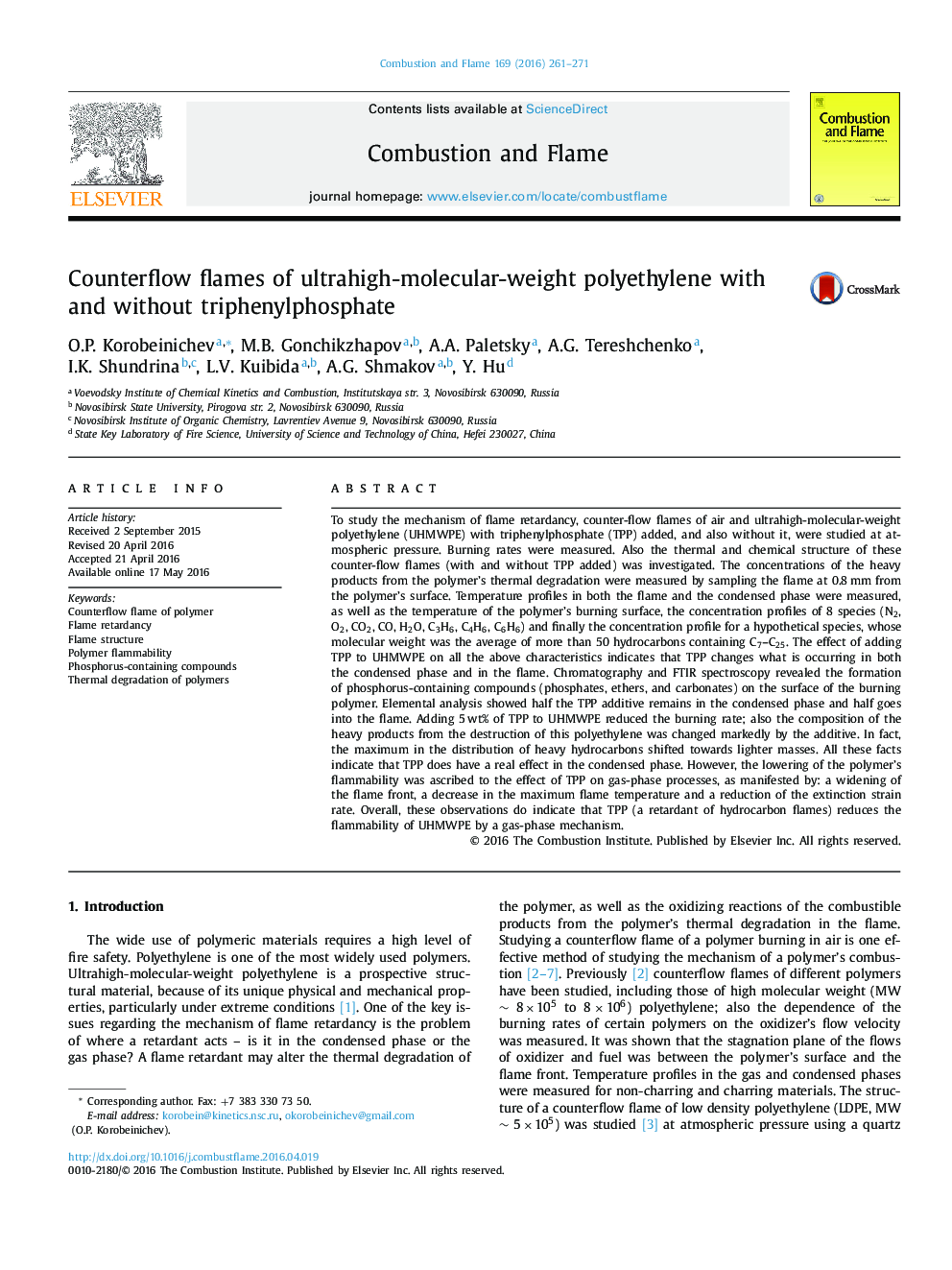 To study the mechanism of flame retardancy, counter-flow flames of air and ultrahigh-molecular-weight polyethylene (UHMWPE) with triphenylphosphate (TPP) added, and also without it, were studied at atmospheric pressure. Burning rates were measured. Also the thermal and chemical structure of these counter-flow flames (with and without TPP added) was investigated. The concentrations of the heavy products from the polymer's thermal degradation were measured by sampling the flame at 0.8 mm from the polymer's surface. Temperature profiles in both the flame and the condensed phase were measured, as well as the temperature of the polymer's burning surface, the concentration profiles of 8 species (N2, O2, CO2, CO, H2O, C3H6, C4H6, C6H6) and finally the concentration profile for a hypothetical species, whose molecular weight was the average of more than 50 hydrocarbons containing C7–C25. The effect of adding TPP to UHMWPE on all the above characteristics indicates that TPP changes what is occurring in both the condensed phase and in the flame. Chromatography and FTIR spectroscopy revealed the formation of phosphorus-containing compounds (phosphates, ethers, and carbonates) on the surface of the burning polymer. Elemental analysis showed half the TPP additive remains in the condensed phase and half goes into the flame. Adding 5 wt% of TPP to UHMWPE reduced the burning rate; also the composition of the heavy products from the destruction of this polyethylene was changed markedly by the additive. In fact, the maximum in the distribution of heavy hydrocarbons shifted towards lighter masses. All these facts indicate that TPP does have a real effect in the condensed phase. However, the lowering of the polymer's flammability was ascribed to the effect of TPP on gas-phase processes, as manifested by: a widening of the flame front, a decrease in the maximum flame temperature and a reduction of the extinction strain rate. Overall, these observations do indicate that TPP (a retardant of hydrocarbon flames) reduces the flammability of UHMWPE by a gas-phase mechanism.