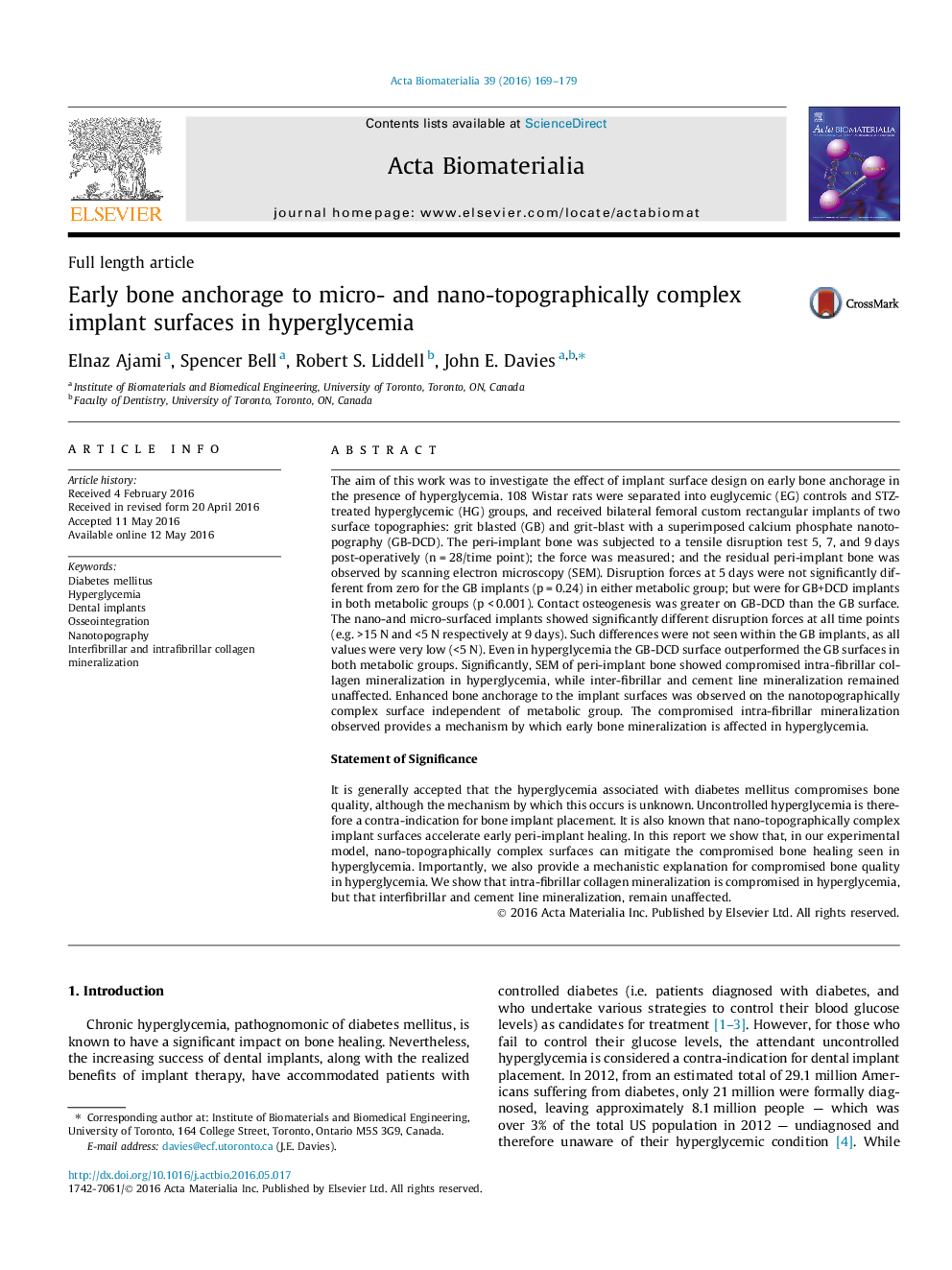 The aim of this work was to investigate the effect of implant surface design on early bone anchorage in the presence of hyperglycemia. 108 Wistar rats were separated into euglycemic (EG) controls and STZ-treated hyperglycemic (HG) groups, and received bilateral femoral custom rectangular implants of two surface topographies: grit blasted (GB) and grit-blast with a superimposed calcium phosphate nanotopography (GB-DCD). The peri-implant bone was subjected to a tensile disruption test 5, 7, and 9 days post-operatively (n = 28/time point); the force was measured; and the residual peri-implant bone was observed by scanning electron microscopy (SEM). Disruption forces at 5 days were not significantly different from zero for the GB implants (p = 0.24) in either metabolic group; but were for GB+DCD implants in both metabolic groups (p < 0.001). Contact osteogenesis was greater on GB-DCD than the GB surface. The nano-and micro-surfaced implants showed significantly different disruption forces at all time points (e.g. >15 N and <5 N respectively at 9 days). Such differences were not seen within the GB implants, as all values were very low (<5 N). Even in hyperglycemia the GB-DCD surface outperformed the GB surfaces in both metabolic groups. Significantly, SEM of peri-implant bone showed compromised intra-fibrillar collagen mineralization in hyperglycemia, while inter-fibrillar and cement line mineralization remained unaffected. Enhanced bone anchorage to the implant surfaces was observed on the nanotopographically complex surface independent of metabolic group. The compromised intra-fibrillar mineralization observed provides a mechanism by which early bone mineralization is affected in hyperglycemia.Statement of SignificanceIt is generally accepted that the hyperglycemia associated with diabetes mellitus compromises bone quality, although the mechanism by which this occurs is unknown. Uncontrolled hyperglycemia is therefore a contra-indication for bone implant placement. It is also known that nano-topographically complex implant surfaces accelerate early peri-implant healing. In this report we show that, in our experimental model, nano-topographically complex surfaces can mitigate the compromised bone healing seen in hyperglycemia. Importantly, we also provide a mechanistic explanation for compromised bone quality in hyperglycemia. We show that intra‐fibrillar collagen mineralization is compromised in hyperglycemia, but that interfibrillar and cement line mineralization, remain unaffected.