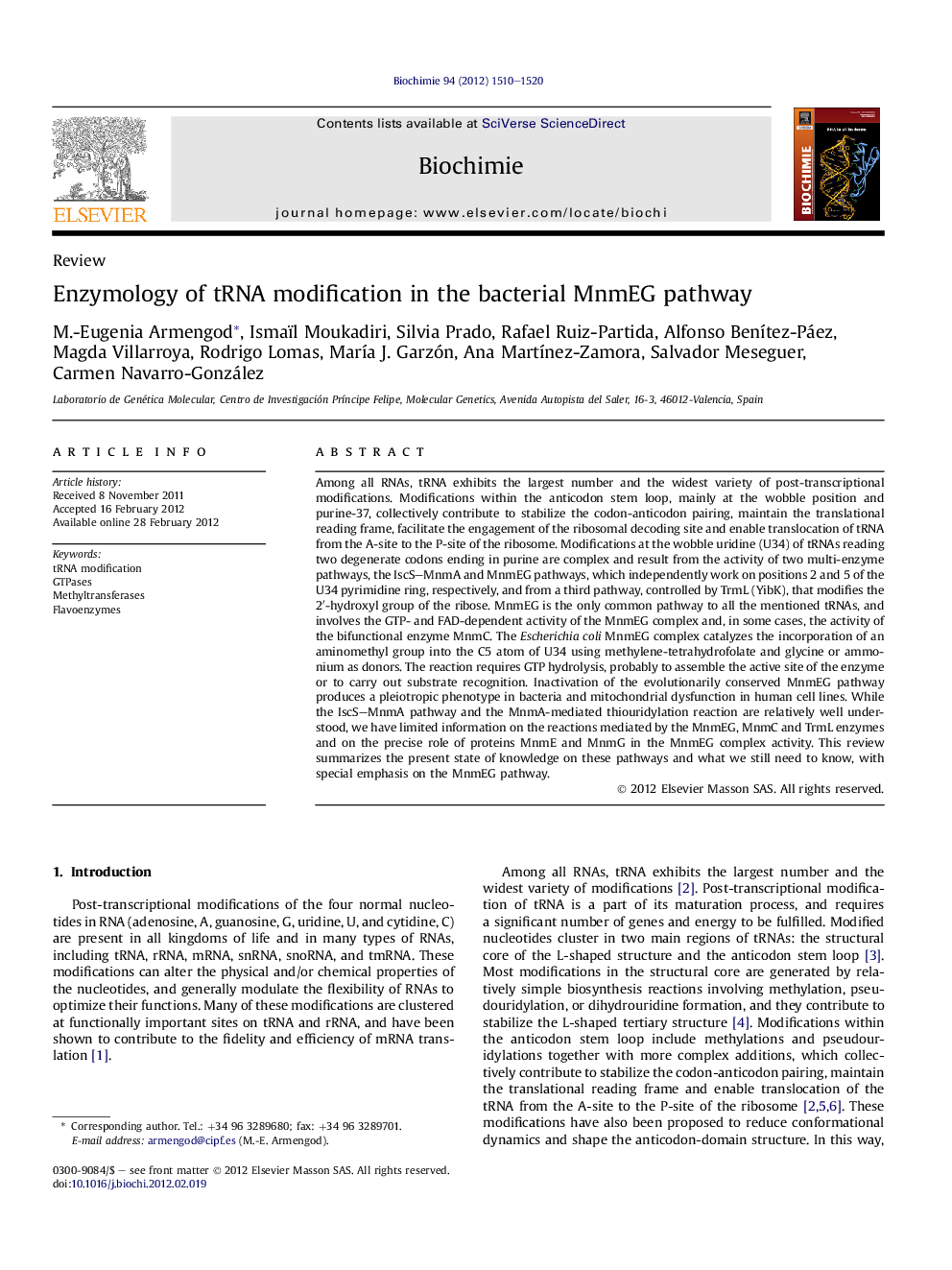 Among all RNAs, tRNA exhibits the largest number and the widest variety of post-transcriptional modifications. Modifications within the anticodon stem loop, mainly at the wobble position and purine-37, collectively contribute to stabilize the codon-anticodon pairing, maintain the translational reading frame, facilitate the engagement of the ribosomal decoding site and enable translocation of tRNA from the A-site to the P-site of the ribosome. Modifications at the wobble uridine (U34) of tRNAs reading two degenerate codons ending in purine are complex and result from the activity of two multi-enzyme pathways, the IscS–MnmA and MnmEG pathways, which independently work on positions 2 and 5 of the U34 pyrimidine ring, respectively, and from a third pathway, controlled by TrmL (YibK), that modifies the 2′-hydroxyl group of the ribose. MnmEG is the only common pathway to all the mentioned tRNAs, and involves the GTP- and FAD-dependent activity of the MnmEG complex and, in some cases, the activity of the bifunctional enzyme MnmC. The Escherichia coli MnmEG complex catalyzes the incorporation of an aminomethyl group into the C5 atom of U34 using methylene-tetrahydrofolate and glycine or ammonium as donors. The reaction requires GTP hydrolysis, probably to assemble the active site of the enzyme or to carry out substrate recognition. Inactivation of the evolutionarily conserved MnmEG pathway produces a pleiotropic phenotype in bacteria and mitochondrial dysfunction in human cell lines. While the IscS–MnmA pathway and the MnmA-mediated thiouridylation reaction are relatively well understood, we have limited information on the reactions mediated by the MnmEG, MnmC and TrmL enzymes and on the precise role of proteins MnmE and MnmG in the MnmEG complex activity. This review summarizes the present state of knowledge on these pathways and what we still need to know, with special emphasis on the MnmEG pathway.

► Modifications at tRNA's wobble uridine improve protein synthesis.
► We review the U34 modifications in tRNAs decoding purine-ending split codon boxes.
► The IscS–MnmA and TrmL pathways, producing s2U and Um/Cm, are briefly reviewed.
► Special attention is placed on the enzymes and reactions of the MnmEG pathway.