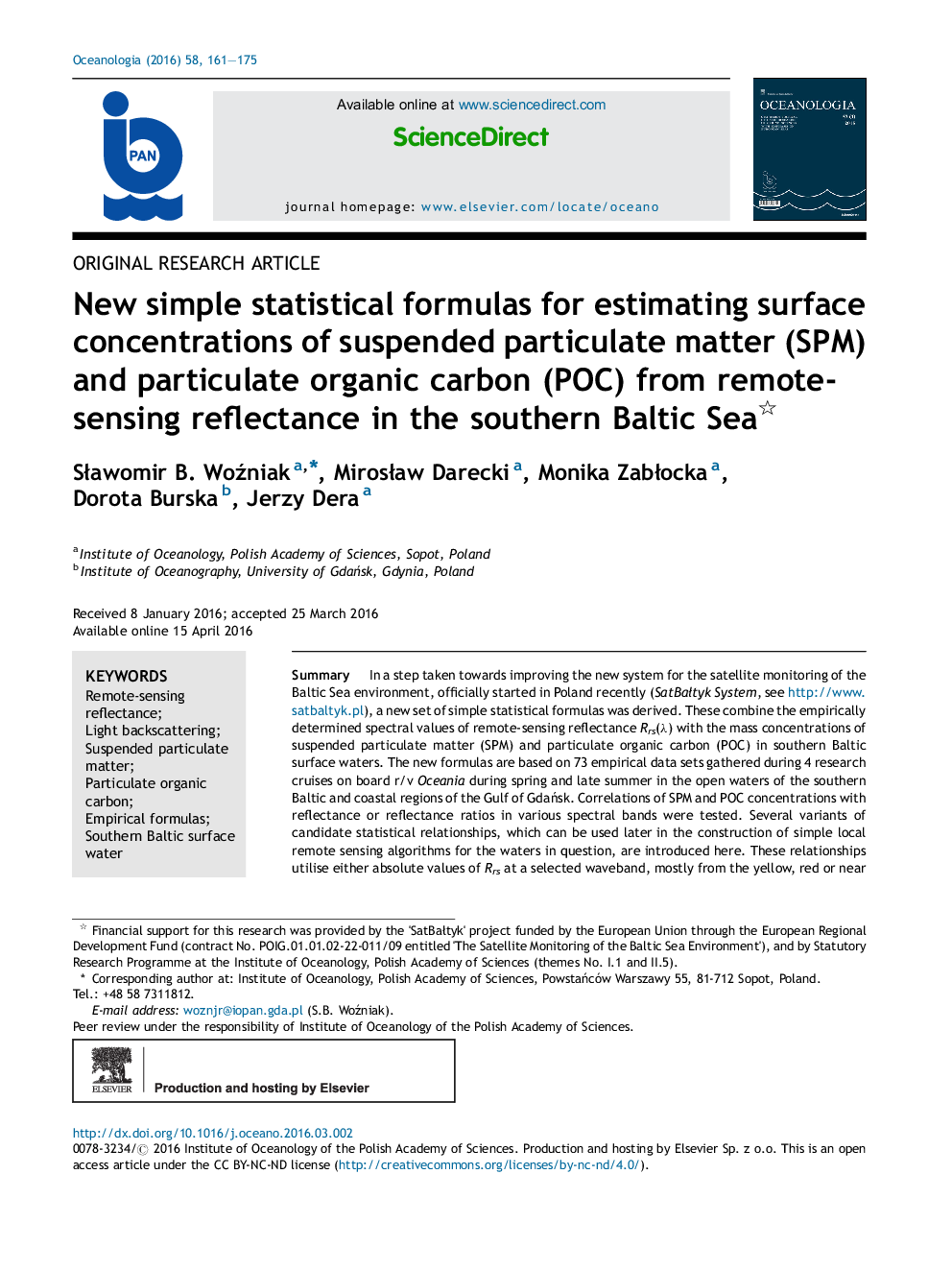 SummaryIn a step taken towards improving the new system for the satellite monitoring of the Baltic Sea environment, officially started in Poland recently (SatBałtyk System, see http://www.satbaltyk.pl), a new set of simple statistical formulas was derived. These combine the empirically determined spectral values of remote-sensing reflectance Rrs(λ) with the mass concentrations of suspended particulate matter (SPM) and particulate organic carbon (POC) in southern Baltic surface waters. The new formulas are based on 73 empirical data sets gathered during 4 research cruises on board r/v Oceania during spring and late summer in the open waters of the southern Baltic and coastal regions of the Gulf of Gdańsk. Correlations of SPM and POC concentrations with reflectance or reflectance ratios in various spectral bands were tested. Several variants of candidate statistical relationships, which can be used later in the construction of simple local remote sensing algorithms for the waters in question, are introduced here. These relationships utilise either absolute values of Rrs at a selected waveband, mostly from the yellow, red or near infrared part of the light spectrum, or Rrs ratios for two different wavebands, mostly ratios of blue to yellow, blue to red and blue to infrared or green to yellow and green to red spectral band. From the numerous simple approximate relationships established, the following two, characterised by large correlation coefficients r2 and small standard error factors X, may serve as examples: SPM [g m−3] = 1480(Rrs(710))0.902 (with the factors r2 = 0.86; X = 1.26) (the unit of Rrs(λ) is [sr−1]) and POC [g m−3] = 0.814(Rrs(555)/Rrs(589))−4.42 (r2 = 0.75; X = 1.37). From the practical standpoint, taking into consideration light wavelengths that are close to or concurrent with the currently available spectral bands used in satellite observations of the Baltic Sea, another two formulas (using the same spectral ratio) are worth pointing out: SPM [g m−3] = 2.6(Rrs(490)/Rrs(625))−1.29 (r2 = 0.86; X = 1.25) and POC [g m−3] = 0.774(Rrs(490)/Rrs(625))−1.18 (r2 = 0.66; X = 1.44). The paper also presents a number of intermediate statistical relationships between SPM and POC concentrations, Rrs spectra and light backscattering coefficients in order to illustrate the simplified physical justification for some of the observed direct statistical relationships, presented as the main content of this work.