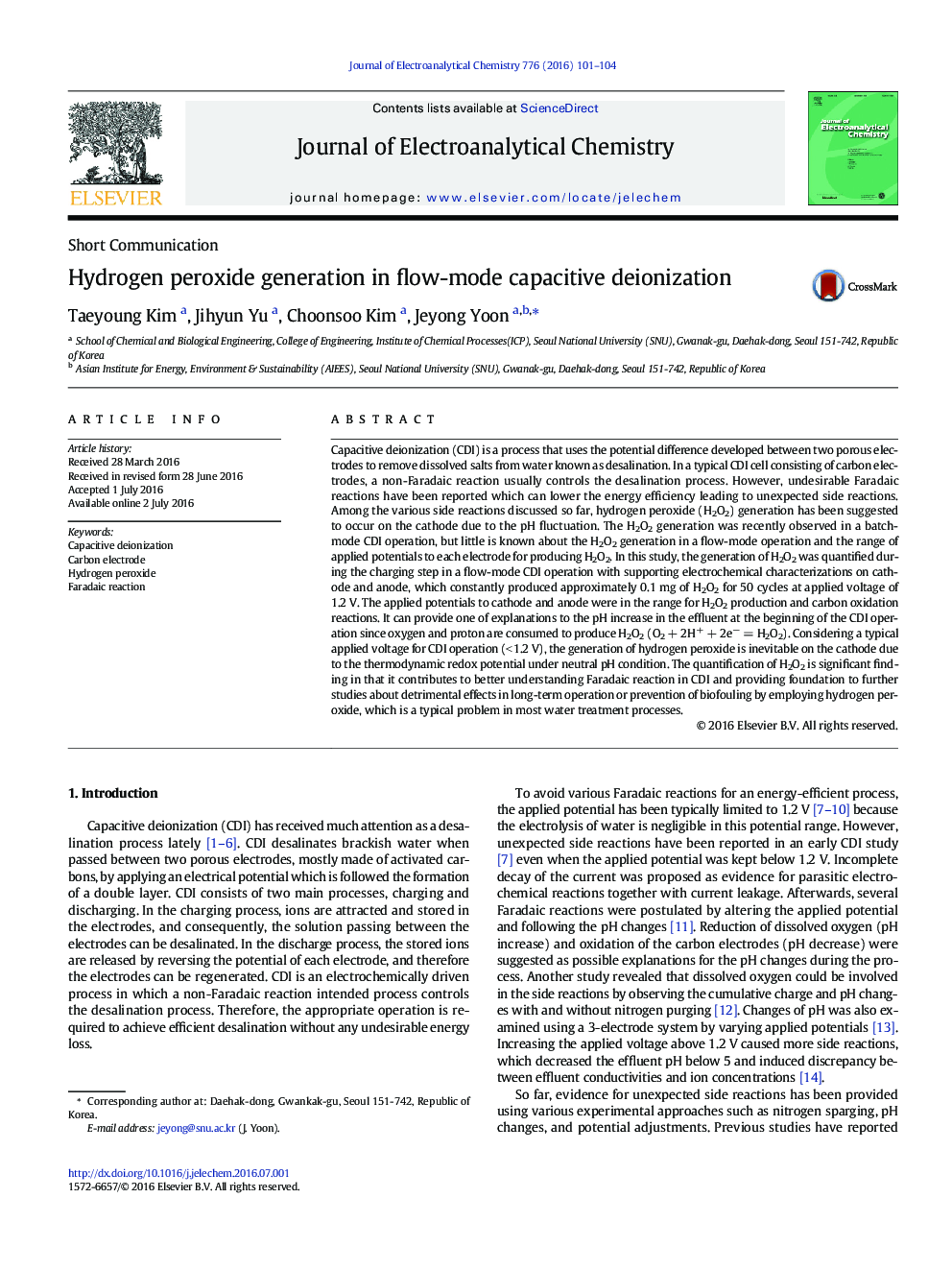 • One of side reactions in capacitive deionization (CDI) was investigated.
• The generation of hydrogen peroxide (H2O2) was quantified during the operation.
• Approximately 0.1 mg of H2O2 was constantly produced when 1.2 V was applied.
• The H2O2 generation can provide one of explanations to the initial pH increase.

Capacitive deionization (CDI) is a process that uses the potential difference developed between two porous electrodes to remove dissolved salts from water known as desalination. In a typical CDI cell consisting of carbon electrodes, a non-Faradaic reaction usually controls the desalination process. However, undesirable Faradaic reactions have been reported which can lower the energy efficiency leading to unexpected side reactions. Among the various side reactions discussed so far, hydrogen peroxide (H2O2) generation has been suggested to occur on the cathode due to the pH fluctuation. The H2O2 generation was recently observed in a batch-mode CDI operation, but little is known about the H2O2 generation in a flow-mode operation and the range of applied potentials to each electrode for producing H2O2. In this study, the generation of H2O2 was quantified during the charging step in a flow-mode CDI operation with supporting electrochemical characterizations on cathode and anode, which constantly produced approximately 0.1 mg of H2O2 for 50 cycles at applied voltage of 1.2 V. The applied potentials to cathode and anode were in the range for H2O2 production and carbon oxidation reactions. It can provide one of explanations to the pH increase in the effluent at the beginning of the CDI operation since oxygen and proton are consumed to produce H2O2 (O2 + 2H+ + 2e− = H2O2). Considering a typical applied voltage for CDI operation (< 1.2 V), the generation of hydrogen peroxide is inevitable on the cathode due to the thermodynamic redox potential under neutral pH condition. The quantification of H2O2 is significant finding in that it contributes to better understanding Faradaic reaction in CDI and providing foundation to further studies about detrimental effects in long-term operation or prevention of biofouling by employing hydrogen peroxide, which is a typical problem in most water treatment processes.