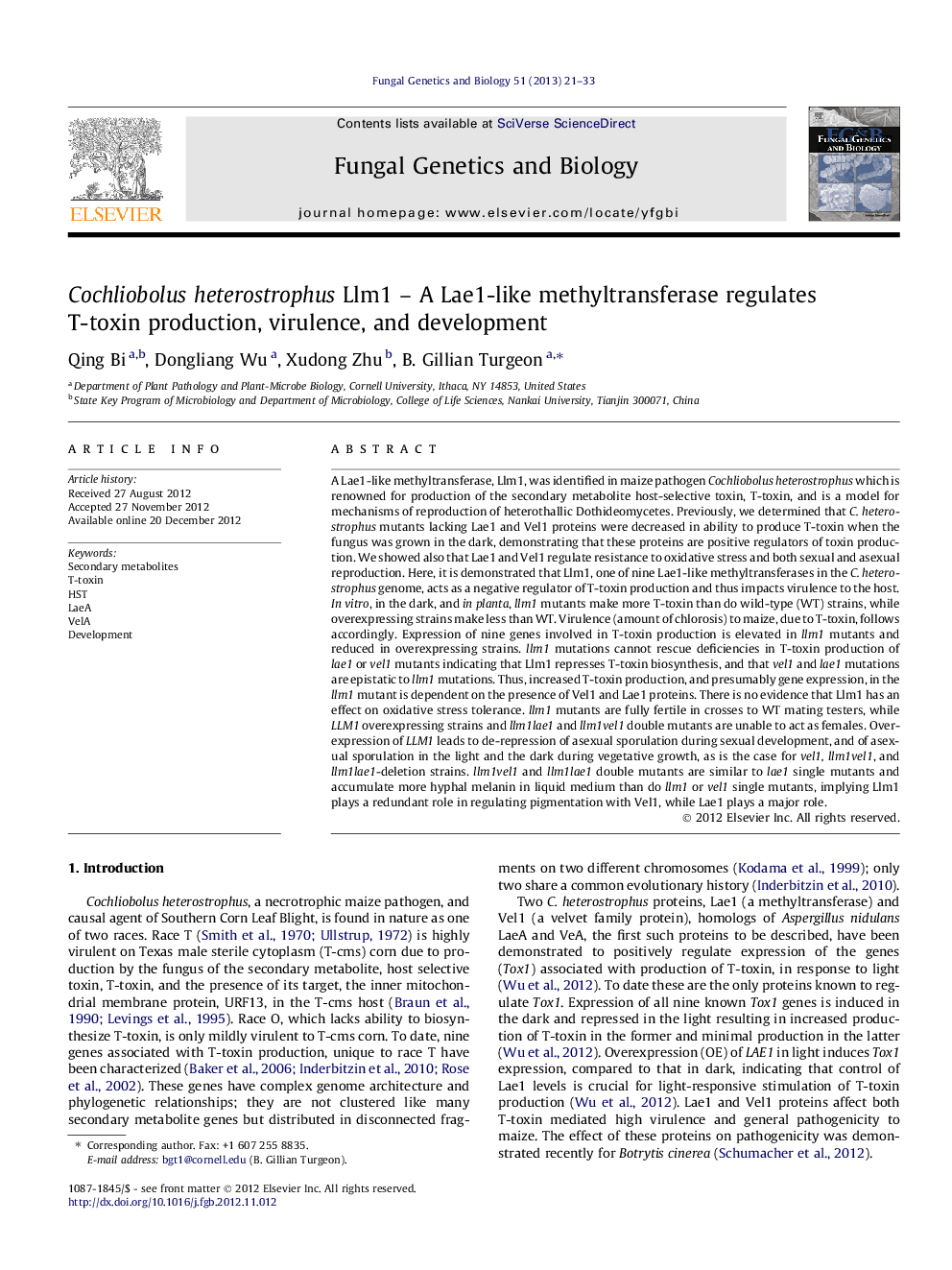 A Lae1-like methyltransferase, Llm1, was identified in maize pathogen Cochliobolus heterostrophus which is renowned for production of the secondary metabolite host-selective toxin, T-toxin, and is a model for mechanisms of reproduction of heterothallic Dothideomycetes. Previously, we determined that C. heterostrophus mutants lacking Lae1 and Vel1 proteins were decreased in ability to produce T-toxin when the fungus was grown in the dark, demonstrating that these proteins are positive regulators of toxin production. We showed also that Lae1 and Vel1 regulate resistance to oxidative stress and both sexual and asexual reproduction. Here, it is demonstrated that Llm1, one of nine Lae1-like methyltransferases in the C. heterostrophus genome, acts as a negative regulator of T-toxin production and thus impacts virulence to the host. In vitro, in the dark, and in planta, llm1 mutants make more T-toxin than do wild-type (WT) strains, while overexpressing strains make less than WT. Virulence (amount of chlorosis) to maize, due to T-toxin, follows accordingly. Expression of nine genes involved in T-toxin production is elevated in llm1 mutants and reduced in overexpressing strains. llm1 mutations cannot rescue deficiencies in T-toxin production of lae1 or vel1 mutants indicating that Llm1 represses T-toxin biosynthesis, and that vel1 and lae1 mutations are epistatic to llm1 mutations. Thus, increased T-toxin production, and presumably gene expression, in the llm1 mutant is dependent on the presence of Vel1 and Lae1 proteins. There is no evidence that Llm1 has an effect on oxidative stress tolerance. llm1 mutants are fully fertile in crosses to WT mating testers, while LLM1 overexpressing strains and llm1lae1 and llm1vel1 double mutants are unable to act as females. Overexpression of LLM1 leads to de-repression of asexual sporulation during sexual development, and of asexual sporulation in the light and the dark during vegetative growth, as is the case for vel1, llm1vel1, and llm1lae1-deletion strains. llm1vel1 and llm1lae1 double mutants are similar to lae1 single mutants and accumulate more hyphal melanin in liquid medium than do llm1 or vel1 single mutants, implying Llm1 plays a redundant role in regulating pigmentation with Vel1, while Lae1 plays a major role.