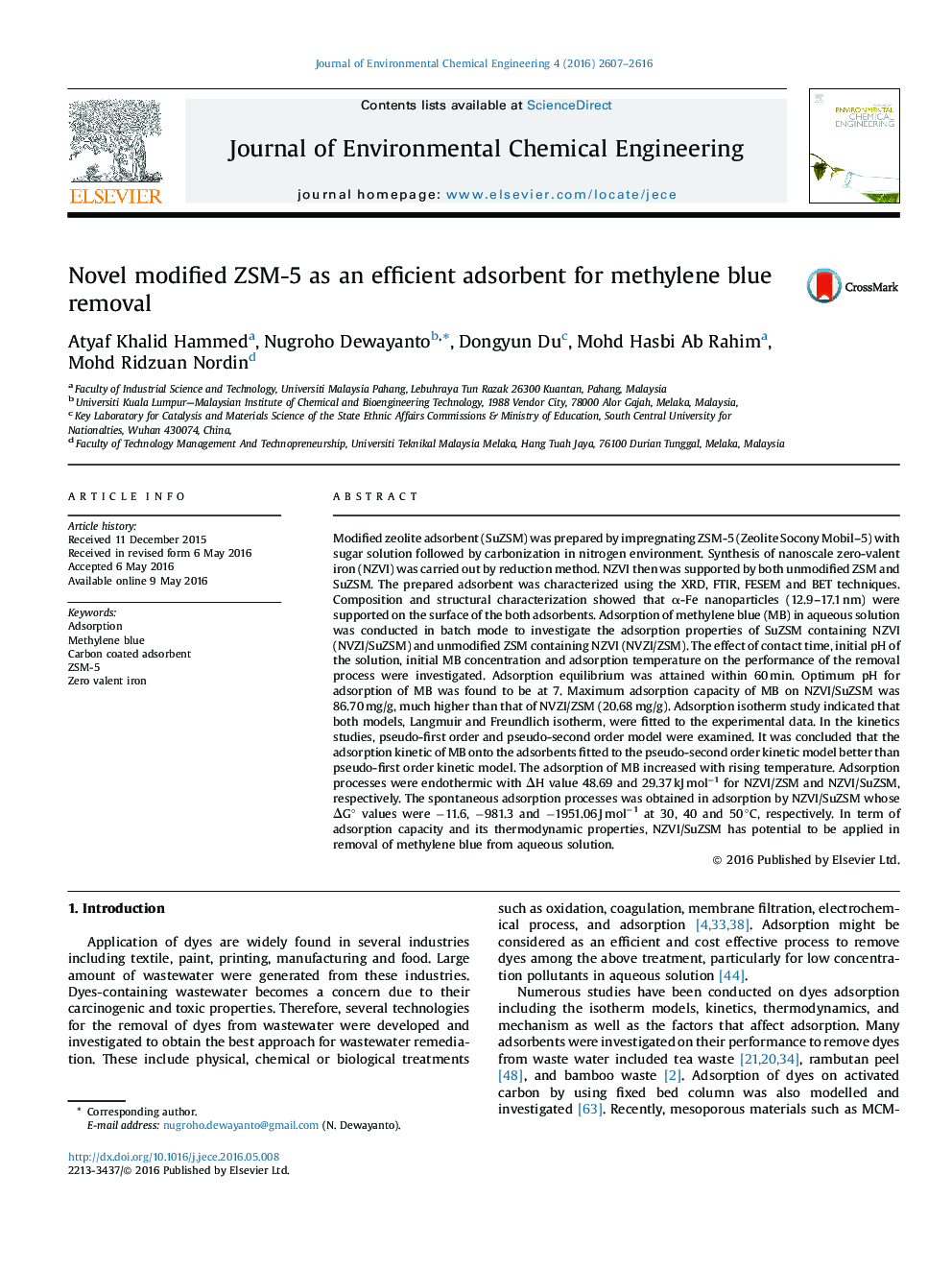 Modified zeolite adsorbent (SuZSM) was prepared by impregnating ZSM-5 (Zeolite Socony Mobil–5) with sugar solution followed by carbonization in nitrogen environment. Synthesis of nanoscale zero-valent iron (NZVI) was carried out by reduction method. NZVI then was supported by both unmodified ZSM and SuZSM. The prepared adsorbent was characterized using the XRD, FTIR, FESEM and BET techniques. Composition and structural characterization showed that α-Fe nanoparticles (12.9–17.1 nm) were supported on the surface of the both adsorbents. Adsorption of methylene blue (MB) in aqueous solution was conducted in batch mode to investigate the adsorption properties of SuZSM containing NZVI (NVZI/SuZSM) and unmodified ZSM containing NZVI (NVZI/ZSM). The effect of contact time, initial pH of the solution, initial MB concentration and adsorption temperature on the performance of the removal process were investigated. Adsorption equilibrium was attained within 60 min. Optimum pH for adsorption of MB was found to be at 7. Maximum adsorption capacity of MB on NZVI/SuZSM was 86.70 mg/g, much higher than that of NVZI/ZSM (20.68 mg/g). Adsorption isotherm study indicated that both models, Langmuir and Freundlich isotherm, were fitted to the experimental data. In the kinetics studies, pseudo-first order and pseudo-second order model were examined. It was concluded that the adsorption kinetic of MB onto the adsorbents fitted to the pseudo-second order kinetic model better than pseudo-first order kinetic model. The adsorption of MB increased with rising temperature. Adsorption processes were endothermic with ΔH value 48.69 and 29.37 kJ mol−1 for NZVI/ZSM and NZVI/SuZSM, respectively. The spontaneous adsorption processes was obtained in adsorption by NZVI/SuZSM whose ΔG° values were −11.6, −981.3 and −1951.06 J mol−1 at 30, 40 and 50 °C, respectively. In term of adsorption capacity and its thermodynamic properties, NZVI/SuZSM has potential to be applied in removal of methylene blue from aqueous solution.