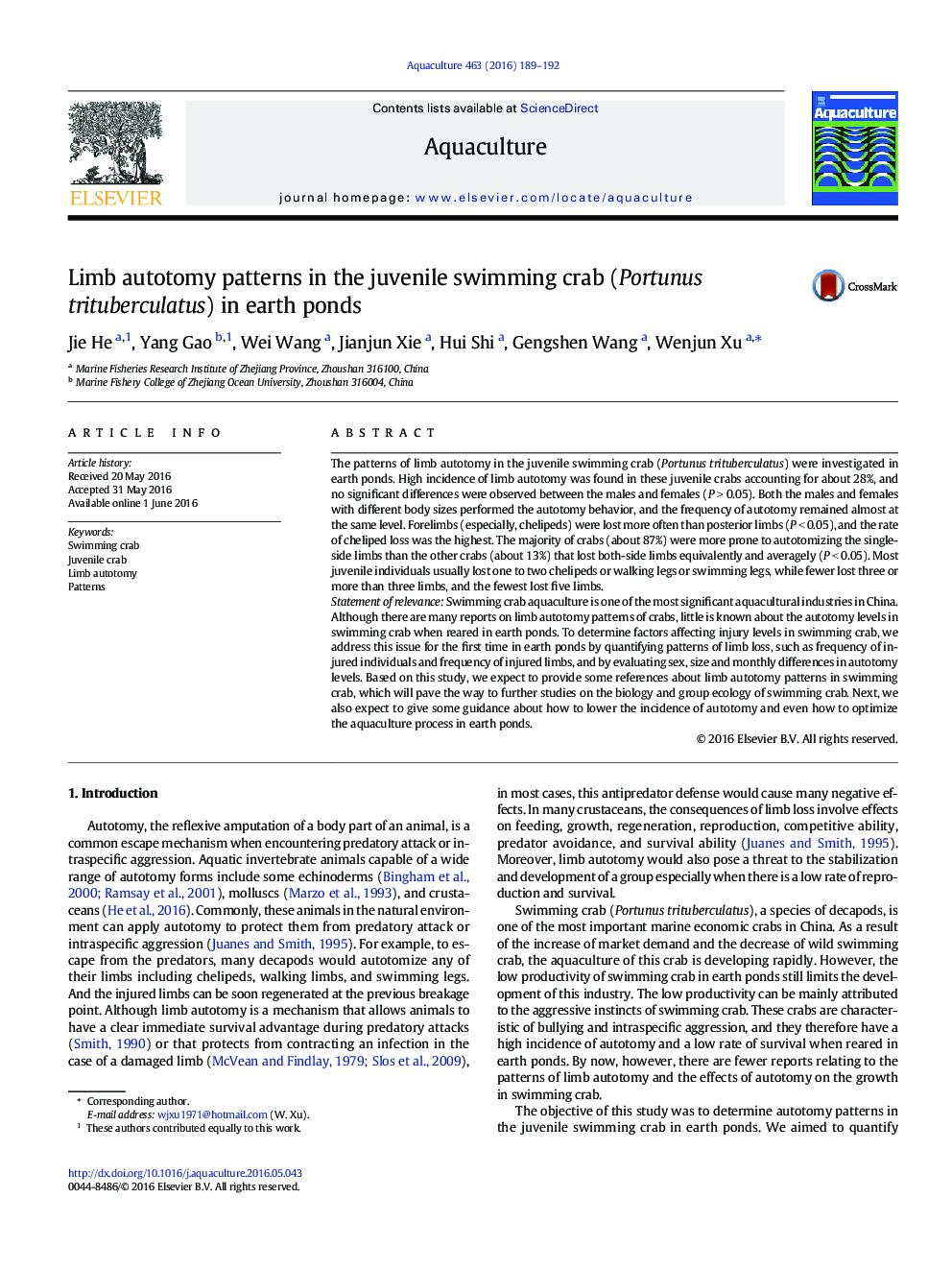 • High incidence of limb autotomy was found in swimming crab juveniles.
• No significant differences of autotomy patterns were observed between the males and females.
• Different sized individuals have almost the same autotomy level.
• Forelimbs (especially, chelipeds) were lost more often than posterior limbs.
• Most individuals tended to autotomize the single-side limbs.

The patterns of limb autotomy in the juvenile swimming crab (Portunus trituberculatus) were investigated in earth ponds. High incidence of limb autotomy was found in these juvenile crabs accounting for about 28%, and no significant differences were observed between the males and females (P > 0.05). Both the males and females with different body sizes performed the autotomy behavior, and the frequency of autotomy remained almost at the same level. Forelimbs (especially, chelipeds) were lost more often than posterior limbs (P < 0.05), and the rate of cheliped loss was the highest. The majority of crabs (about 87%) were more prone to autotomizing the single-side limbs than the other crabs (about 13%) that lost both-side limbs equivalently and averagely (P < 0.05). Most juvenile individuals usually lost one to two chelipeds or walking legs or swimming legs, while fewer lost three or more than three limbs, and the fewest lost five limbs.Statement of relevanceSwimming crab aquaculture is one of the most significant aquacultural industries in China. Although there are many reports on limb autotomy patterns of crabs, little is known about the autotomy levels in swimming crab when reared in earth ponds. To determine factors affecting injury levels in swimming crab, we address this issue for the first time in earth ponds by quantifying patterns of limb loss, such as frequency of injured individuals and frequency of injured limbs, and by evaluating sex, size and monthly differences in autotomy levels. Based on this study, we expect to provide some references about limb autotomy patterns in swimming crab, which will pave the way to further studies on the biology and group ecology of swimming crab. Next, we also expect to give some guidance about how to lower the incidence of autotomy and even how to optimize the aquaculture process in earth ponds.