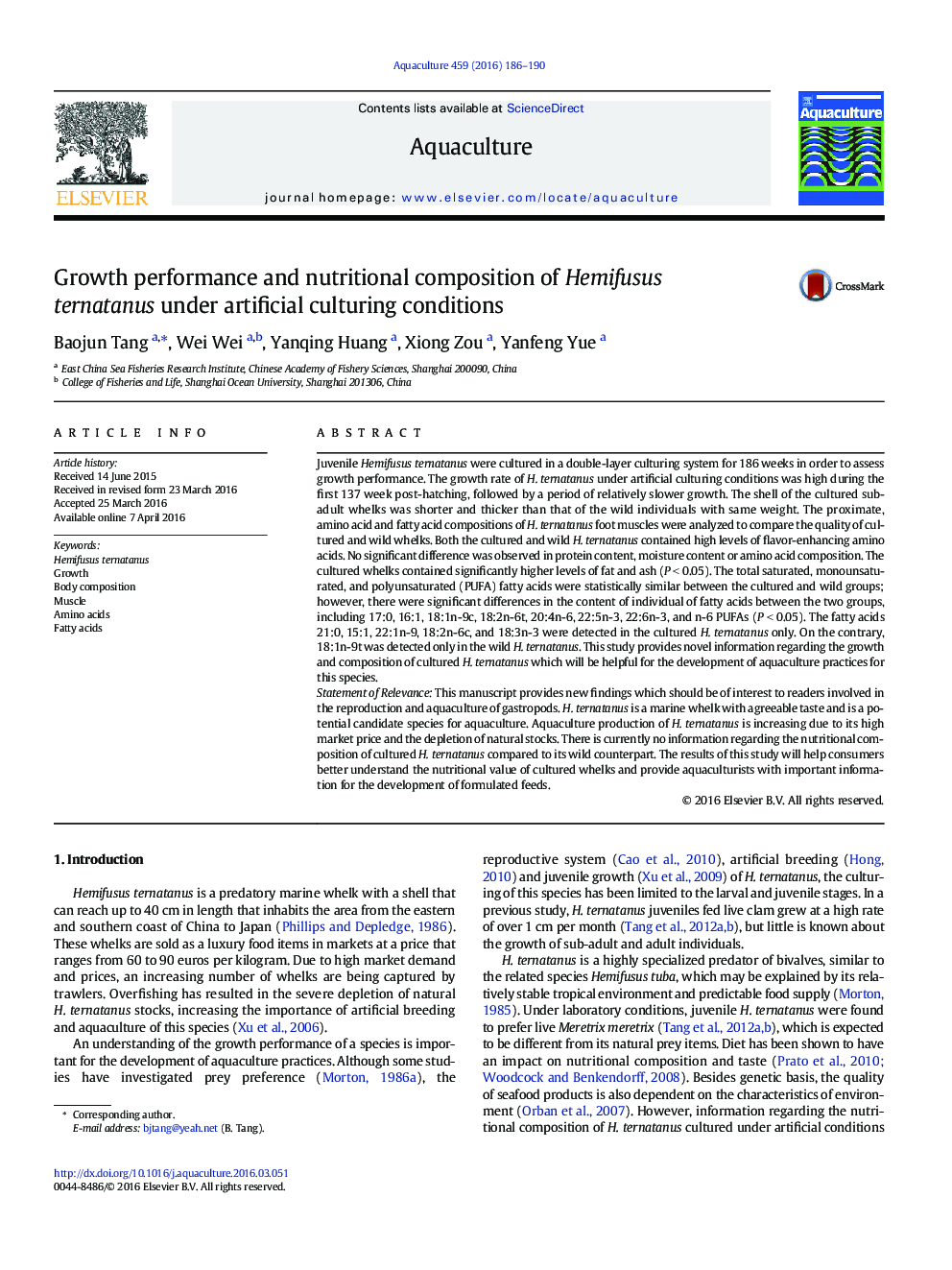 Juvenile Hemifusus ternatanus were cultured in a double-layer culturing system for 186 weeks in order to assess growth performance. The growth rate of H. ternatanus under artificial culturing conditions was high during the first 137 week post-hatching, followed by a period of relatively slower growth. The shell of the cultured sub-adult whelks was shorter and thicker than that of the wild individuals with same weight. The proximate, amino acid and fatty acid compositions of H. ternatanus foot muscles were analyzed to compare the quality of cultured and wild whelks. Both the cultured and wild H. ternatanus contained high levels of flavor-enhancing amino acids. No significant difference was observed in protein content, moisture content or amino acid composition. The cultured whelks contained significantly higher levels of fat and ash (P < 0.05). The total saturated, monounsaturated, and polyunsaturated (PUFA) fatty acids were statistically similar between the cultured and wild groups; however, there were significant differences in the content of individual of fatty acids between the two groups, including 17:0, 16:1, 18:1n-9c, 18:2n-6t, 20:4n-6, 22:5n-3, 22:6n-3, and n-6 PUFAs (P < 0.05). The fatty acids 21:0, 15:1, 22:1n-9, 18:2n-6c, and 18:3n-3 were detected in the cultured H. ternatanus only. On the contrary, 18:1n-9t was detected only in the wild H. ternatanus. This study provides novel information regarding the growth and composition of cultured H. ternatanus which will be helpful for the development of aquaculture practices for this species.Statement of RelevanceThis manuscript provides new findings which should be of interest to readers involved in the reproduction and aquaculture of gastropods. H. ternatanus is a marine whelk with agreeable taste and is a potential candidate species for aquaculture. Aquaculture production of H. ternatanus is increasing due to its high market price and the depletion of natural stocks. There is currently no information regarding the nutritional composition of cultured H. ternatanus compared to its wild counterpart. The results of this study will help consumers better understand the nutritional value of cultured whelks and provide aquaculturists with important information for the development of formulated feeds.