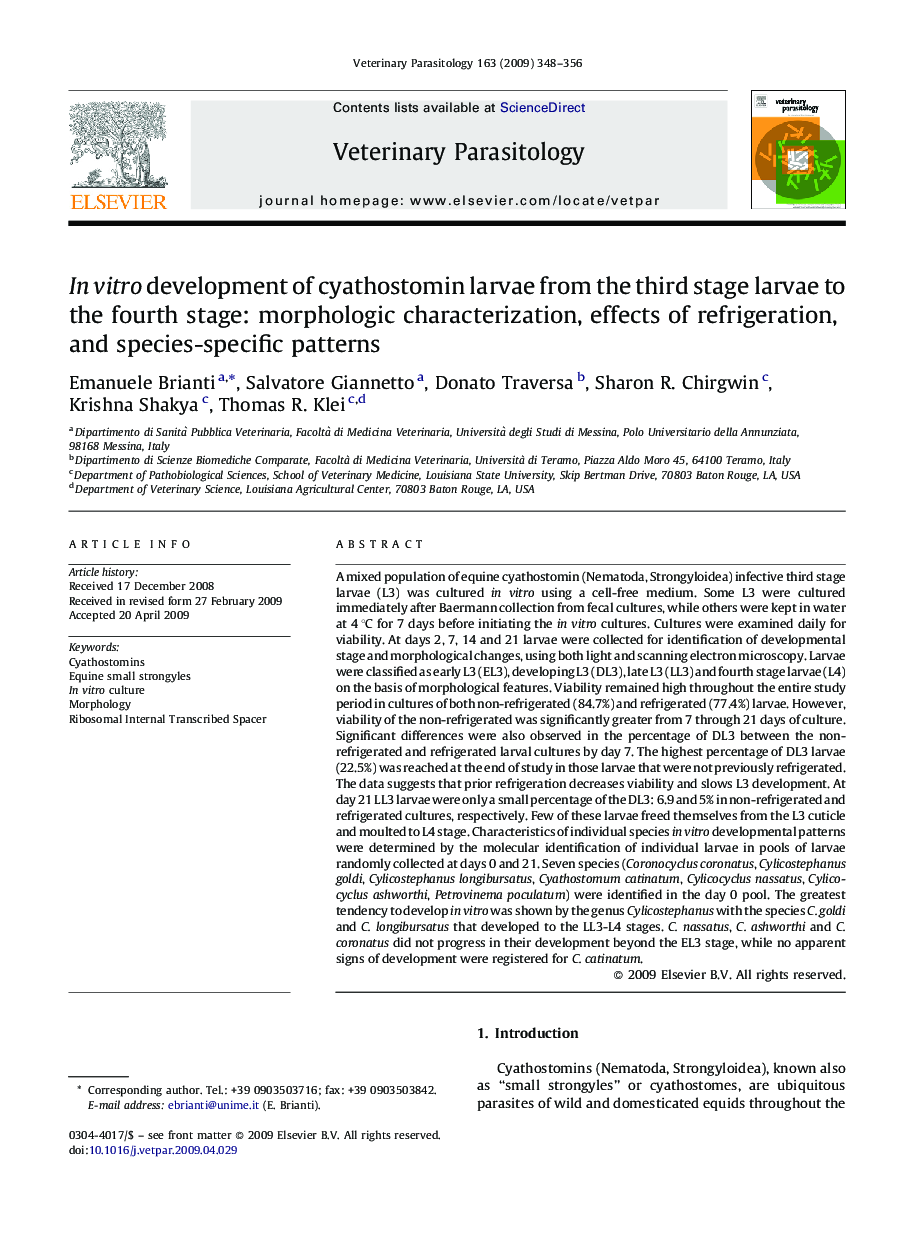 A mixed population of equine cyathostomin (Nematoda, Strongyloidea) infective third stage larvae (L3) was cultured in vitro using a cell-free medium. Some L3 were cultured immediately after Baermann collection from fecal cultures, while others were kept in water at 4 °C for 7 days before initiating the in vitro cultures. Cultures were examined daily for viability. At days 2, 7, 14 and 21 larvae were collected for identification of developmental stage and morphological changes, using both light and scanning electron microscopy. Larvae were classified as early L3 (EL3), developing L3 (DL3), late L3 (LL3) and fourth stage larvae (L4) on the basis of morphological features. Viability remained high throughout the entire study period in cultures of both non-refrigerated (84.7%) and refrigerated (77.4%) larvae. However, viability of the non-refrigerated was significantly greater from 7 through 21 days of culture. Significant differences were also observed in the percentage of DL3 between the non-refrigerated and refrigerated larval cultures by day 7. The highest percentage of DL3 larvae (22.5%) was reached at the end of study in those larvae that were not previously refrigerated. The data suggests that prior refrigeration decreases viability and slows L3 development. At day 21 LL3 larvae were only a small percentage of the DL3: 6.9 and 5% in non-refrigerated and refrigerated cultures, respectively. Few of these larvae freed themselves from the L3 cuticle and moulted to L4 stage. Characteristics of individual species in vitro developmental patterns were determined by the molecular identification of individual larvae in pools of larvae randomly collected at days 0 and 21. Seven species (Coronocyclus coronatus, Cylicostephanus goldi, Cylicostephanus longibursatus, Cyathostomum catinatum, Cylicocyclus nassatus, Cylicocyclus ashworthi, Petrovinema poculatum) were identified in the day 0 pool. The greatest tendency to develop in vitro was shown by the genus Cylicostephanus with the species C. goldi and C. longibursatus that developed to the LL3-L4 stages. C. nassatus, C. ashworthi and C. coronatus did not progress in their development beyond the EL3 stage, while no apparent signs of development were registered for C. catinatum.