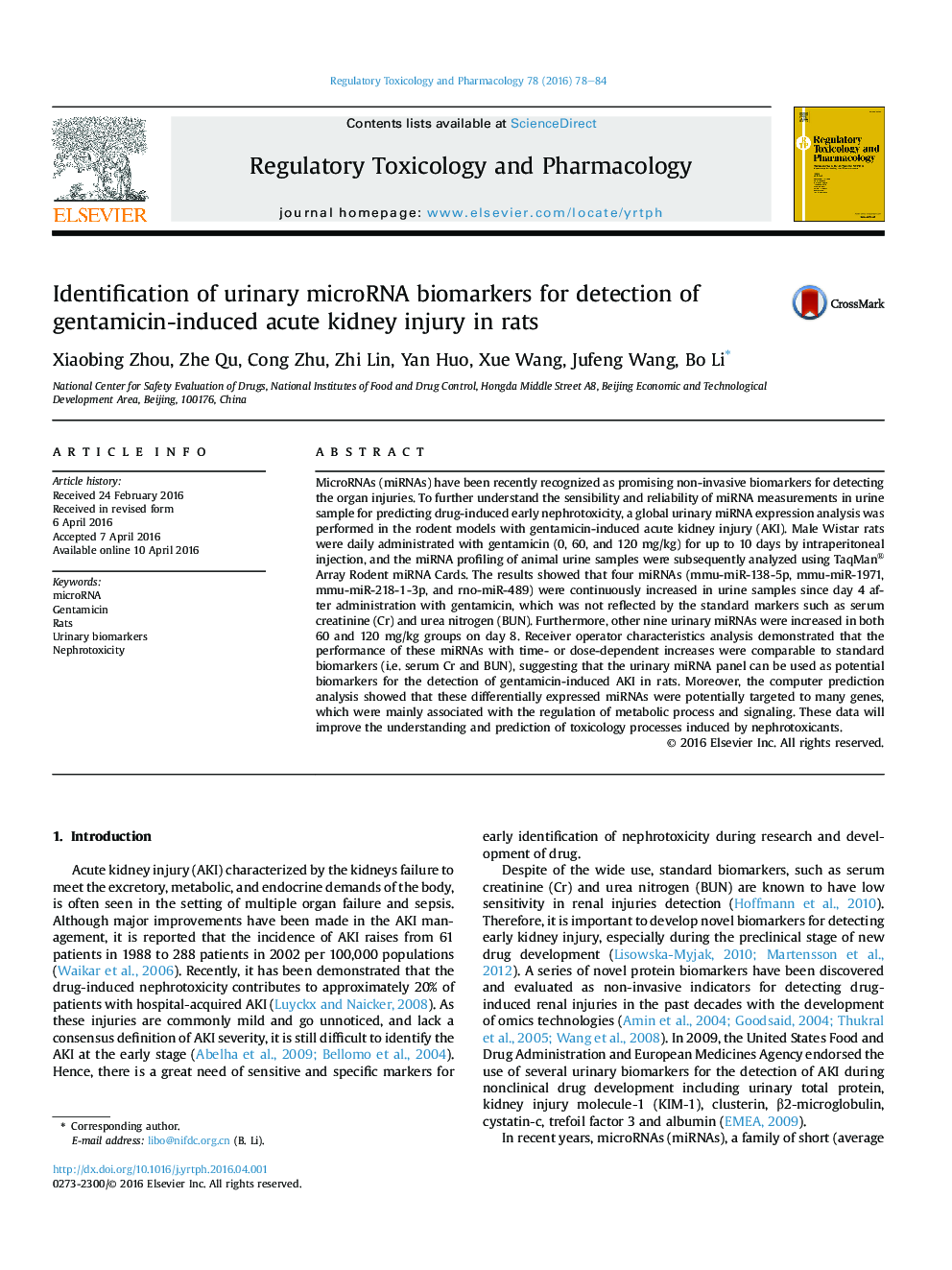 • 13 urinary miRNAs with time- or dose-dependency were identified in rat AKI model.
• Urinary miRNAs may serve as biomarkers for detection of drug-induced AKI in rats.
• Functional roles of candidate miRNAs were predicted.

MicroRNAs (miRNAs) have been recently recognized as promising non-invasive biomarkers for detecting the organ injuries. To further understand the sensibility and reliability of miRNA measurements in urine sample for predicting drug-induced early nephrotoxicity, a global urinary miRNA expression analysis was performed in the rodent models with gentamicin-induced acute kidney injury (AKI). Male Wistar rats were daily administrated with gentamicin (0, 60, and 120 mg/kg) for up to 10 days by intraperitoneal injection, and the miRNA profiling of animal urine samples were subsequently analyzed using TaqMan® Array Rodent miRNA Cards. The results showed that four miRNAs (mmu-miR-138-5p, mmu-miR-1971, mmu-miR-218-1-3p, and rno-miR-489) were continuously increased in urine samples since day 4 after administration with gentamicin, which was not reflected by the standard markers such as serum creatinine (Cr) and urea nitrogen (BUN). Furthermore, other nine urinary miRNAs were increased in both 60 and 120 mg/kg groups on day 8. Receiver operator characteristics analysis demonstrated that the performance of these miRNAs with time- or dose-dependent increases were comparable to standard biomarkers (i.e. serum Cr and BUN), suggesting that the urinary miRNA panel can be used as potential biomarkers for the detection of gentamicin-induced AKI in rats. Moreover, the computer prediction analysis showed that these differentially expressed miRNAs were potentially targeted to many genes, which were mainly associated with the regulation of metabolic process and signaling. These data will improve the understanding and prediction of toxicology processes induced by nephrotoxicants.