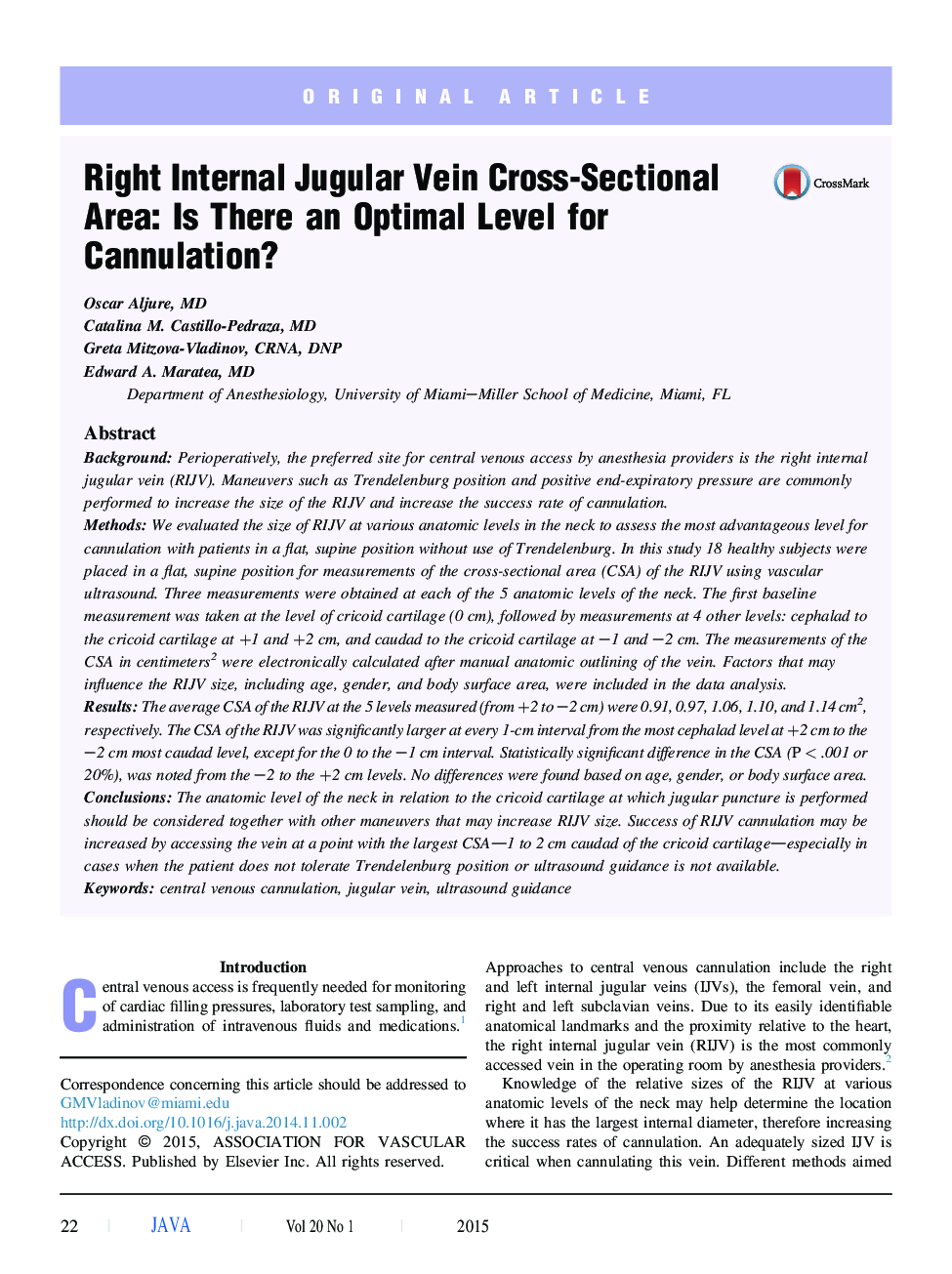 BackgroundPerioperatively, the preferred site for central venous access by anesthesia providers is the right internal jugular vein (RIJV). Maneuvers such as Trendelenburg position and positive end-expiratory pressure are commonly performed to increase the size of the RIJV and increase the success rate of cannulation.MethodsWe evaluated the size of RIJV at various anatomic levels in the neck to assess the most advantageous level for cannulation with patients in a flat, supine position without use of Trendelenburg. In this study 18 healthy subjects were placed in a flat, supine position for measurements of the cross-sectional area (CSA) of the RIJV using vascular ultrasound. Three measurements were obtained at each of the 5 anatomic levels of the neck. The first baseline measurement was taken at the level of cricoid cartilage (0 cm), followed by measurements at 4 other levels: cephalad to the cricoid cartilage at +1 and +2 cm, and caudad to the cricoid cartilage at –1 and –2 cm. The measurements of the CSA in centimeters2 were electronically calculated after manual anatomic outlining of the vein. Factors that may influence the RIJV size, including age, gender, and body surface area, were included in the data analysis.ResultsThe average CSA of the RIJV at the 5 levels measured (from +2 to –2 cm) were 0.91, 0.97, 1.06, 1.10, and 1.14 cm2, respectively. The CSA of the RIJV was significantly larger at every 1-cm interval from the most cephalad level at +2 cm to the –2 cm most caudad level, except for the 0 to the –1 cm interval. Statistically significant difference in the CSA (P < .001 or 20%), was noted from the –2 to the +2 cm levels. No differences were found based on age, gender, or body surface area.ConclusionsThe anatomic level of the neck in relation to the cricoid cartilage at which jugular puncture is performed should be considered together with other maneuvers that may increase RIJV size. Success of RIJV cannulation may be increased by accessing the vein at a point with the largest CSA—1 to 2 cm caudad of the cricoid cartilage—especially in cases when the patient does not tolerate Trendelenburg position or ultrasound guidance is not available.