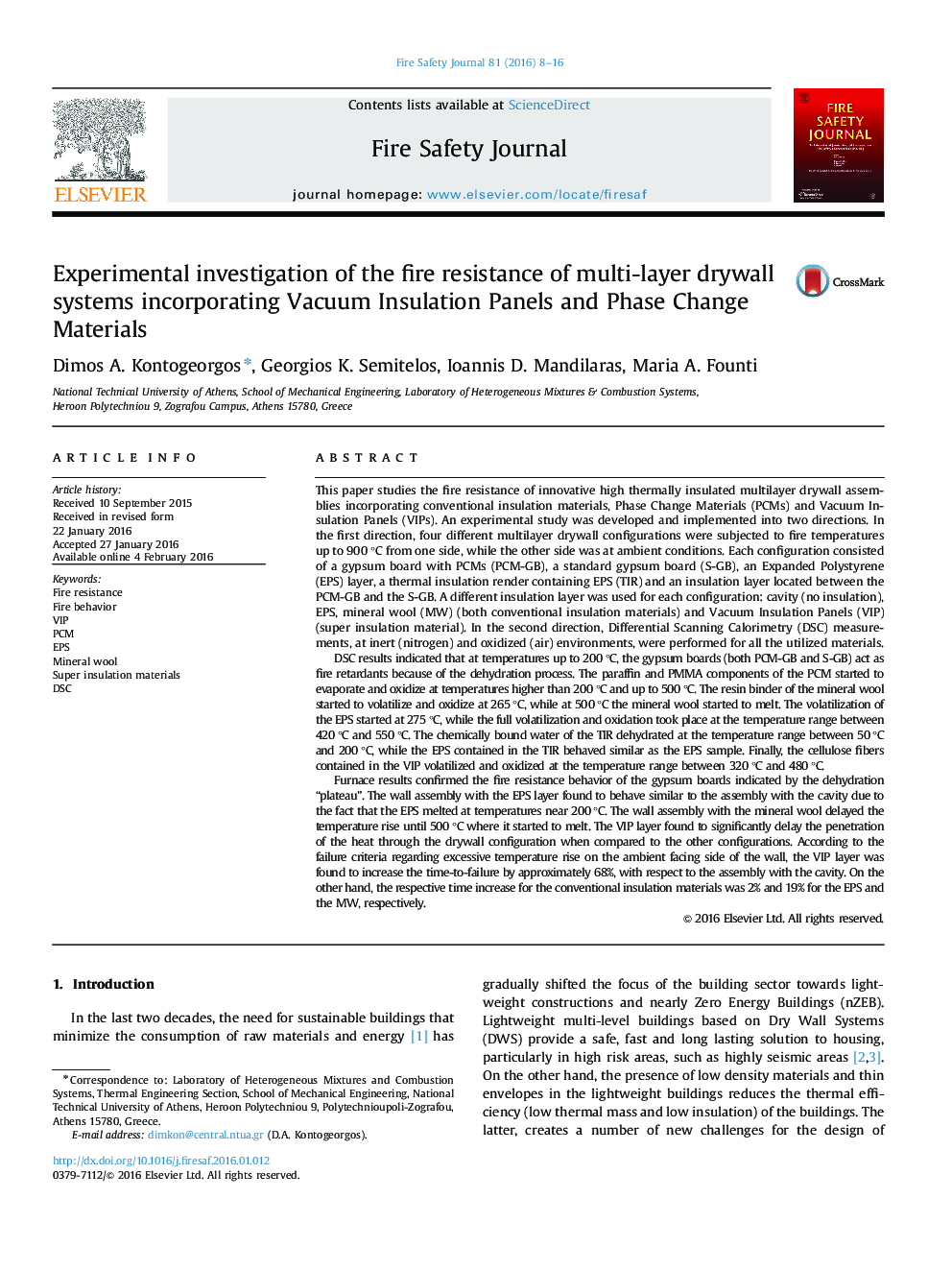 • The fire resistance of innovative wall assemblies is experimentally investigated.
• The wall assemblies incorporate Super Insulation and Phase Change Materials.
• The Phase Change Materials found to have exothermic behavior at high temperatures.
• The VIP significantly delayed the penetration of the heat through the assemblies.
• The VIP layer increased the time-to-failure by ca. 68%.

This paper studies the fire resistance of innovative high thermally insulated multilayer drywall assemblies incorporating conventional insulation materials, Phase Change Materials (PCMs) and Vacuum Insulation Panels (VIPs). An experimental study was developed and implemented into two directions. In the first direction, four different multilayer drywall configurations were subjected to fire temperatures up to 900 °C from one side, while the other side was at ambient conditions. Each configuration consisted of a gypsum board with PCMs (PCM-GB), a standard gypsum board (S-GB), an Expanded Polystyrene (EPS) layer, a thermal insulation render containing EPS (TIR) and an insulation layer located between the PCM-GB and the S-GB. A different insulation layer was used for each configuration: cavity (no insulation), EPS, mineral wool (MW) (both conventional insulation materials) and Vacuum Insulation Panels (VIP) (super insulation material). In the second direction, Differential Scanning Calorimetry (DSC) measurements, at inert (nitrogen) and oxidized (air) environments, were performed for all the utilized materials.DSC results indicated that at temperatures up to 200 °C, the gypsum boards (both PCM-GB and S-GB) act as fire retardants because of the dehydration process. The paraffin and PMMA components of the PCM started to evaporate and oxidize at temperatures higher than 200 °C and up to 500 °C. The resin binder of the mineral wool started to volatilize and oxidize at 265 °C, while at 500 °C the mineral wool started to melt. The volatilization of the EPS started at 275 °C, while the full volatilization and oxidation took place at the temperature range between 420 °C and 550 °C. The chemically bound water of the TIR dehydrated at the temperature range between 50 °C and 200 °C, while the EPS contained in the TIR behaved similar as the EPS sample. Finally, the cellulose fibers contained in the VIP volatilized and oxidized at the temperature range between 320 °C and 480 °C.Furnace results confirmed the fire resistance behavior of the gypsum boards indicated by the dehydration “plateau”. The wall assembly with the EPS layer found to behave similar to the assembly with the cavity due to the fact that the EPS melted at temperatures near 200 °C. The wall assembly with the mineral wool delayed the temperature rise until 500 °C where it started to melt. The VIP layer found to significantly delay the penetration of the heat through the drywall configuration when compared to the other configurations. According to the failure criteria regarding excessive temperature rise on the ambient facing side of the wall, the VIP layer was found to increase the time-to-failure by approximately 68%, with respect to the assembly with the cavity. On the other hand, the respective time increase for the conventional insulation materials was 2% and 19% for the EPS and the MW, respectively.