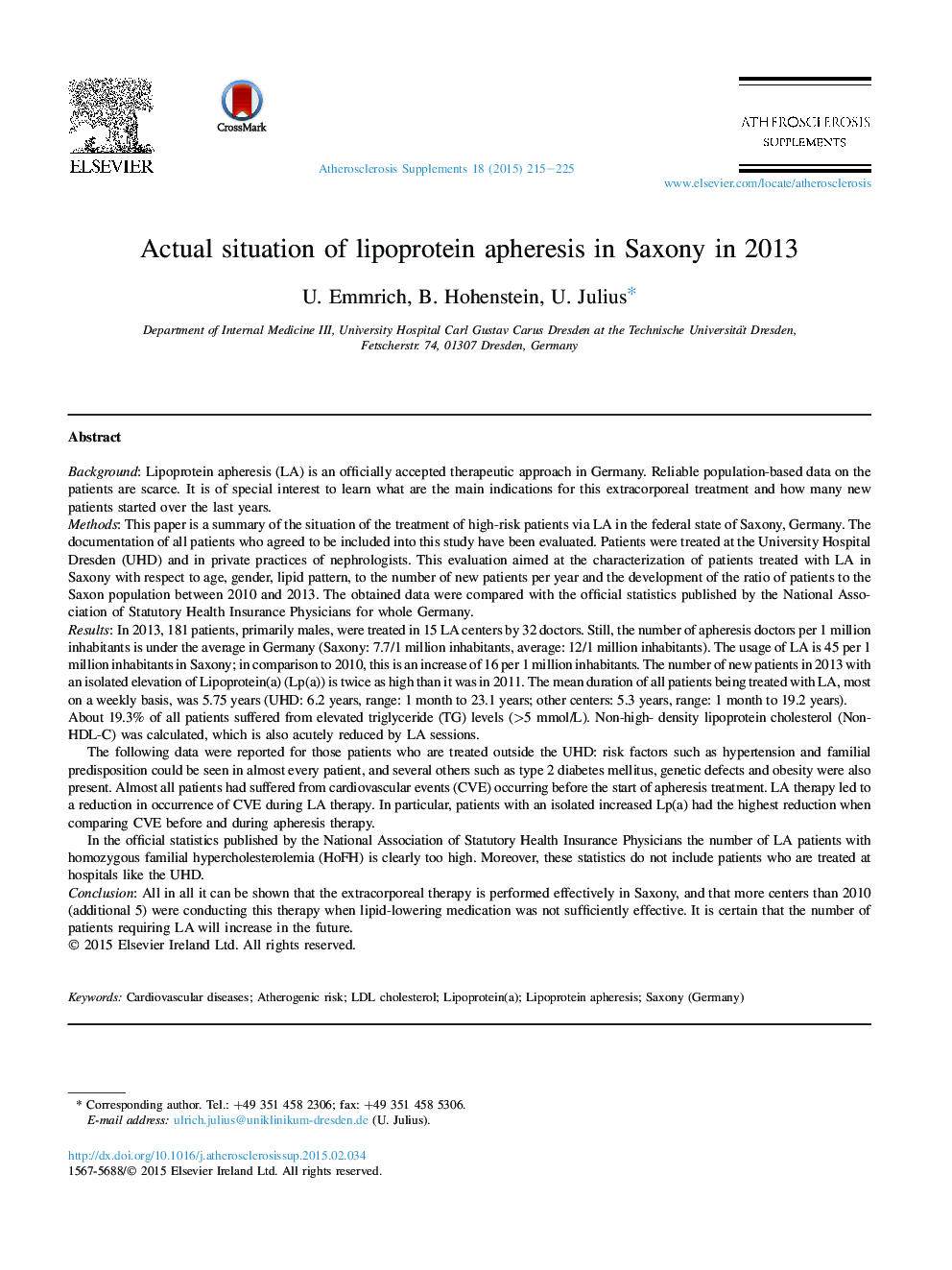 BackgroundLipoprotein apheresis (LA) is an officially accepted therapeutic approach in Germany. Reliable population-based data on the patients are scarce. It is of special interest to learn what are the main indications for this extracorporeal treatment and how many new patients started over the last years.MethodsThis paper is a summary of the situation of the treatment of high-risk patients via LA in the federal state of Saxony, Germany. The documentation of all patients who agreed to be included into this study have been evaluated. Patients were treated at the University Hospital Dresden (UHD) and in private practices of nephrologists. This evaluation aimed at the characterization of patients treated with LA in Saxony with respect to age, gender, lipid pattern, to the number of new patients per year and the development of the ratio of patients to the Saxon population between 2010 and 2013. The obtained data were compared with the official statistics published by the National Association of Statutory Health Insurance Physicians for whole Germany.ResultsIn 2013, 181 patients, primarily males, were treated in 15 LA centers by 32 doctors. Still, the number of apheresis doctors per 1 million inhabitants is under the average in Germany (Saxony: 7.7/1 million inhabitants, average: 12/1 million inhabitants). The usage of LA is 45 per 1 million inhabitants in Saxony; in comparison to 2010, this is an increase of 16 per 1 million inhabitants. The number of new patients in 2013 with an isolated elevation of Lipoprotein(a) (Lp(a)) is twice as high than it was in 2011. The mean duration of all patients being treated with LA, most on a weekly basis, was 5.75 years (UHD: 6.2 years, range: 1 month to 23.1 years; other centers: 5.3 years, range: 1 month to 19.2 years).About 19.3% of all patients suffered from elevated triglyceride (TG) levels (>5 mmol/L). Non-high- density lipoprotein cholesterol (Non-HDL-C) was calculated, which is also acutely reduced by LA sessions.The following data were reported for those patients who are treated outside the UHD: risk factors such as hypertension and familial predisposition could be seen in almost every patient, and several others such as type 2 diabetes mellitus, genetic defects and obesity were also present. Almost all patients had suffered from cardiovascular events (CVE) occurring before the start of apheresis treatment. LA therapy led to a reduction in occurrence of CVE during LA therapy. In particular, patients with an isolated increased Lp(a) had the highest reduction when comparing CVE before and during apheresis therapy.In the official statistics published by the National Association of Statutory Health Insurance Physicians the number of LA patients with homozygous familial hypercholesterolemia (HoFH) is clearly too high. Moreover, these statistics do not include patients who are treated at hospitals like the UHD.ConclusionAll in all it can be shown that the extracorporeal therapy is performed effectively in Saxony, and that more centers than 2010 (additional 5) were conducting this therapy when lipid-lowering medication was not sufficiently effective. It is certain that the number of patients requiring LA will increase in the future.