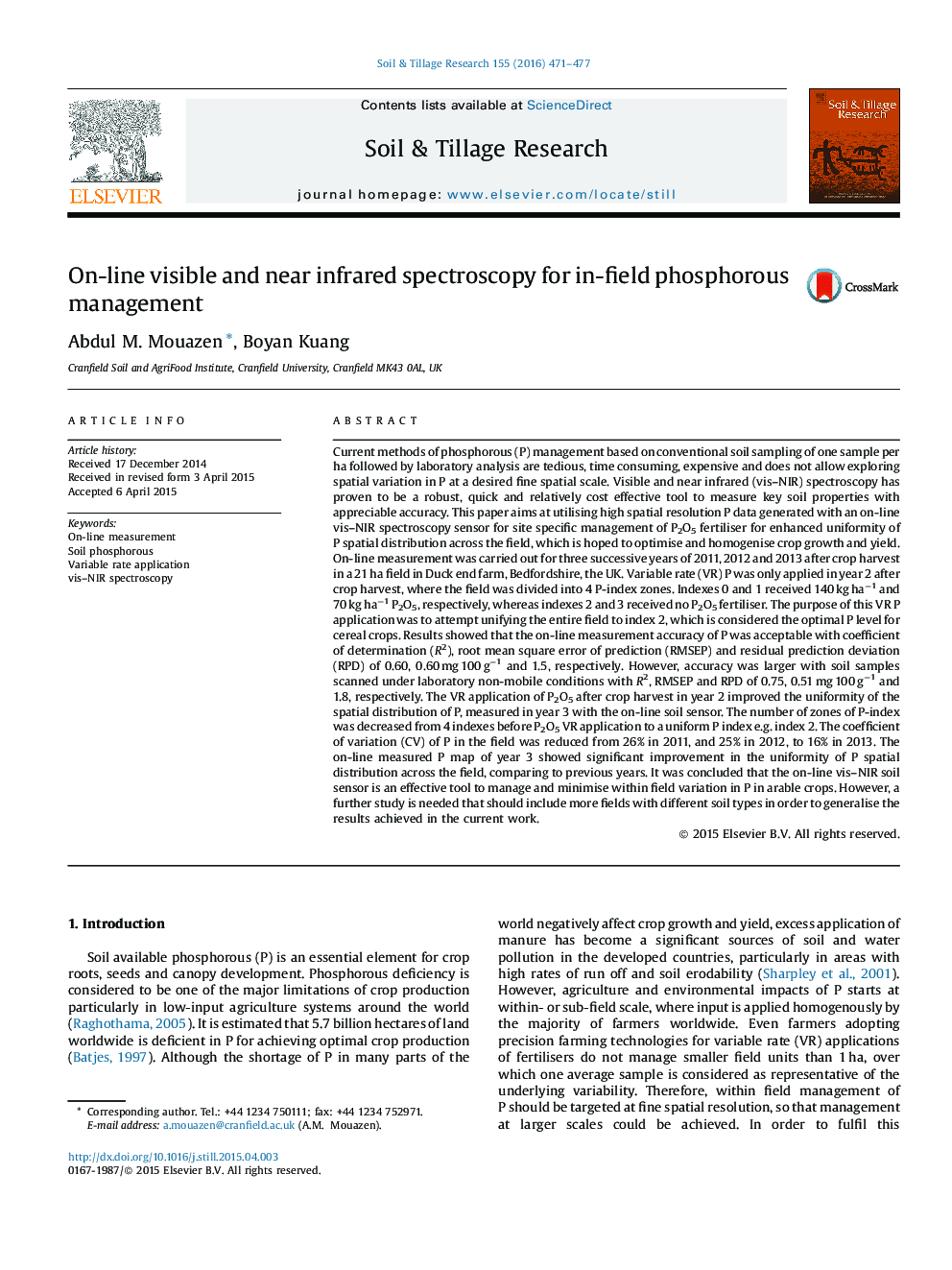 • On-line visible and near infrared spectroscopy is a good tool for mapping P variability.
• Heterogeneity in P distribution can be reduced by site specific application of P2O5.
• On-line vis–NIR sensor is a good tool to manage P in the field.

Current methods of phosphorous (P) management based on conventional soil sampling of one sample per ha followed by laboratory analysis are tedious, time consuming, expensive and does not allow exploring spatial variation in P at a desired fine spatial scale. Visible and near infrared (vis–NIR) spectroscopy has proven to be a robust, quick and relatively cost effective tool to measure key soil properties with appreciable accuracy. This paper aims at utilising high spatial resolution P data generated with an on-line vis–NIR spectroscopy sensor for site specific management of P2O5 fertiliser for enhanced uniformity of P spatial distribution across the field, which is hoped to optimise and homogenise crop growth and yield. On-line measurement was carried out for three successive years of 2011, 2012 and 2013 after crop harvest in a 21 ha field in Duck end farm, Bedfordshire, the UK. Variable rate (VR) P was only applied in year 2 after crop harvest, where the field was divided into 4 P-index zones. Indexes 0 and 1 received 140 kg ha−1 and 70 kg ha−1 P2O5, respectively, whereas indexes 2 and 3 received no P2O5 fertiliser. The purpose of this VR P application was to attempt unifying the entire field to index 2, which is considered the optimal P level for cereal crops.Resultsshowed that the on-line measurement accuracy of P was acceptable with coefficient of determination (R2), root mean square error of prediction (RMSEP) and residual prediction deviation (RPD) of 0.60, 0.60 mg 100 g−1 and 1.5, respectively. However, accuracy was larger with soil samples scanned under laboratory non-mobile conditions with R2, RMSEP and RPD of 0.75, 0.51 mg 100 g−1 and 1.8, respectively. The VR application of P2O5 after crop harvest in year 2 improved the uniformity of the spatial distribution of P, measured in year 3 with the on-line soil sensor. The number of zones of P-index was decreased from 4 indexes before P2O5 VR application to a uniform P index e.g. index 2. The coefficient of variation (CV) of P in the field was reduced from 26% in 2011, and 25% in 2012, to 16% in 2013. The on-line measured P map of year 3 showed significant improvement in the uniformity of P spatial distribution across the field, comparing to previous years. It was concluded that the on-line vis–NIR soil sensor is an effective tool to manage and minimise within field variation in P in arable crops. However, a further study is needed that should include more fields with different soil types in order to generalise the results achieved in the current work.