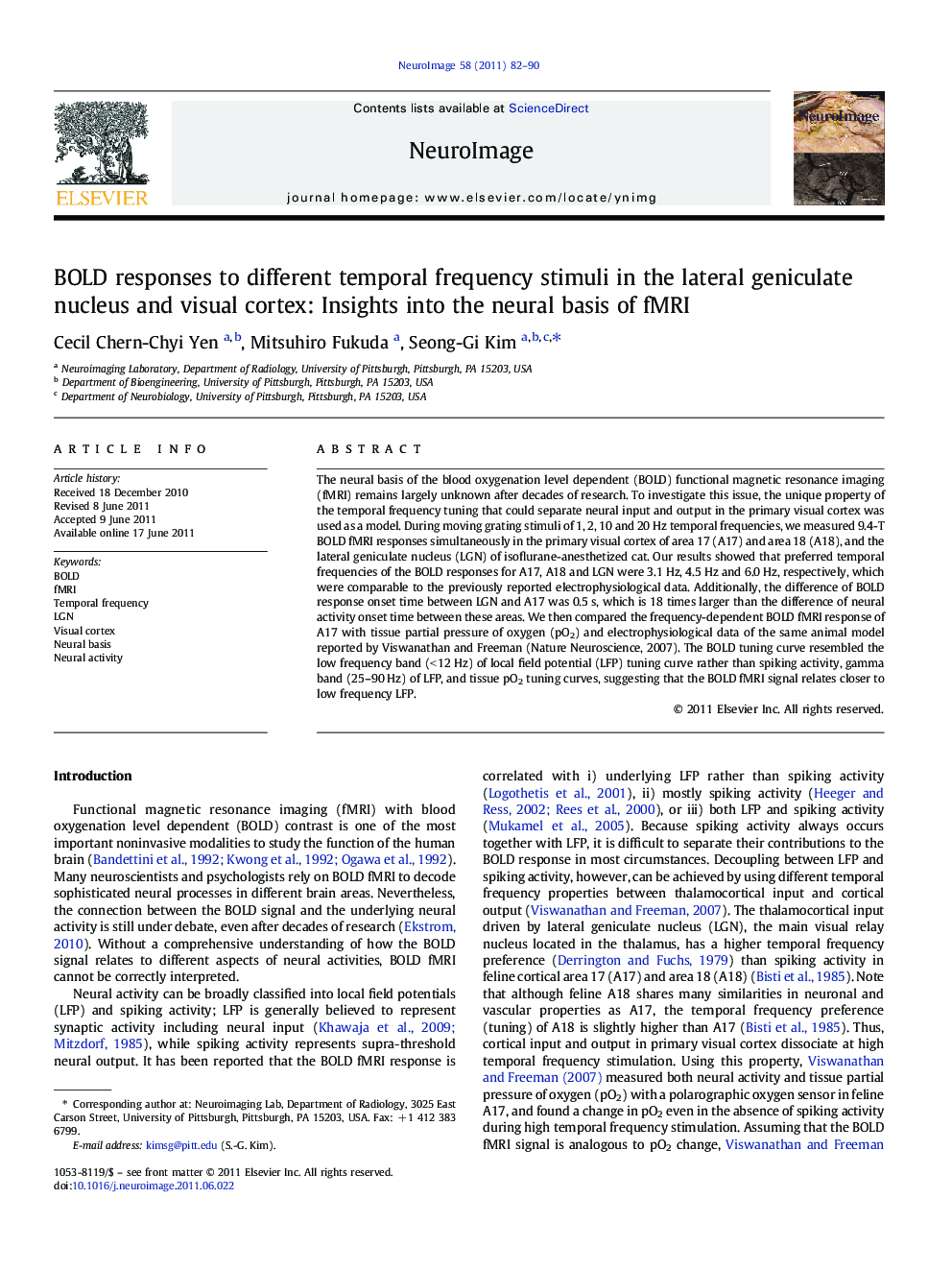 The neural basis of the blood oxygenation level dependent (BOLD) functional magnetic resonance imaging (fMRI) remains largely unknown after decades of research. To investigate this issue, the unique property of the temporal frequency tuning that could separate neural input and output in the primary visual cortex was used as a model. During moving grating stimuli of 1, 2, 10 and 20 Hz temporal frequencies, we measured 9.4-T BOLD fMRI responses simultaneously in the primary visual cortex of area 17 (A17) and area 18 (A18), and the lateral geniculate nucleus (LGN) of isoflurane-anesthetized cat. Our results showed that preferred temporal frequencies of the BOLD responses for A17, A18 and LGN were 3.1 Hz, 4.5 Hz and 6.0 Hz, respectively, which were comparable to the previously reported electrophysiological data. Additionally, the difference of BOLD response onset time between LGN and A17 was 0.5 s, which is 18 times larger than the difference of neural activity onset time between these areas. We then compared the frequency-dependent BOLD fMRI response of A17 with tissue partial pressure of oxygen (pO2) and electrophysiological data of the same animal model reported by Viswanathan and Freeman (Nature Neuroscience, 2007). The BOLD tuning curve resembled the low frequency band (< 12 Hz) of local field potential (LFP) tuning curve rather than spiking activity, gamma band (25–90 Hz) of LFP, and tissue pO2 tuning curves, suggesting that the BOLD fMRI signal relates closer to low frequency LFP.

Figure optionsDownload high-quality image (129 K)Download as PowerPoint slideResearch highlights
► BOLD fMRI data are obtained in LGN, A17 and A18 during temporal frequency stimuli.
► BOLD fMRI is able to detect difference in preferred frequency of LGN, A17 and A18.
► BOLD tuning curve more resembles LFP(Low) than LFP(gamma), spiking activity curves.