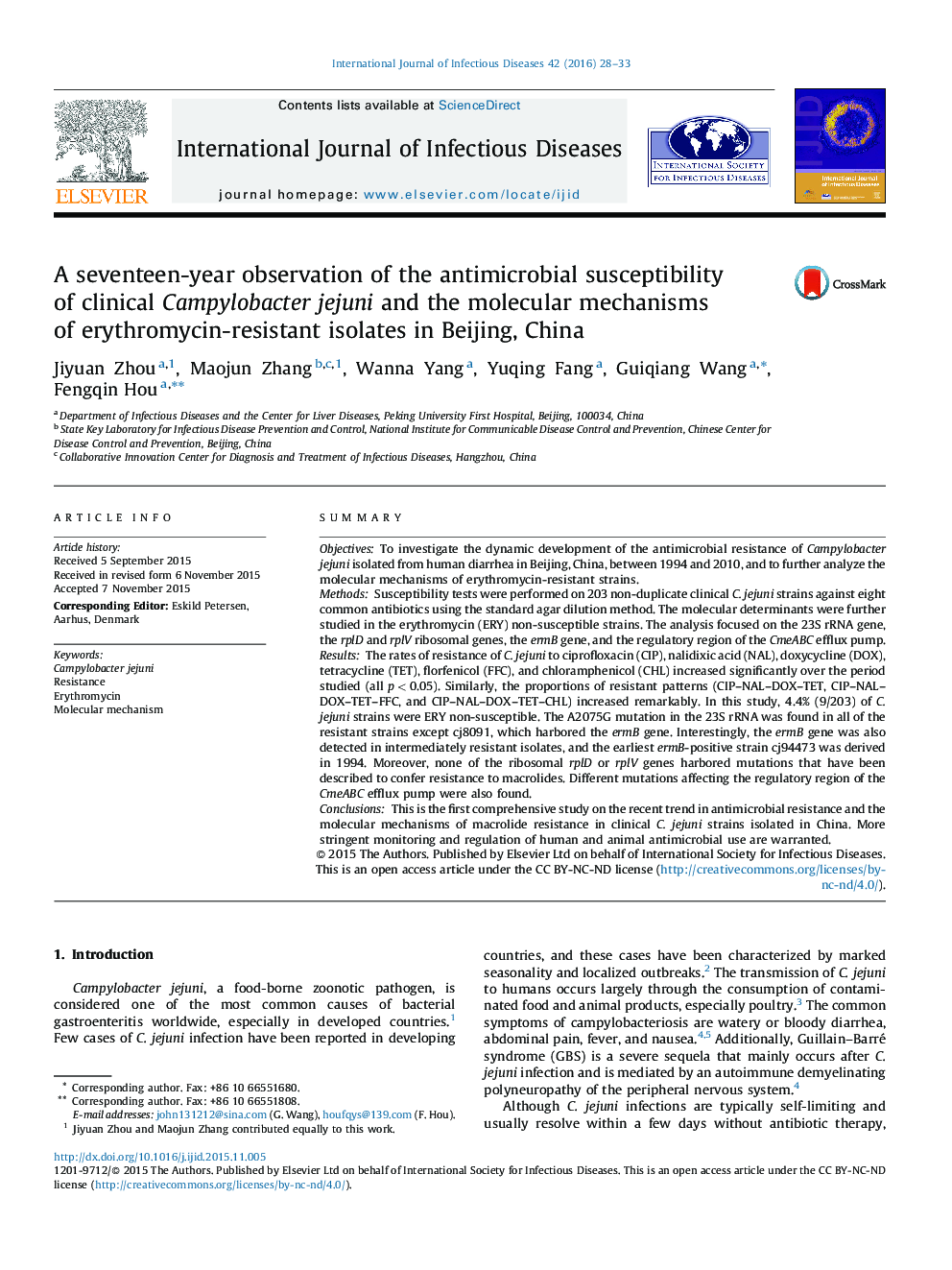 • Significantly increasing rates of antimicrobial resistance were found in clinical Campylobacter jejuni isolated in China between 1994 and 2010.
• Macrolides are still the most effective antibiotics for human campylobacteriosis in this region.
• The molecular mechanisms including 23S rRNA, ermB, and the regulatory region of the CmeABC operon might be involved in erythromycin resistance.
• This study revealed that more stringent monitoring and regulation of human and animal antimicrobial use is warranted in this region.

SummaryObjectivesTo investigate the dynamic development of the antimicrobial resistance of Campylobacter jejuni isolated from human diarrhea in Beijing, China, between 1994 and 2010, and to further analyze the molecular mechanisms of erythromycin-resistant strains.MethodsSusceptibility tests were performed on 203 non-duplicate clinical C. jejuni strains against eight common antibiotics using the standard agar dilution method. The molecular determinants were further studied in the erythromycin (ERY) non-susceptible strains. The analysis focused on the 23S rRNA gene, the rplD and rplV ribosomal genes, the ermB gene, and the regulatory region of the CmeABC efflux pump.ResultsThe rates of resistance of C. jejuni to ciprofloxacin (CIP), nalidixic acid (NAL), doxycycline (DOX), tetracycline (TET), florfenicol (FFC), and chloramphenicol (CHL) increased significantly over the period studied (all p < 0.05). Similarly, the proportions of resistant patterns (CIP–NAL–DOX–TET, CIP–NAL–DOX–TET–FFC, and CIP–NAL–DOX–TET–CHL) increased remarkably. In this study, 4.4% (9/203) of C. jejuni strains were ERY non-susceptible. The A2075G mutation in the 23S rRNA was found in all of the resistant strains except cj8091, which harbored the ermB gene. Interestingly, the ermB gene was also detected in intermediately resistant isolates, and the earliest ermB-positive strain cj94473 was derived in 1994. Moreover, none of the ribosomal rplD or rplV genes harbored mutations that have been described to confer resistance to macrolides. Different mutations affecting the regulatory region of the CmeABC efflux pump were also found.ConclusionsThis is the first comprehensive study on the recent trend in antimicrobial resistance and the molecular mechanisms of macrolide resistance in clinical C. jejuni strains isolated in China. More stringent monitoring and regulation of human and animal antimicrobial use are warranted.