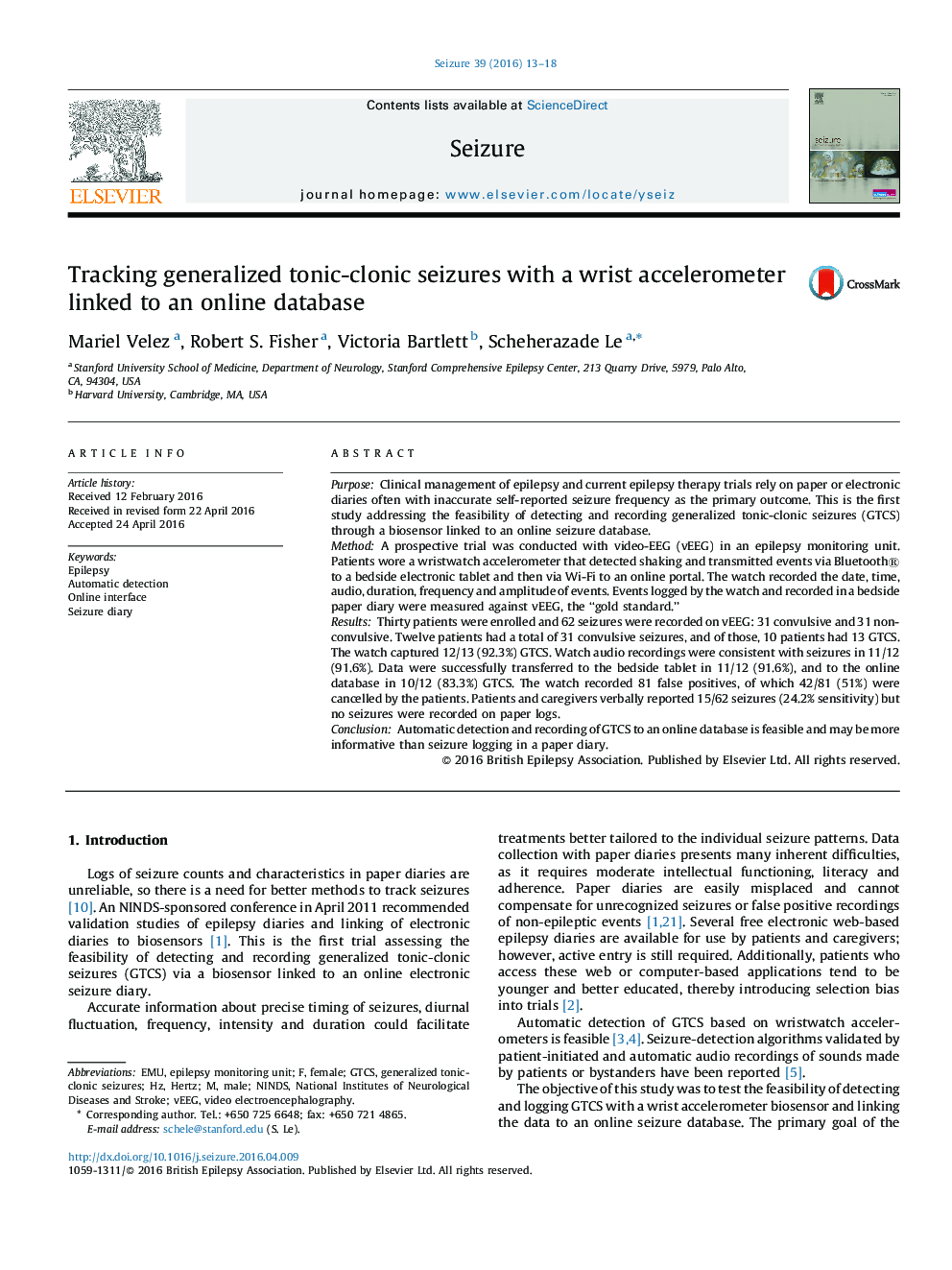 • Patients and caregivers often fail to log seizures in a paper diary.
• Comparison of seizure detection between biosensor versus paper diary against vEEG.
• Biosensor was sensitive and automatically detected and recorded GTC seizures.
• Automatic capture of GTC seizures was much more effective than a paper diary.

PurposeClinical management of epilepsy and current epilepsy therapy trials rely on paper or electronic diaries often with inaccurate self-reported seizure frequency as the primary outcome. This is the first study addressing the feasibility of detecting and recording generalized tonic-clonic seizures (GTCS) through a biosensor linked to an online seizure database.MethodA prospective trial was conducted with video-EEG (vEEG) in an epilepsy monitoring unit. Patients wore a wristwatch accelerometer that detected shaking and transmitted events via Bluetooth® to a bedside electronic tablet and then via Wi-Fi to an online portal. The watch recorded the date, time, audio, duration, frequency and amplitude of events. Events logged by the watch and recorded in a bedside paper diary were measured against vEEG, the “gold standard.”ResultsThirty patients were enrolled and 62 seizures were recorded on vEEG: 31 convulsive and 31 non-convulsive. Twelve patients had a total of 31 convulsive seizures, and of those, 10 patients had 13 GTCS. The watch captured 12/13 (92.3%) GTCS. Watch audio recordings were consistent with seizures in 11/12 (91.6%). Data were successfully transferred to the bedside tablet in 11/12 (91.6%), and to the online database in 10/12 (83.3%) GTCS. The watch recorded 81 false positives, of which 42/81 (51%) were cancelled by the patients. Patients and caregivers verbally reported 15/62 seizures (24.2% sensitivity) but no seizures were recorded on paper logs.ConclusionAutomatic detection and recording of GTCS to an online database is feasible and may be more informative than seizure logging in a paper diary.