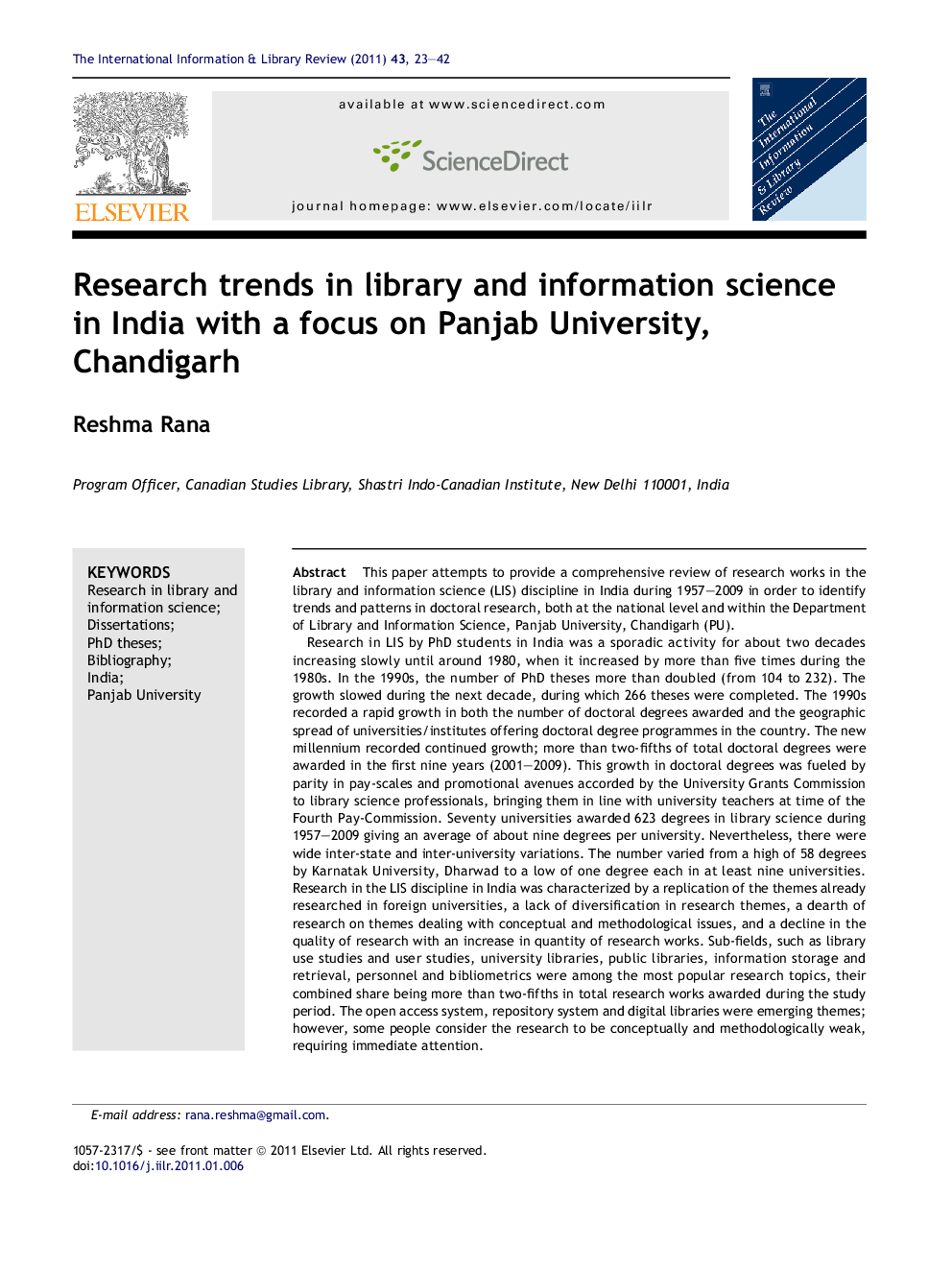 This paper attempts to provide a comprehensive review of research works in the library and information science (LIS) discipline in India during 1957–2009 in order to identify trends and patterns in doctoral research, both at the national level and within the Department of Library and Information Science, Panjab University, Chandigarh (PU).Research in LIS by PhD students in India was a sporadic activity for about two decades increasing slowly until around 1980, when it increased by more than five times during the 1980s. In the 1990s, the number of PhD theses more than doubled (from 104 to 232). The growth slowed during the next decade, during which 266 theses were completed. The 1990s recorded a rapid growth in both the number of doctoral degrees awarded and the geographic spread of universities/institutes offering doctoral degree programmes in the country. The new millennium recorded continued growth; more than two-fifths of total doctoral degrees were awarded in the first nine years (2001–2009). This growth in doctoral degrees was fueled by parity in pay-scales and promotional avenues accorded by the University Grants Commission to library science professionals, bringing them in line with university teachers at time of the Fourth Pay-Commission. Seventy universities awarded 623 degrees in library science during 1957–2009 giving an average of about nine degrees per university. Nevertheless, there were wide inter-state and inter-university variations. The number varied from a high of 58 degrees by Karnatak University, Dharwad to a low of one degree each in at least nine universities. Research in the LIS discipline in India was characterized by a replication of the themes already researched in foreign universities, a lack of diversification in research themes, a dearth of research on themes dealing with conceptual and methodological issues, and a decline in the quality of research with an increase in quantity of research works. Sub-fields, such as library use studies and user studies, university libraries, public libraries, information storage and retrieval, personnel and bibliometrics were among the most popular research topics, their combined share being more than two-fifths in total research works awarded during the study period. The open access system, repository system and digital libraries were emerging themes; however, some people consider the research to be conceptually and methodologically weak, requiring immediate attention.With forty-one doctoral degrees to its credit, PU is one of the three top universities in India in terms of the number of doctoral degrees awarded. Similar to the trends at the national level, progress remained slow up until 1980 and picked up rapidly during the 1990s. The new millennium brought a phase of rapid growth, with more than two-fifths of total doctoral degrees awarded in the last nine years. With one year remaining, the current decade is likely to make a new history in library science at PU. Thematically, while only about two-fifths of the research sub-fields explored in PhD dissertations at the national level have been examined so far at PU, the diversity of sub-fields and the focus on emerging themes were more marked at PU than at the national level. Diversity of themes and use of scientific methods in research, as a marked feature of doctoral dissertations at PU in recent years, prompted one of the researchers to formulate as many as twenty hypotheses for empirical testing. Interestingly, six of the ten theses awarded between 2000 and 2003 in the department contained themes either focusing on Iran or comparing Iran with India. This was indicative of the department’s popularity with foreign students, especially Iranians. Another interesting feature was that two of the teachers in the department supervised more than a half of the total PhD theses awarded up to 2009.