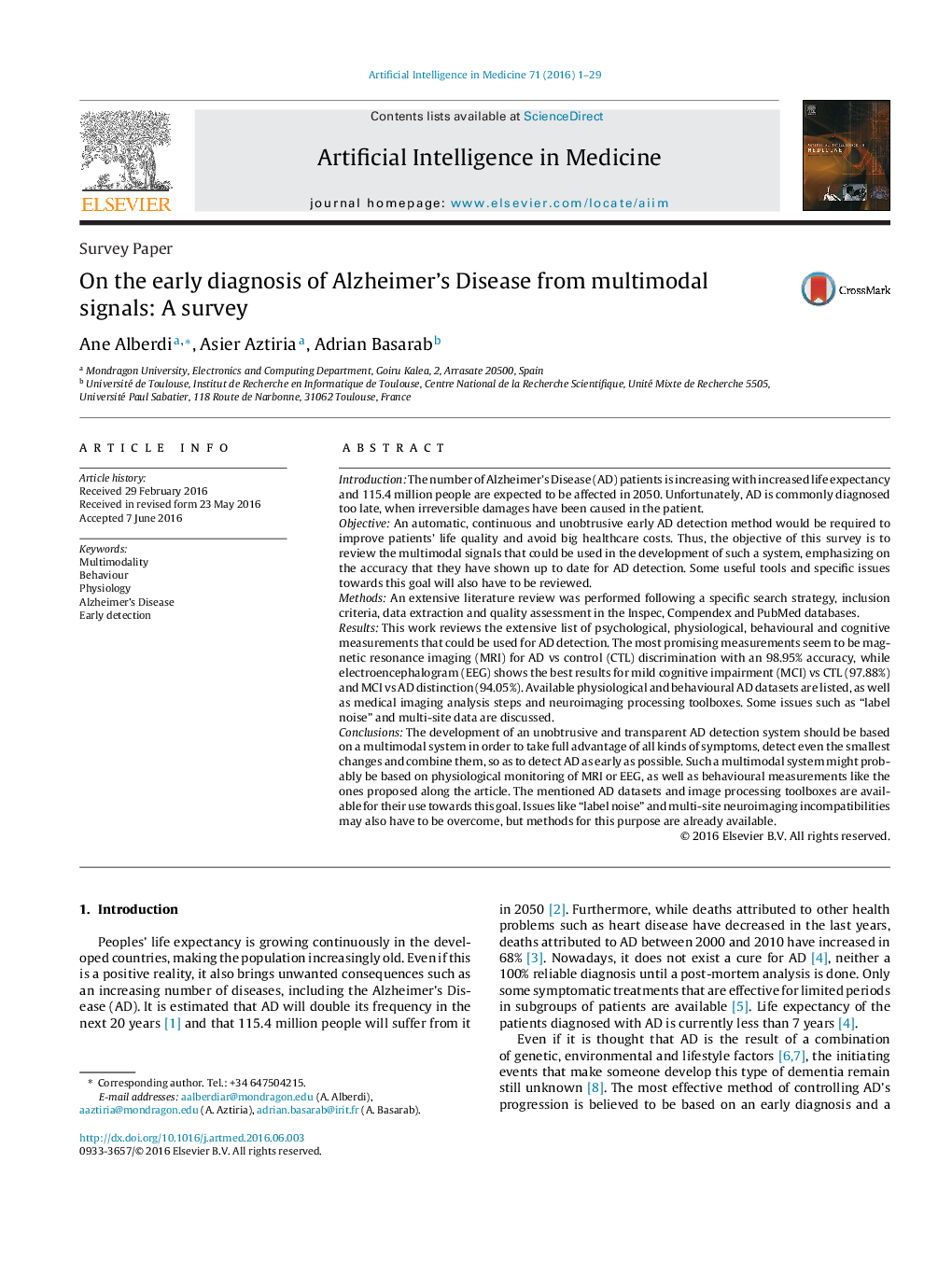 • A global overview of AD is given and a taxonomy of its symptoms is presented.
• Cognitive, psychological, physiological and behavioural AD symptoms’ measurements are reviewed.
• AD detection accuracy achieved up-to-date with signals and measurements of different modalities is reported.
• Research gaps of the current state of the art in early AD detection are highlighted.
• Useful tools for AD research are summarized, as well as some common issues of real-world multimodal databases.

IntroductionThe number of Alzheimer's Disease (AD) patients is increasing with increased life expectancy and 115.4 million people are expected to be affected in 2050. Unfortunately, AD is commonly diagnosed too late, when irreversible damages have been caused in the patient.ObjectiveAn automatic, continuous and unobtrusive early AD detection method would be required to improve patients’ life quality and avoid big healthcare costs. Thus, the objective of this survey is to review the multimodal signals that could be used in the development of such a system, emphasizing on the accuracy that they have shown up to date for AD detection. Some useful tools and specific issues towards this goal will also have to be reviewed.MethodsAn extensive literature review was performed following a specific search strategy, inclusion criteria, data extraction and quality assessment in the Inspec, Compendex and PubMed databases.ResultsThis work reviews the extensive list of psychological, physiological, behavioural and cognitive measurements that could be used for AD detection. The most promising measurements seem to be magnetic resonance imaging (MRI) for AD vs control (CTL) discrimination with an 98.95% accuracy, while electroencephalogram (EEG) shows the best results for mild cognitive impairment (MCI) vs CTL (97.88%) and MCI vs AD distinction (94.05%). Available physiological and behavioural AD datasets are listed, as well as medical imaging analysis steps and neuroimaging processing toolboxes. Some issues such as “label noise” and multi-site data are discussed.ConclusionsThe development of an unobtrusive and transparent AD detection system should be based on a multimodal system in order to take full advantage of all kinds of symptoms, detect even the smallest changes and combine them, so as to detect AD as early as possible. Such a multimodal system might probably be based on physiological monitoring of MRI or EEG, as well as behavioural measurements like the ones proposed along the article. The mentioned AD datasets and image processing toolboxes are available for their use towards this goal. Issues like “label noise” and multi-site neuroimaging incompatibilities may also have to be overcome, but methods for this purpose are already available.