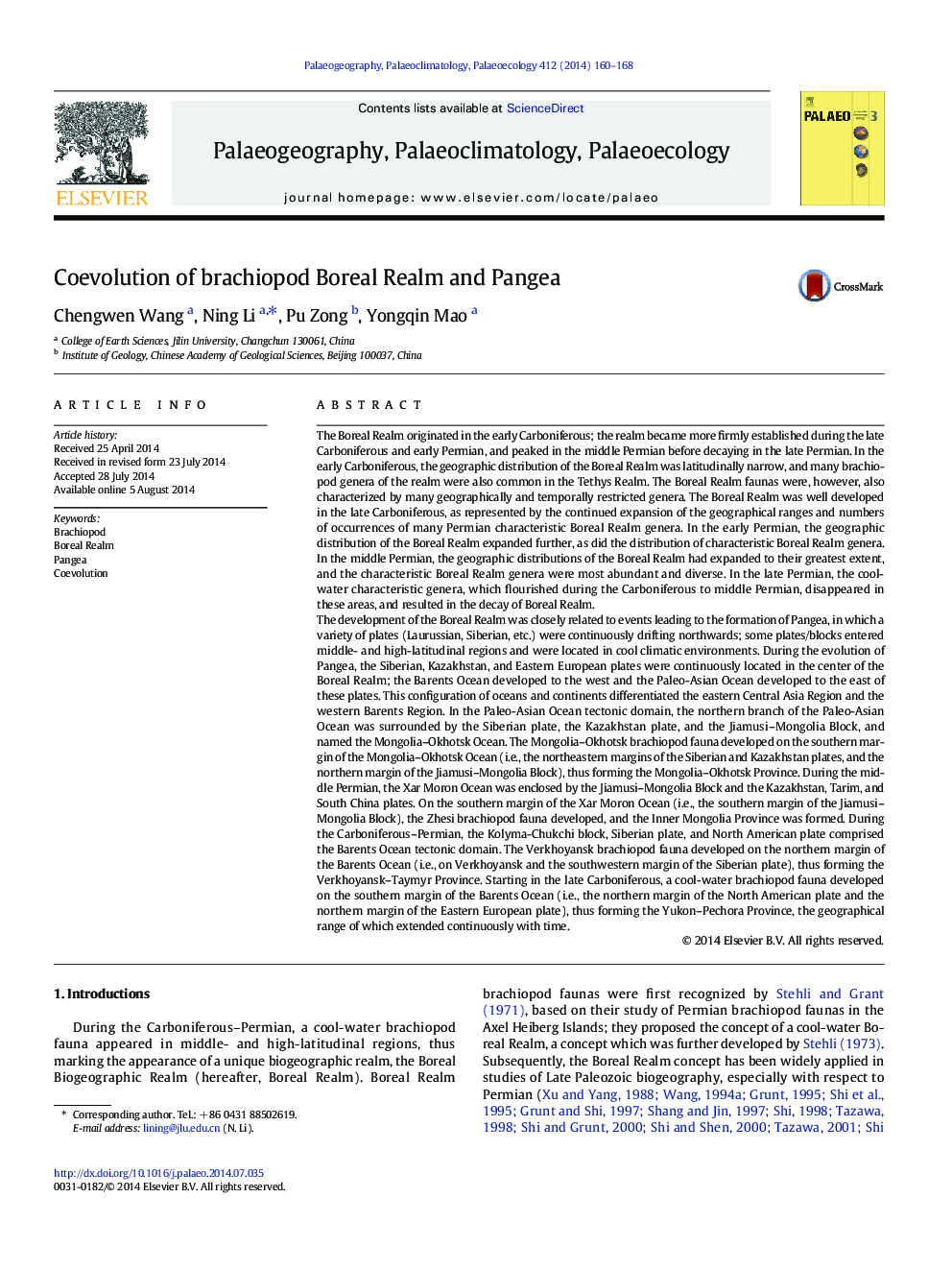 The Boreal Realm originated in the early Carboniferous; the realm became more firmly established during the late Carboniferous and early Permian, and peaked in the middle Permian before decaying in the late Permian. In the early Carboniferous, the geographic distribution of the Boreal Realm was latitudinally narrow, and many brachiopod genera of the realm were also common in the Tethys Realm. The Boreal Realm faunas were, however, also characterized by many geographically and temporally restricted genera. The Boreal Realm was well developed in the late Carboniferous, as represented by the continued expansion of the geographical ranges and numbers of occurrences of many Permian characteristic Boreal Realm genera. In the early Permian, the geographic distribution of the Boreal Realm expanded further, as did the distribution of characteristic Boreal Realm genera. In the middle Permian, the geographic distributions of the Boreal Realm had expanded to their greatest extent, and the characteristic Boreal Realm genera were most abundant and diverse. In the late Permian, the cool-water characteristic genera, which flourished during the Carboniferous to middle Permian, disappeared in these areas, and resulted in the decay of Boreal Realm.The development of the Boreal Realm was closely related to events leading to the formation of Pangea, in which a variety of plates (Laurussian, Siberian, etc.) were continuously drifting northwards; some plates/blocks entered middle- and high-latitudinal regions and were located in cool climatic environments. During the evolution of Pangea, the Siberian, Kazakhstan, and Eastern European plates were continuously located in the center of the Boreal Realm; the Barents Ocean developed to the west and the Paleo-Asian Ocean developed to the east of these plates. This configuration of oceans and continents differentiated the eastern Central Asia Region and the western Barents Region. In the Paleo-Asian Ocean tectonic domain, the northern branch of the Paleo-Asian Ocean was surrounded by the Siberian plate, the Kazakhstan plate, and the Jiamusi–Mongolia Block, and named the Mongolia–Okhotsk Ocean. The Mongolia–Okhotsk brachiopod fauna developed on the southern margin of the Mongolia–Okhotsk Ocean (i.e., the northeastern margins of the Siberian and Kazakhstan plates, and the northern margin of the Jiamusi–Mongolia Block), thus forming the Mongolia–Okhotsk Province. During the middle Permian, the Xar Moron Ocean was enclosed by the Jiamusi–Mongolia Block and the Kazakhstan, Tarim, and South China plates. On the southern margin of the Xar Moron Ocean (i.e., the southern margin of the Jiamusi–Mongolia Block), the Zhesi brachiopod fauna developed, and the Inner Mongolia Province was formed. During the Carboniferous–Permian, the Kolyma-Chukchi block, Siberian plate, and North American plate comprised the Barents Ocean tectonic domain. The Verkhoyansk brachiopod fauna developed on the northern margin of the Barents Ocean (i.e., on Verkhoyansk and the southwestern margin of the Siberian plate), thus forming the Verkhoyansk–Taymyr Province. Starting in the late Carboniferous, a cool-water brachiopod fauna developed on the southern margin of the Barents Ocean (i.e., the northern margin of the North American plate and the northern margin of the Eastern European plate), thus forming the Yukon–Pechora Province, the geographical range of which extended continuously with time.