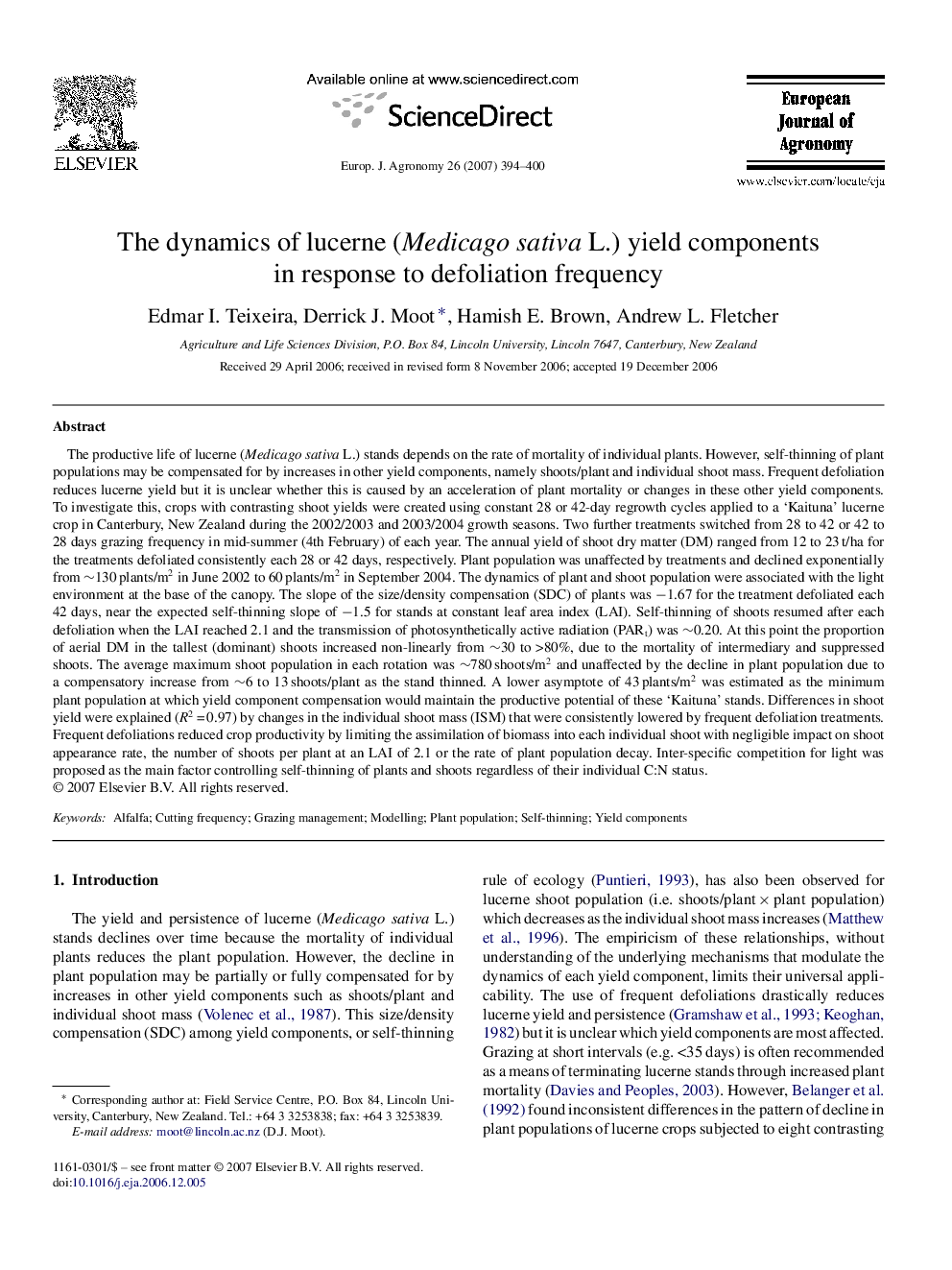 The productive life of lucerne (Medicago sativa L.) stands depends on the rate of mortality of individual plants. However, self-thinning of plant populations may be compensated for by increases in other yield components, namely shoots/plant and individual shoot mass. Frequent defoliation reduces lucerne yield but it is unclear whether this is caused by an acceleration of plant mortality or changes in these other yield components. To investigate this, crops with contrasting shoot yields were created using constant 28 or 42-day regrowth cycles applied to a ‘Kaituna’ lucerne crop in Canterbury, New Zealand during the 2002/2003 and 2003/2004 growth seasons. Two further treatments switched from 28 to 42 or 42 to 28 days grazing frequency in mid-summer (4th February) of each year. The annual yield of shoot dry matter (DM) ranged from 12 to 23 t/ha for the treatments defoliated consistently each 28 or 42 days, respectively. Plant population was unaffected by treatments and declined exponentially from ∼130 plants/m2 in June 2002 to 60 plants/m2 in September 2004. The dynamics of plant and shoot population were associated with the light environment at the base of the canopy. The slope of the size/density compensation (SDC) of plants was −1.67 for the treatment defoliated each 42 days, near the expected self-thinning slope of −1.5 for stands at constant leaf area index (LAI). Self-thinning of shoots resumed after each defoliation when the LAI reached 2.1 and the transmission of photosynthetically active radiation (PARt) was ∼0.20. At this point the proportion of aerial DM in the tallest (dominant) shoots increased non-linearly from ∼30 to >80%, due to the mortality of intermediary and suppressed shoots. The average maximum shoot population in each rotation was ∼780 shoots/m2 and unaffected by the decline in plant population due to a compensatory increase from ∼6 to 13 shoots/plant as the stand thinned. A lower asymptote of 43 plants/m2 was estimated as the minimum plant population at which yield component compensation would maintain the productive potential of these ‘Kaituna’ stands. Differences in shoot yield were explained (R2 = 0.97) by changes in the individual shoot mass (ISM) that were consistently lowered by frequent defoliation treatments. Frequent defoliations reduced crop productivity by limiting the assimilation of biomass into each individual shoot with negligible impact on shoot appearance rate, the number of shoots per plant at an LAI of 2.1 or the rate of plant population decay. Inter-specific competition for light was proposed as the main factor controlling self-thinning of plants and shoots regardless of their individual C:N status.