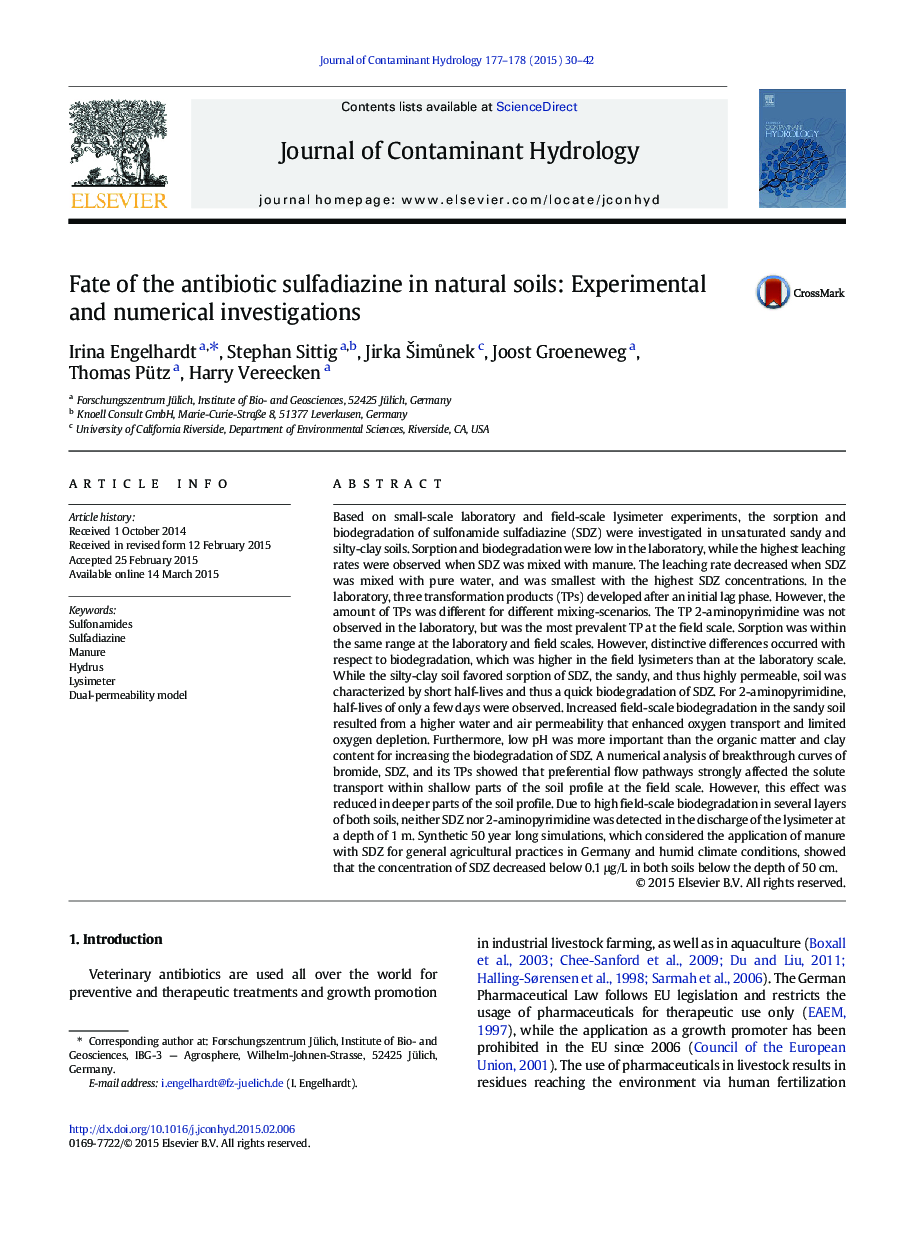 Based on small-scale laboratory and field-scale lysimeter experiments, the sorption and biodegradation of sulfonamide sulfadiazine (SDZ) were investigated in unsaturated sandy and silty-clay soils. Sorption and biodegradation were low in the laboratory, while the highest leaching rates were observed when SDZ was mixed with manure. The leaching rate decreased when SDZ was mixed with pure water, and was smallest with the highest SDZ concentrations. In the laboratory, three transformation products (TPs) developed after an initial lag phase. However, the amount of TPs was different for different mixing-scenarios. The TP 2-aminopyrimidine was not observed in the laboratory, but was the most prevalent TP at the field scale. Sorption was within the same range at the laboratory and field scales. However, distinctive differences occurred with respect to biodegradation, which was higher in the field lysimeters than at the laboratory scale. While the silty-clay soil favored sorption of SDZ, the sandy, and thus highly permeable, soil was characterized by short half-lives and thus a quick biodegradation of SDZ. For 2-aminopyrimidine, half-lives of only a few days were observed. Increased field-scale biodegradation in the sandy soil resulted from a higher water and air permeability that enhanced oxygen transport and limited oxygen depletion. Furthermore, low pH was more important than the organic matter and clay content for increasing the biodegradation of SDZ. A numerical analysis of breakthrough curves of bromide, SDZ, and its TPs showed that preferential flow pathways strongly affected the solute transport within shallow parts of the soil profile at the field scale. However, this effect was reduced in deeper parts of the soil profile. Due to high field-scale biodegradation in several layers of both soils, neither SDZ nor 2-aminopyrimidine was detected in the discharge of the lysimeter at a depth of 1 m. Synthetic 50 year long simulations, which considered the application of manure with SDZ for general agricultural practices in Germany and humid climate conditions, showed that the concentration of SDZ decreased below 0.1 μg/L in both soils below the depth of 50 cm.